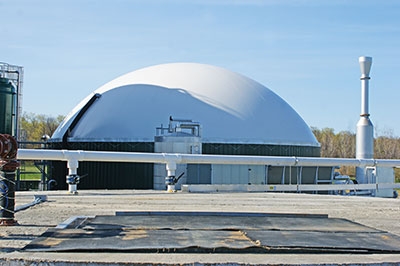 Starting January 17, $20 million has been made available through the New York State Energy Research and Development Authority (NYSERDA) to install anaerobic digester technology that produces renewable biogas used to produce electricity and heat from organic wastes. Farms, food processing manufacturers or municipal wastewater sites would be eligible for up to $2 million per project.

Biogas-to-power technology has several steps. Dairy manure and other organic wastes are pumped into digestion tanks where bacteria break down the waste, creating a methane-rich gas called biogas and a nutrient-rich effluent that can be applied to crops as fertilizer. The biogas is burned in engines to produce electricity and heat. Through this process, farmers can often eliminate a significant portion of the electricity they would otherwise purchase from the utility grid, and periodically export surplus electricity onto the electrical grid in exchange for credits. Furthermore, farmers can realize operational savings in other areas as well.

Over the past 10 years, NYSERDA and the New York Power Authority have awarded nearly $30 million toward anaerobic digestion projects and related technology, resulting in significant energy savings to New York-based businesses while reducing the use of fossil fuel. Currently, this funding supports 20 operational digester projects. The digester technology funding will be available on a first-come, first-served basis for eligible projects.

“The anaerobic digester funding coupled with the Dairy Acceleration Program funding is another step the state is taking … to assist farmers in reducing their operating costs and in generating clean energy,” said John B. Rhodes, president and CEO of NYSERDA. “Farmers that utilize anaerobic digester technology are able to produce renewable energy and lower their costs while providing a number of environmental benefits to their local communities.”

Funding for NY’s Dairy Acceleration Program (DAP) will be increased by $850,000, which is in addition to the $1 million announced this past August. DAP is jointly funded by the Department of Agriculture and Markets and DEC. DAP is resonating very positively with dairy farmers across the state, most with herds under 300 cows. Combined with some funding still available under the current program, this new funding will serve at least 100 more dairy farms across New York.

Payments under DAP may include: up to $5,000 per farm to write a business plan or develop a combination of a business and facility growth plan; and up to $4,500 to update an existing Comprehensive Nutrient Management Plan (CNMP) or $6,000 to develop a new one. Additional funds also will be available to design farm practices described in CNMPs. CNMPs are a conservation system for animal feeding operations designed to address soil erosion and water quality concerns. The CNMP encompasses the storage and handling of manure as well as using and applying manure nutrients on farmland. Through DAP, the state awarded dozens of projects already for farms with an average herd of about 140 cows.

To be eligible for DAP, a dairy farm must have complete financial records. Preference will be given to farms with under 300 cows. DAP funding will cover up to 80 percent of a project’s cost.

To apply for DAP, visit http://ansci.cornell.edu/prodairy/dairy_acceleration/.