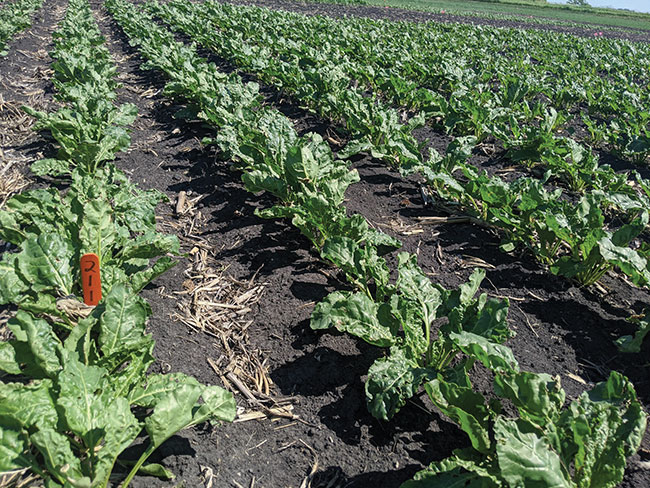 Sugarbeet growers in Minnesota and North Dakota hope new research into liquid manure application will net them a sweet return.

Professor Melissa Wilson, a manure management specialist at the University of Minnesota Extension, is leading a four-year project in which liquid dairy manure is applied to sugarbeet, corn and soybean crops at a pair of test sites in Minnesota.

“We have all the crops within the rotation, we have manure in front of each one individually and we’ll get to see which rotation does the best,” Wilson says. “That way we can see where we get the best bang for our buck – economically, environmentally and agronomically as well.”

The manure, sourced from a local dairy farm, was applied before planting in fall of 2019 at the first research site, followed by commercial fertilizer as needed to meet each crop’s nitrogen, phosphorus and potassium needs. Only fertilizer will be used for the remainder of the project at that site. The second site had manure applied at similar rates in fall 2020.

Since sugarbeet benefits from high nitrogen content in soil early in the growing season, but manure releases nutrients over time as soil warms, researchers were keen to see how the crop would respond to the various treatments.

“Sugarbeets are very sensitive to excess nitrogen in the soil late in the growing season. It actually will decrease the quality of the sugar if you have a lot of extra nitrogen hanging around in the soil,” Wilson explains.

Progress so far
One year into the project, sugarbeet crops which received liquid manure saw comparable – and in some cases better – yields and sugar content when compared to the fertilizer-only plot, suggesting a role for liquid manure in sugarbeet production.

“After this first year, things are looking pretty good,” Wilson says, noting more testing in different weather conditions is needed to get a more dependable picture.

“The good news is we’re learning so far that [liquid manure] didn’t reduce yields for the sugarbeet to a great extent, which is what we were hoping to see,” she says. “In fact, it seemed to increase the actual tonnage of the sugarbeet, but it did decrease the quality of the sugar a little bit. We have to see how that fits into each of the sugarbeet cooperatives’ economics, but overall it didn’t do as much damage as we were expecting.”

These early returns are promising, she says. If indeed farmers can replace some commercial fertilizer with cheaper liquid manure without sacrificing crop yields, which ultimately helps their bottom lines. Wilson says fields that haven’t had manure in recent years could also see a bump in soil health if manure is applied correctly and in the right volume.

Researchers seek to determine when in the rotation manure should be added to best ensure a productive soil nutrient balance.

“Sugarbeet farmers do have the opportunity to put this in front of sugarbeet. But we’d like to get a couple more years of experience under our belt to see where it will really be maximized – whether it’s in front of corn, soybean or the sugarbeet,” Wilson says.

So far, it’s looking like soybean isn’t the best contender to add manure into the rotation, since adding liquid manure at the start of the growing cycle left plants yellow and stunted. That compared to corn and sugarbeet plants that were larger in the plots that received manure in the fall, versus the fertilizer-only plots.

“We think we were seeing some issues with iron chlorosis deficiency in the soybean plots,” Wilson says. “Now that we know that’s an issue, we hope to change some management practices to reduce problems in the future.”

Researchers took soil samples in the middle of the growing season and again after harvest, but COVID restrictions at the lab mean they are still waiting to do the analysis.

Melissa Wilson says some of the fields saw a bump in soil health from manure.

Wilson has turned to a system called ArcGIS StoryMaps to share her findings.

Beet sugar represents more than half of all sugar produced in the U.S.

By the numbers
Sugarbeets were topped and harvested in late September. Sugar extracted from the plot that only received fertilizer was 91.2 percent pure, while crops that received manure and fertilizer had 90.8 percent sugar purity.

In terms of volume, the sugar yield from the fertilizer-only plot was 9,710 pounds per acre, which jumped to 10,380 for the low-rate manure plot and 10,266 for the high-rate plot.

These figures are of great interest to the Sugarbeet Research and Education Board of Minnesota and North Dakota, which is funding the research because members are keen to learn how best to use dairy manure in their operations, and how the technology behind liquid-solid separation could be used by large-scale dairy farms coming into the region.

Beet sugar represents 55 to 60 percent of all sugar produced in the United States, while Minnesota alone accounted for roughly a third of the 34,751 tons of sugarbeets grown in 2019-20, according to the Department of Agriculture.

At that scale, lowering input costs by incorporating liquid manure into the fertilization mix can have a major impact on farmers’ return on investment. Liquid-solid separation technology can further help the bottom line by reducing the volume of manure needed to fertilize the crop.

The concept of liquid-solid separation – or squeezing manure to yield two separate agricultural products – is decades old, but Wilson says the technology can now be scaled up for use on large-scale dairy farms with as many as 9,000 head of cattle. Liquid manure is applied to the fields to supply crop nutrients, while the dry solid manure becomes bedding for the cows – another cost savings for farmers.

“It’s an old technology that’s gotten a new life to it,” says Wilson. “People have been looking at liquid-solid separation for a while, but this is the first time I’ve been seeing it go into some large operations commercially.”

New storytelling styles
As an extension specialist, Wilson’s work doesn’t end in the field. But with the pandemic limiting opportunities for in-person education, she turned to a system called ArcGIS StoryMaps to share her research with farmers and other industry stakeholders.

“I was looking for opportunities to visually demonstrate what we’re doing” beyond the usual fact sheets and project descriptions, she explains. “I think it’s really important to get the information out there to the people who need it.”

Her presentation for the soybean rotation project uses visuals to take viewers through the experiment and give them a sense of what the plots, processes and equipment look like.

“So far it’s been pretty successful,” Wilson says of the online presentation, which quickly amassed hundreds of views and prompted one sugarbeet farmer to contact her with questions.

StoryMaps gives Wilson – who has a PhD in water resources science and soil science, and has been at the University of Minnesota since 2017 – another way to share her enthusiasm for the ins and outs of manure management.

“I think it’s really exciting,” she says. “With fertilizers, you kind of know what you get. But with manure, it’s kind of a puzzle. Figuring out how to optimize it is interesting for me. I like doing research and I like trying to answer questions that farmers have.” •