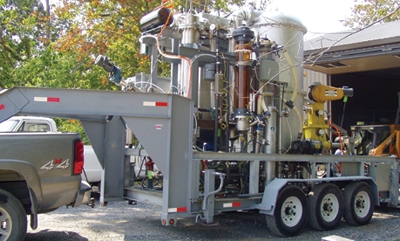 Once Virginia Tech announced that it had developed transportable technology to convert poultry litter to bio-oil and biochar, its phone started ringing off the hook from all over the world. Contributed photo

Because the United States is the world’s largest producer and exporter of poultry meat and second largest egg producer, there can be little doubt that managing poultry litter is no yolk.

However, Virginia Polytechnic and State University is working with a company called BioEnergy Planet Inc. to commercialize a pyrolysis litter disposal method. The disposal method not only has the potential to give poultry and egg producers a way to safely dispose of millions of tons of poultry litter produced annually, but the process produces two value-added commercial products – bio-oil and biochar. The bio-oil can be used as fuel to heat farm operations or reprocessed into polymeric material such as substitutes for petroleum-based plastics. The biochar works well as a soil fertilizer because of its high carbon, potassium, phosphorus and calcium content.

BioEnergy Planet Inc. chief executive officer Luda Kopeikina says the company was looking for a business opportunity that would convert a feedstock like poultry litter, into useful products.

After investigating various technologies, they settled on pyrolysis, and recognized the potential of the Virginia Tech system because not only did it dispose of the poultry litter, it also generated products that could be sold in commodity markets.

“Pyrolysis reactors can be small and the nature of the industry is such that those farms are usually small and independently owned,” says Kopeikina. “So to make it economical and for it to make business sense, we needed to have scaleable processing capacity that could potentially be moved.”

The company’s intention is to negotiate litter supply agreements under strict quality control parameters with poultry farms and operate the pyrolysis units themselves, marketing the bio-oil and biochar byproducts. Kopeikina says that no further refining of the bio-oil is required. It is useable in the state it is produced, except for the addition of a stabilizer like methanol. It can also be mixed with traditional, petroleum-based oil.

In terms of the equipment itself, BioEnergy Planet will conduct further engineering on the pyrolysis technology essentially to build more robust units based on the prototype developed by the university. The units will be built to scale according to the needs of farmers within a defined radius and located in a centralized location to keep transportation costs reasonable.

Virginia Tech research scientist Dr. Foster Agblevor was already actively engaged in developing pyrolysis technology related to producing bio-oil from hardwood residues when he was approached by a group of poultry producers from Virginia’s Shenandoah Valley to see if his method was viable for disposal of poultry litter. Various types of biomass, including wood fibre, are commonly used as litter ingredients in the poultry and egg industry. The poultry producers were looking for an alternative method for litter disposal to land spreading. Because of the volume being produced, the cost of transporting it further and further away for land spreading was becoming quite costly. The area produces about 453,000 tons of poultry litter per year.

Dr. Agblevor indicated to the farmers that he was interested in pursuing a more permanent solution to their problem.

“When I analyzed the poultry litter and saw the composition, it just struck me that with a little tweak, we should be able to do the same thing as we were doing with the wood residues,” says Dr. Agblevor.

Test results couldn’t have been better as researchers discovered that the higher protein content in the poultry litter actually resulted in higher energy bio-oil.

A lab-scale pyrolysis unit was constructed for use at the university and a larger, transportable unit was constructed and operated on a farm managed by Oren and Cheryl Heatwhole, in Dayton, Va., with financial support provided by the Farm Pilot Project Coordination organization.

Oren Heatwhole has been producing poultry since 1986, and is currently raising about 38,000 broilers annually for Tyson Foods.

“The litter could not be spread on area fields because the phosphorus content in the soil was already high,” says Heatwhole. “The reason for the pyrolysis was to take the liability and turn it into an asset.”

The poultry litter tested from the Heatwhole farm as well as litter supplied by surrounding farms produced a viscous brown bio-crude with a pH of about 6 when pyrolyzed at between 450 and 550 C.

Dr. Agblevor says that the pyrolysis concept developed at the university has been proven in other test laboratories, and once the university announced the breakthrough, they began receiving phone calls from around the world, asking the university to build pyrolysis units for them.

“Once everything is running and going as planned, it’s basically a homerun because everything you make from the litter, you make into a value-added product,” he says. “Also, we no longer have a litter disposal problem and there are basically zero emissions.”

While there were no design changes to the pyrolysis unit to adapt to the poultry litter, the material itself is quite difficult to handle because of its moisture content and odor. To deal with the odor issue, Dr. Agblevor says they invented a product called Amosoak, which absorbs the ammonia in the poultry litter and alleviates the odor problem. It also makes the litter easier to feed into the pyrolysis unit. The Amosoak is typically applied on the farm in the litter house prior to delivery to the pyrolysis site.

In future, Dr. Agblevor says consistency of litter supply in terms of the type, quality and quantity of the litter material, and how often the litter is removed, will be critical to the performance of the pyrolysis process. It will be purchased based on its energy content.

Although it may appear that the Shenandoah Valley producers are dealing with a high quantity of poultry litter, Dr. Agblevor says a smaller transportable pyrolysis unit will likely serve their purposes. However, much larger units would be the choice for poultry and egg producers on the Maryland eastern shore, where those producers have to dispose of over one million tons per year.

Heatwhole says that as a condition to his participation in the project, he will take ownership of the test pyrolysis unit. However, he hopes that over the medium term, a larger, commercial unit will be installed in the area that would be capable of disposing of between 10 and 20 tons of litter per day, which would accommodate the needs of about 30 area poultry operations.

BioEnergy Planet’s initial commercial foray will likely be in Virginia. Then they intend to expand to other areas of high poultry production in the United States.

At present, Kopeikina’s focus is not so much serving the market, but arranging the financing and attracting passionate investors to help develop the business. The company also has a number of grant applications pending.