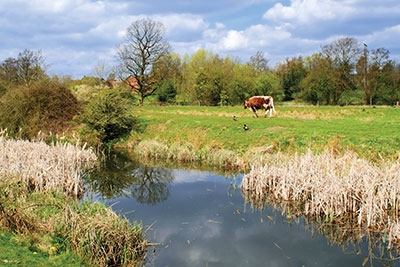 A multi-pronged, systems approach to solving water pollution caused by nutrients in the environment is the focus of a new center housed in Penn State’s College of Agricultural Sciences.

With a $2.2 million Science to Achieve Results grant from the U.S. Environmental Protection Agency (EPA), researchers will launch the Center for Integrated Multi-scale Nutrient Pollution Solutions. The center is one of four new National Centers for Innovative and Sustainable Water Research announced by the EPA Jan. 30.

The Penn State-led center – known by its short title, the Center for Nutrient Solutions – will encompass seven teams that will combine existing research efforts with new studies and programs to tackle the vexing problem of nutrient pollution and its effects on watersheds, particularly the Chesapeake Bay basin.

Nonpoint source nutrient losses – primarily nitrogen and phosphorus – from agriculture and other land uses cause significant water pollution in many regions of the country, including the Susquehanna-Chesapeake watershed, which is home to more than 17 million people. Population growth and resource development are placing increased demands on the region’s water resources and aquatic ecosystems.

“Previous research has led to the implementation of best management practices that have helped to reduce nutrient runoff into streams and rivers,” said Shortle. “But BMP selection and location are important factors determining effectiveness. We need more science to be sure we select the right practices that can be implemented in the right places in a cost-effective manner.”

Shortle pointed out, however, that best management practices by themselves might not do enough in light of larger, systemic challenges.

“One of our major goals is to determine how far enterprise-level best management practices can go in solving problems and when we instead must begin to strategically address system-wide mass-balance issues.”

He explained that much farm-related nutrient pollution in Pennsylvania results from the importation of nutrients, mostly Midwestern corn and other livestock feed ingredients, leading to an imbalance in the environment. An estimated 30 percent of these nutrients pass through undigested in manure and end up in bodies of water via runoff or atmospheric deposition.

Excess nitrogen and phosphorus in the Chesapeake Bay, much of which comes from the Susquehanna River and its tributaries, are blamed for algal blooms and related “dead zones” where many aquatic species can’t survive due to a lack of oxygen. State and federal governments for decades have pursued policy options and voluntary measures aimed at restoring water quality in the bay – the nation’s largest freshwater estuary – with mixed success.

The new Center for Nutrient Solutions will focus on four Chesapeake Bay tributary watersheds: Conewago Creek, Mahantango Creek and Spring Creek in Pennsylvania and the Manokin River in Maryland. Efforts in the Conewago Creek watershed will build on an existing Penn State Extension initiative – featured in a recently released video – that already has achieved measurable results.

“Our team will use a ‘shared discovery’ approach that will engage researchers with community partners to identify the drivers that control nutrient inputs and outputs within a study area and apply the best watershed science to develop a realistic and scalable set of interventions,” Shortle said. “The objective is to provide advanced decision-support tools that will help farmers, government planners, land and water managers, water quality agencies and others to achieve societal, economic and ecological benefits from nutrient pollution reductions.”

Shortle maintained that decisions about agricultural nutrients must be made in the context of their relative contribution compared to the overall food production and consumption system, storm water runoff from other land uses, wastewater treatment and atmospheric deposition. And he acknowledged that any solutions will require trade-offs.