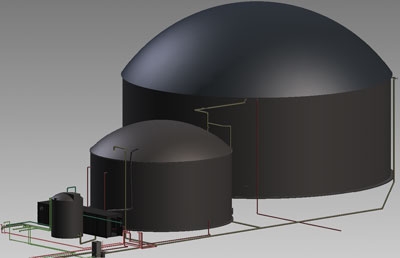 A conceptual drawing of what the 500-kilowatt anaerobic digester – planned for installation this spring at Michigan State University – will look like. The digester will stand about 30 feet tall with a membrane roof and hold 450,000 gallons of material. The manure and food waste entering the tank will be digested for approximately 25 days. Wieland-Davco/C2AE

“All of the livestock farms are situated immediately adjacent to the teaching campus,” says ADREC manager Dana Kirk. “That allows us unique opportunities.”

One opportunity has been to combine campus food waste and manure from the dairy cows to create energy for the university using an anaerobic digester. An experimental 250,000-gallon plug flow digester has been running for 18 months with success. This summer, a larger anaerobic digester will be installed by Anaergia Inc. that will create 500 kilowatts of renewable energy for use in buildings across the campus.

Research
The project has been in the works for the past six years. It began when the university started looking for ways to divert the food waste generated at the 12 campus cafeterias from being disposed of in landfills. The food waste study evolved into a look at all-organic waste, and it was determined the university produced approximately 21,000 tons per year of organic waste from both the campus facilities and its farms.

“That led us to the development of an anaerobic digestion system to utilize a portion of the waste,” says Kirk. “We looked at the material we had easy access to and wouldn’t cost a lot to transport.”

Using an anaerobic digester to process these materials made sense for a number of reasons:

Searching for the technology
ADREC looked at many different technology providers and different systems in the U.S. and Europe but settled on a complete mix system.

“The selection of the proprietor was based on the best overall value,” says Kirk. “We looked at cost and factored in the experience and the referenced projects. We also looked at other unique aspects that it might bring to the table, and the flexibility of the technology.”

In October 2012, the Anaergia Inc. was chosen. Bernie Sheff, vice president of Anaergia, was excited not just because his company was selected, but also because he is a Michigan State alumni and proud of the university’s desire to improve overall sustainability and transition away from traditional fossil fuels to renewable fuels.

The tanks are already on site and the engines are being shipped. When the weather improves this spring, Anaergia will move ahead on construction in order to have the digester online in July.

Once complete, the 500-kilowatt system should be the largest of its kind on a college campus in the United States.

“It will be the largest in volume and in energy output,” says Kirk.

Getting the materials to the technology
One of the first challenges in designing the layout was to determine how materials would be transported to the digester.

“Trying to figure the best way to move the three combinations of dairy manure was a bit of a challenge,” says Kirk. “We covered over the slats and are going to a pump system on the slatted material. The gutter cleaner material was already being moved with a tractor and spreader to our compost facility and will now go an extra couple hundred feet to the digester.”

Local utility issues
Another hurdle was trying to work with the utility company to determine an equitable way to use the energy and maximize its use on campus. Energy will be generated at the anaerobic digester location and will be wheeled through the local distribution grid to the main campus.

A bird’s-eye view
If you drive by the facility in July when it’s up and running, you will find a fairly small footprint. First is a receiving area, which can receive both solid and liquid waste from large tankers.

“It’s a pretty simple two-pit system,” says Sheff. “We bring in our food and grease waste on one side, and bring in manures on the other. We use a chopper pump to chop the material up and emulsify it. When it’s a good slurry, we pump everything up into a 10,000-gallon mix tank. That mix tank acts a like an acidification tank. It has about a day’s detention.

We bring it to temperature and then we pump it forward up into the digester.”

The digester will stand about 30 feet tall with a membrane roof and hold 450,000 gallons of material. The manure and food waste entering the tank will be digested for approximately 25 days.

After the material has made its way through the digester, the solids will be separated and moved to the university’s compost system. The liquids will move on to a 2.1-million-gallon storage tank directly behind the digester.

“The above-ground storage tank is 100 feet in diameter and stands about 36 feet tall,” says Kirk. “It will have a membrane roof and we will be able to pull additional gas off the effluent storage.

Sheff says the storage tank will work much like the European model.

“In Europe, especially in Germany, effluent is held in storage tanks with 270 to 320 days of capacity. This further increases the energy recovered by the system as additional biogas is captured during this time frame.

The liquids will be later used to fertilize the campus farm, while the compost will be used on campus or sold to the public and wholesalers either in bagged or pelletized form to generate additional revenues.

In addition to generating renewable energy, reducing greenhouse gases and diverting waste from landfills, the facility will also reduce odors released by the dairy farm.

“Not only is the dairy near the main campus, we also have three golf courses surrounding this area,” says Kirk. “Odor control and good manure management practices are critical with this project and a driver behind it. Also the liquid manure will have fewer weed seeds and require less use of herbicides.”

Phase 2
Over time, the university would like to further expand the project. There is access to more organic material internally and the campus also has access to bio solids and other residuals near the community.

“If this experience turns out well, the goal is to double the capacity of feedstock and double the energy output,” says Kirk.

The project is expected to pay for itself and generate long-term financial benefits through energy production and tipping fee revenues.

“The vice president and the president of the university both wanted us to create a project that had a positive cash flow or a payback period that was reasonable. Being a land grant university, we want to demonstrate technologies that are appropriate and also financially viable for our state builders,” says Kirk.

Future partnerships
Sheff and Kirk are both excited by what this could mean for innovative urban and dairy partnerships in the future.
“Anaerobically digesting food waste and manure in one fully integrated system creates a robust and cost-effective solution. The dairy provides wonderful buffering and bacteria on a daily basis while the cafeterias provide substrates with high energy content that would otherwise be disposed of in a landfill,” says Sheff. “The net result is a more financially viable solution that reduces energy costs for the university while improving environmental sustainability. ”

“Without the cows or the dairy, it would be a lot harder thing to look at because the manure improves the economies of scale for the project,” says Kirk. “Hopefully this can be a model for the small farmer interested in a digester and renewable energy, how they could partner with a local municipality or an urban center and kind of create a partnership where they are bringing feedstock on and generating enough power that the municipality can work with them.”