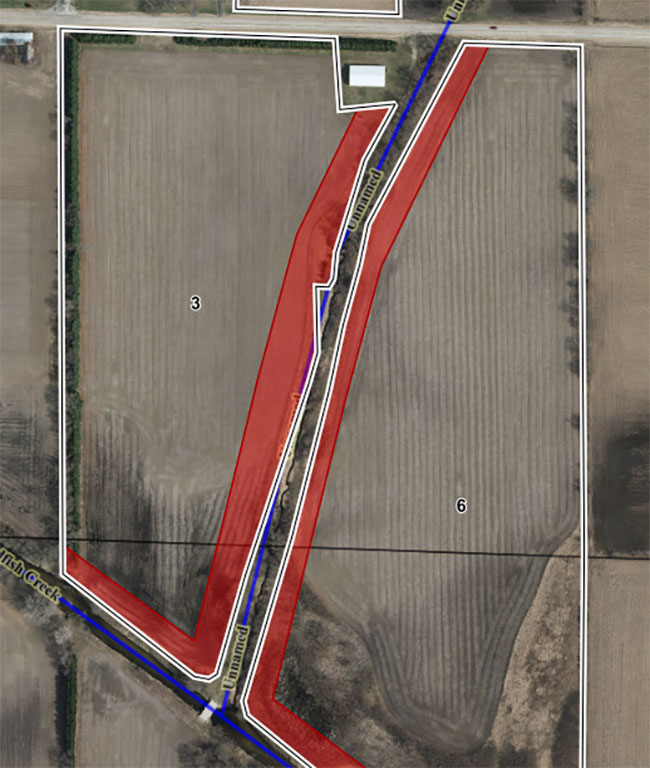 The illustration shows, in red, the areas in fields where manure can’t be spread because they are adjacent to the stream. Photo courtesy of Laura Ward Good.

Wisconsin’s dairy farmers have come a long way in addressing the state’s water quality problem. Nutrient management plans are required for all farms, and permitted farms or confined animal feeding operations (CAFOs) are more heavily regulated than other farms, with guidelines around the use of waste storage structures and manure application under the U.S. Environmental Protection Agency’s (EPA) Clean Water Act.

Any animal feeding operation with 1,000 animal units or more is considered a CAFO, but smaller-scale farms can also be considered CAFOs if they have pollutant discharges to nearby wells or waterways.

To create these plans, in-state farmers use the Soil Nutrient Application Planner (SnapPlus) software linked with SnapMaps. Developed by the University of Wisconsin-Madison, the system uses geographic information system (GIS) mapping to show areas with manure-spreading restrictions. Zones with higher risk of surface or groundwater contamination include areas near streams and rivers or surrounding municipal wells, and areas with Karst bedrock – landscapes where rock can be fractured near the soil surface, providing a direct conduit for surface runoff to reach groundwater.

According to University of Wisconsin-Madison soil scientist Laura Ward Good, the software allows farmers to import field boundaries and find these restrictions. On permitted farms there must be buffers around flow channels; there are also soil-based restrictions – meaning if the field is on a shallow water table, manure can’t be spread there.

“Part of nutrient management planning involves making maps of your fields, and these include the soils and the slope and different field features where there are restrictions on applying manure,” she says.

Making the maps is one thing, but abiding by them is another. Good says that, once in the field, it’s very difficult to find boundaries unless farmers physically plant flags marking them. “Most farmers and applicators don’t have the technology to allow them to know where the boundaries are in the field,” Good says. “As you can imagine, this can be challenging.”

To address this need, Good and her University of Wisconsin-Madison colleagues John Panuska and James Beaudoin are developing an app capable of showing high-risk areas on a mobile device. The project began in early 2020 and aims to deliver a beta version ready for testing by late summer to fall of 2021, with a final platform ready for general field use by 2022.

The new project is funded by the Dairy Innovation Hub, a multi-million dollar state-funded initiative aimed at protecting land and water resources and strengthening the industry in Wisconsin.

Field application
Panuska is a distinguished faculty associate in the department of biological systems engineering who works in agricultural and natural resources extension.

Demand for a more practical field-based tool has been growing in the state, he says. Some applicators are resorting to bringing printed maps into the field.

“Custom applicators especially, and producers as well, are frustrated when they get out in the field with a map and they’re trying to figure out where the boundary areas are. If they get it wrong, they risk county conservation or DNR (Department of Natural Resources) staff coming out and potentially getting a fine. They want to do the right thing and they need a tool to help,” he says.

Beaudoin, a GIS developer in UW-Madison’s department of soil science, works on SnapPlus and SnapMaps. He says he joined the department five years ago when there was no geographical interface for SnapPlus to let people see restrictions in their fields and plan around them. He built that interface for the department; his challenge now is bringing that information into an app with a smooth user interface.

Good says Wisconsin farmers submitted more than 8,399 farm nutrient management plans to the Department of Agriculture, Trade and Consumer Protection in 2019, and many of those farms handle manure – meaning a large proportion of those planners use SnapPlus. But she adds that the person making the management plan isn’t always the person spreading manure, so any tools that can help keep track of application and aid communication between planners and custom applicators are valuable.

Panuska says the goal of all these tools is for as many producers to use them as possible. “A lot of people create nutrient management plans, but how many follow them?” he asks. “We’re hoping the new app will encourage or raise the interest of folks using SnapPlus to use the app and follow their plans.”

The team hopes as many producers as possible will sign on to use the beta version of the app in 2021. “The more people try it, the more feedback we get,” Beaudoin says.

Panuska adds that the team hopes to build a small test group for an alpha version of the app to get early immediate feedback before releasing the beta version.

Manure Tracker
Currently, a very simple manure tracking app does exist; created by a different team with the University of Wisconsin’s Nutrient and Pest Management Program, Manure Tracker allows producers to count and record manure applications on a field-by-field basis. The app records spreader capacity, manure source and application method in its basic form; an advanced feature allows producers to add data on soil condition, temperature and precipitation at the time of application, as well as the driver’s name. The app helps farmers avoid applying manure twice on the same tracts of land – a significant step toward mitigating potential runoff issues.