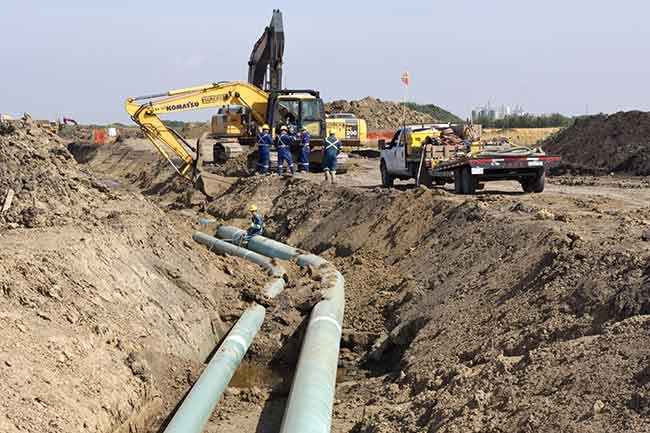 An environmental assessment and public inquiry would be essential before transportation of manure by pipeline would ever be approved. However, this transportation method is feasible. Photo by Tony Kryzanowski.

Is it feasible and economical to transport liquid manure by pipeline from areas where there is a surplus of phosphorus on the land base to areas where phosphorus is deficient?

As hog and dairy farms become larger and larger and as phosphorus builds up on land surrounding some of these operations, the pipeline option for transporting liquid manure might not sound so farfetched under the right circumstances.

The technical and economic viability of transporting liquid manure by pipeline was a question posed recently by the Manitoba Livestock Manure Management Initiative (MLMMI) Board as part of its ongoing efforts to provide responsible nutrient management options to the province’s agriculture sector. Pork production is the largest livestock sector in the province, and according to the Manitoba Pork Council, about 50 percent of production is concentrated in two rural municipalities in southeast Manitoba in the area around Steinbach. MLMMI estimates that pork producers in the Steinbach area generate between 50 and 70 million gallons of liquid manure per year.

MLMMI began its study into nutrient management options by investigating five different manure separation technologies where the phosphorus could be removed in dry form from the liquid manure. These were the incline screen, rotary press, centrifuge, reverse osmosis and air flotation and belt filter press methods. Manure in liquid form adds as much as 95 percent to the weight of a load.

“While it appears that some of them work, they are expensive,” says John Carney, executive director of MLMMI. “So we’ve broaden our search because since these are expensive both from a capital and operating point of view, we asked what other options do we have? Certainly an option is trucking but then also the idea of using a pipeline possibly to relocate these nutrients came up.”

He adds that the pipeline option has been discussed in Manitoba from time to time because of the advantages it offers versus truck transport, those being reduced transport cost per gallon, less traffic on roadways resulting in less wear and tear on infrastructure, and a pipeline’s ability to potentially transport manure faster from one place to another. On the flip side, pipelines are expensive to build and they typically require an exhaustive approval process.

MLMMI commissioned DGH Engineering to assess the physical, economic and environmental feasibility of a pipeline to transport liquid manure. They discovered in their preliminary study that there aren’t many examples of high volumes of manure being transported by pipeline, with most located in Europe. So they opted for a concept design of a hypothetical 56 kilometer, 14-inch pipeline capable of pumping 60 million gallons per year.

They concluded that construction of a pipeline was feasible and if purchased outright, the cost would be about $42 million, with operating costs of $.02 per gallon. Another option would be to take a mortgage out to finance the project. Over 25 years, the cost per gallon to ship the manure through the pipeline would be about $.07 per gallon. However, there were a number of logistical hurdles that such a project would have to overcome, such as the need to successfully pass the scrutiny of an environmental assessment and coordinating both the farmers that would supply the manure and farmers that would receive manure from the pipeline.

While the feasibility study provides both the province and the industry with important data on the potential use of a pipeline to transport liquid manure, Mike Teillet, Manager of Sustainable Development at the Manitoba Pork Council says what Manitoba producers have concluded from the study is that moving liquid manure in this manner is not economically viable for them. With that hard data in hand, he says that producers are looking at other options such as simply trucking the liquid manure to areas where the land is phosphorus deficient.

“The pipeline option is probably too expensive,” says Teillet. “I would think that it is highly unlikely that it will go forward.”

However, he indicated that there is a sense of urgency to find phosphorus reduction or liquid manure transport options among hog producers in the Steinbach area because this issue of phosphorus build up is limiting industry growth.

“We have been negotiating with them to come up with a solution that both parties can accept, and we did reach an agreement in April, where they have agreed to allow us to build more barns under certain restrictions,” says Teillet, but not in the areas where the industry is currently highly concentrated.

Feasability
Given the current financial stresses on the industry, Carney agrees that it is unlikely that contractors will be breaking ground on a manure pipeline in Manitoba any time soon. However, it was part of an overall investigation into manure separation, handling and storage, and transportation options they’d like pork producers in surplus phosphorus areas to consider.

Carney also agrees with Teillet that the concern about build up of phosphorus on the land base surrounding hog farms in the Steinbach area is having a constraining impact on growth.

“There are areas in the province where there is more than sufficient land to increase livestock production,” says Carney, “but not realistically in the two southeast municipalities.”

He says in addition to reviewing various manure transport options, MLMMI has also looked at ways that Manitoba hog producers could potentially either reduce the amount of phosphorus they were generating with a specific focus on their feed and also if there were crops that could be grown that require more phosphorus.

“We concluded that in the southeast, neither of those would bring that region into balance,” says Carney, “so we knew we’d have to find the most economical, practical way to relocate the phosphorus.”

As to the value of the pipeline study, Carney says the reason MLMMI made that investment was to put some actual numbers to the cost of a pipeline and to determine whether or not it was feasible, the most pertinent finding being that building a pipeline based on DGH Engineering’s concept is expensive. That’s where the issue stands at the present time in Manitoba.