With the urban-rural divide narrowing, there are opportunities for education. 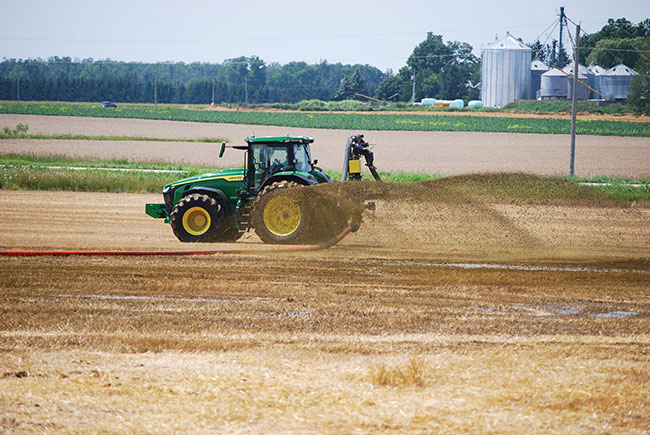 Solid and liquid spreading takes place on a farm near Listowel, Ont. during an equipment demonstration in 2021. PHOTOS COURTESY OF MICHELLE ALLISON.

It’s no secret that the divide between urban and rural living has narrowed in recent years.

As more and more homeowners look to escape the big city and put down roots in a more bucolic setting, the number of new homes being built in rural communities has skyrocketed. As a result, the buffer that once separated individual family dwellings from farm operations has shrunk considerably. This increasing closeness has impacted many aspects of farm operations, probably none more so than the application and storage of manure.

“Oh, absolutely,” says James Dyck, an engineering specialist for crop systems and the environment for the Ontario Ministry of Agriculture, Food and Rural Affairs (OMAFRA), when asked if rural communities were experiencing an influx of new residents.

“I’m located in an area in Niagara [Ontario] where we’re close to the Greater Toronto Area, and even before COVID there seemed to be an exodus from the GTA. We’ve seen real estate prices climb a lot in the surrounding municipalities. As a result, there’s now a lot of different places where rural and urban areas interface and that can potentially cause some issues.”

Dyck says the odor from manure has traditionally been one of the top issues his department has had to deal with, and it continues to field a significant number of complaints from the general public as urban expansion continues in many areas of southern Ontario.

The ministry’s basic goal in those kinds of situations, he explains, is to help farmers understand and follow appropriate practices. In cases where there may be room for improvement, the ministry can recommend remedial steps to address the issue.

One of the steps Ontario has taken to address complaints about odor from livestock facilities is to develop a land use planning tool known as the Minimum Distance Separation (MDS) formula. When a farmer builds a new livestock barn or renovates an existing one, they must first perform a calculation, which basically determines how far out that barn must be from the nearest home. Conversely, anyone who wants to build a house near a livestock farm must do a similar calculation.

“The idea behind that is to try and manage some of these issues preventatively by saying if we put a house so far away at least if there is an odor or nuisance, it will be a little more diluted and maybe not quite as concentrated,” he explains.

Doug Johnston and his brother Dave co-own Maplevue Farms, a grain and dairy farm near the town of Listowel, Ont. The farm is home to about 150 milking cows and a four-year-old robotic milking barn. Listowel is the largest town in Ontario’s Perth County and, with a current population of just under 10,000, represents almost two-thirds of Perth County’s 15,538. Listowel’s population shot up by 26.7 percent between 2016 and 2021. Perth County is about a 45-minute drive away from cities like Guelph and the fast-growing Waterloo Region.

While the nearest homes are still located some distance away from their farm, Johnston says the family-owned operation tries to be a good neighbor by keeping nearby homeowners informed about their activities, especially when it comes to spreading manure on their fields.

“We talk to the neighbors about what we’re doing and likewise they let us know when they’re having a family gathering or if there’s a wedding so we can try not to haul any manure that day,” he says.

“I think it’s very important to keep the lines of communication as open as we can. Ten days ago we were going to put a bunch of steer and pig manure on a section of the farm. I called the guy we rent the land from and said this is the weekend we’re going to be [applying it]. He said ‘thank you’ and then he went away for the weekend.”

It’s a similar situation south of the border, where urban development continues to grow in rural areas of the U.S. that are home to a large number of farm operations.

In Ohio, for example, hundreds of new homes are built each year in counties that are home to large livestock farms. While some of those counties have strict regulations on how close homes can be located to farm, others have virtually no restrictions, which can sometimes lead to tensions between farmers and transplanted urbanites, says Glen Arnold, a field specialist in manure nutrient management with Ohio State University Extension.

One of the biggest sources of that tension, according to Arnold, is the changing nature of livestock farming. As operations have grown in size, so too have the barns required to house pigs and cattle. A typical pig barn can now house as many as 1,500 swine while a dairy farm can have upwards of 2,000 head of cattle. More animals means more manure which can sometimes mean more odor.

Arnold says one of the best things farmers can do to diffuse some of those tensions is to get to know their neighbors and share information with them about what’s happening on their farm. The better you know someone, he explains, the less likely they are to become annoyed with what you are doing. Likewise, people moving to a rural area for the first time need to better understand how important farms are to the communities they are a part of, he adds.

“Many times people think that can all be done in some other state rather than here locally in my backyard. But livestock is a large economic powerhouse for most rural areas. There’s a lot of trickle down.”

As important as relationship building and understanding is to easing these tensions, there are some concrete steps farmers can take in the field to reduce complaints about manure spreading and storage.

Arnold says one of the most important things producers can do to lessen the smell from manure is to incorporate it into the soil in as timely a manner as possible. Leaving manure on the surface of a field means the can carry much farther if the wind blows in a certain direction or if a rain remoistens it, he adds.

He also advises farmers to stack manure inside or at least in an outdoor location where it’s not visible to passersby.

“Most of us smell with our eyes as much as our nose. If it looks bad, it’s a lot easier to become offended by something,” he says.

Dyck agrees that it’s important for farmers to talk with their neighbors about their operations, especially when it comes to the application or storage of manure. That kind of dialogue can help reduce any uncertainty or frustration neighbors could be feeling, he adds.

Farmers may also want to take a closer look at some of the latest technology available for fertilizer application, he explains. For example, a growing number of farmers have switched to using drag lines or injection-type spreaders. By injecting manure directly into the soil, farmers can reduce the potential for nutrient loss and also cut down on odor, Dyck adds.

Johnston says something that has helped reduce the odor associated with manure on his farm is planting cover crops in its wheat fields. Not only do these crops help capture the nutrients from the manure, but they also trap much of its odor, he explains. Johnston also recommends farmers spread manure in different areas each year rather than “pounding” it into the same field year after year.

Johnston and his family are currently working to develop a digital platform that will track exactly how much manure they apply to each acre of field. They hope to be able to share that information with neighbors once the system is operational.

“People have to understand that manure is not waste, it’s a nutrient. We treat it as special. It’s valuable to us. It’s not something you want to just get rid of. It has to be spread precisely and tracked,” he explains.

Dyck says an important part of bridging the gap between urban and farm communities is continued education.

“Rural Ontario is not just empty countryside where people just happen to live. It’s also a place of business and the business of farming involves a lot of machinery and livestock. There can be noise, there can be odors,” he says. •