TerraNu fertilizers start out as dairy manure and are transformed into a precision nutrient delivery system. 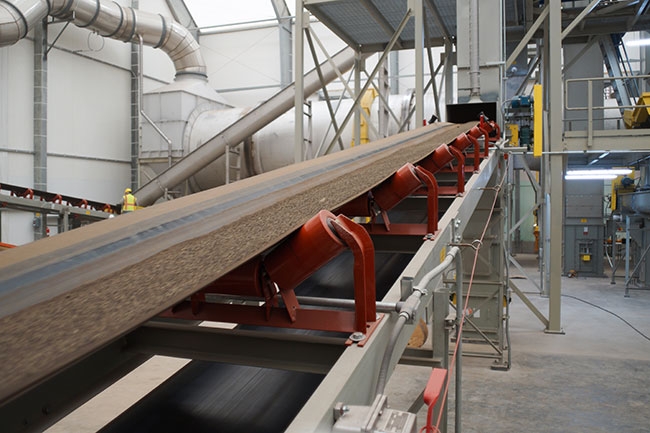 The granulated product is conveyed through various processes in the facility, including a cooling system. Contributed photo

For years, Fair Oaks, Ind.-based Prairie’s Edge Dairy Farms, LLC, had been trying to find the right technology to remove phosphorus from its manure. Little did Carl Ramsey, farm manager, know that search would lead to a new manure-based fertilizer.

“In the process of finding the right technology, we identified and later purchased from Trident Processes, a phosphorus separation system,” says Ramsey.

The highly-automated Trident system processes the material leaving the farm’s anaerobic digester, separating the liquid from the solids and leaving a stackable, dense, high-concentrated, nutrient-laden cake.

“When Prairie’s Edge was talking to Trident Processes, Kerry Doyle mentioned he had a contact who wanted to take that nutrient cake one step further – Midwestern BioAg,” he adds.

That was good news because Prairie’s Edge is no small operation and the dairy would be dealing with a significant amount of nutrient cake.

Discussions began with Midwestern BioAg after the Trident system was installed.

“Midwestern BioAg was going to create a first-of-its-kind manure blending and granulating facility near the farm,” says Ramsey. “They would in turn take the manure cake and use it in their manufacturing process.”

Flash forward two years. Midwestern BioAg created the new blended fertilizer and built the facility. It was operational in April and began producing fertilizer by June. Prairie’s Edge currently has 18 and 20-ton trucks running around the clock delivering the cake to the new plant.

“We get a lot of benefits from the Trident system. One of the benefits is a cleaner liquid that can then be field applied with fewer nutrients in it,” says Ramsey. “And because the nutrient cake has been de-watered, we’re able to transport them more efficiently. Because in our world, pounds of nutrient per ton are what pays the bills.”

Midwestern BioAg is also pleased with the product coming from Prairie’s Edge and the new fertilizer. However, creating new fertilizers isn’t new to the company.

“It’s really a soil-centric approach,” says Dr. Tony Michaels, CEO of Midwestern BioAg. “We figure out how to manage all the different minerals that crops need, and how to build soil biology to help hold and cycle those nutrients. For 35 years, on more than one million acres, we’ve been helping farms manage these kinds of things to create the largest farm profits. Our current business is highly customized because every farm is different and every crop is different.”

Dr. Michaels says that about three years ago, someone in the Pacific Northwest approached Midwestern BioAg with digestate from an anaerobic digester and asked if they could make fertilizer from that. Midwestern BioAg’s owner, Gary Zimmer, saw the possibilities.

Working with companies like Trident – that knows how to take moisture from manure – and FEECO – that develops granulated equipment – Midwestern BioAg develops the manure-based products – TerraNu Nutrient Technology. Nutrients are infused into a manure-based granulation for precision, uniform application. And these fertilizers, being bound to manure, are easily pulled into the soli biology.

“We came up with a set of products, and we tested them out in the field, and they outperform our current way of doing things and they are more cost effective than what we’ve done,” says Dr. Michaels. “And they’re dramatically better than just the straight conventional fertilizers on their own.”

On June 15, 2017, Midwestern BioAg was able to commercially blend the manure with other dry granulated fertilizers to be professionally used in a traditional fertilizer facility.

The solids are brought to the 85,000-square foot facility – about a two-acre footprint.  The company runs about eight tons per hour and has the capacity of 65,000 tons annually with the potential to expand to 90,000 tons. And although it isn’t currently running 24/7, it is designed to.

The granulated product is conveyed through various processes in the facility, including a cooling system.

“What you see when you come into the plant are outdoor cake hoppers where we receive basically a semi load an hour of the manure solids,” says Dr. Michaels. “Then, inside the big building at the front end, you have 11 [computer controlled] bins that meter in all the different minerals or other things we want to add to the product. Those come together into a system in the middle room, which combines all those products, into a consistent product. Next, it goes through a series of steps to turn them into granules, and goes into this massive drum where they get dried. Then, it goes into a cooler to cool them back off. All the dust gets captured and brought back into the product, so we get full recycling. We shake [the granules] through screens to be exactly the right size for fertilizer, and the ones that are too big and too small get recirculated back into the system. Literally, it takes 20 minutes.”

The three new products include:

Midwestern BioAg was able to produce product in the spring that was applied to 25 farms, including Prairie’s Edge.

“A lot of the farms will take the Ignite or the MicroPack and they’ll put it on in the fall and then come in and just put nitrogen on when they plant, and it saves them a lot of time in the fall to put the mineral fertilizers on,” he adds. “Then, in the spring, they can put the nitrogen right on the plants, whether it’s a liquid or dry, or side dress afterwards. The whole point is to transform how they farm by changing a few practices as possible.”

It’s one thing to create a great product, but it’s another to sell it and Midwestern BioAg was concerned that it might be hard to explain the value of the manure-based product to farmers. They need not have worried.

“What surprised us was how farmers who aren’t dairy farmers romanticized manure,” says Dr. Michaels. “They remember when their grandparents had manure as a fertilizer and they know that they’ve reduced the organic matter in the soil, that all the chemical-intensive current way of farming isn’t good for the soil biology, and that soil biology is good for your farm. Based on input from all these farms, we market it as ‘All the benefits of manure without the hassle.’

“Because we blend all these trace minerals and secondary nutrients and other things in, and because we really want it to be a fully balanced way to feed the crop that then complements the normal NPK that they would have used for their basic nutrition program, farmers could connect to what they were getting,” he adds. “It’s dry and granulated, and you can put it in through your precision equipment and everything else.”

The precision nutrient delivery system has a number of benefits. It’s a sustainable, closed loop system. Crops are grown and consumed by livestock, manure is collected, digested and dewatered. It’s then blended, put back into the soil where it feed the crops again.

In addition, the granulated manure-based fertilizer allows dairy farmers a no-till farming option as previously manure often had to be knifed or injected into the soil. And it simplifies the management of manures because famers aren’t stuck with whatever fertility the manure on the farm contains.

Lastly, for farmers who are already using a digester, processing their manures, making renewable energy and/or running their trucks on biogas, this is another piece of the puzzle and can help them better manage their process and create more value out of a dairy operation.

“This is something both we and Trident came to independently, but it worked out perfectly,” says Dr. Michaels.

Ramsey says he can see more plants like this working with other farms in the future.

“With anything that has not really been done before, there’s a learning curve, and I think we’re actually a little farther ahead at this point than what a lot of people thought we would be. The technology is there and the desire is there. I believe that this is something that can be replicated throughout the country.”

There are also already discussions underway on how to do the same thing with raw manures and with other animal wastes.

“We think there will be iterations over time that will have other carbon sources,” says Dr. Michaels.

But that looks to be down the road.

Currently, Dr. Michaels says it’s all about making it easy for conventional farms to harness the power of soil biology to improve their crops and make their farms more profitable.

“This is a way to simplify that. We are creating the capacity for farms to get the benefits of manure and the benefits of balanced mineral nutrition delivered by soil biology, all in something that fits as simply as possible into the way they currently farm.