Texas-based research digs deep into the value of microbes in soil. 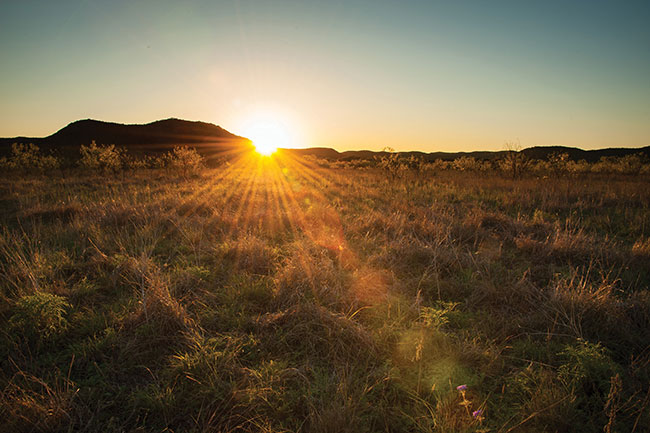 The soils in parts of Texas are semi-arid, so patience is key when dealing with compromised soils. Photo credit: © Lamar / Adobe Stock.

In farming, there are many examples of practices that have been used for centuries without much science-based understanding of why or how they are beneficial. In the realm of forage crops, composted manure has been applied to fields to deliver stronger, healthier and more vigorous plants, but there has been minimal mainstream awareness of the biological or chemical interactions that make it so.

It’s similar to the household microwave people use on a daily basis; most use it to heat their food without a clue as to how it works – they just know that it gets the job done. More importantly, the average person can’t take what the appliance does and adjust it to fit various situations.

Over the past century, science has begun to reveal some of the ways applying composted organic matter like manure is beneficial. For example, a recently published study from Texas Tech University explored manure application to better understand whether or not it increased soil microbial biomass and soil carbon to improve soil health relatively quickly. If so, this would allow farmers to apply the science to increase productivity in numerous field applications.

Lindsey Slaughter, soil microbial ecology/biochemistry assistant professor with the department of plant and soil science with the university, oversaw the thesis research of graduate student Rael Otuya, who wanted to explore the interaction between manure application and increased soil health. Samples of soil were taken from two semi-arid Texas forage fields in the summer of 2017 after the grasses on the site were into their growing season. The sampling, done twice a year, continued into the fall of 2018 to measure microbial abundance and the soil’s organic carbon and nitrogen after a single composted manure application.

“We have been interested in how permanent grasslands can increase soil microbial biomass and soil carbon in these soils that are usually pretty low in both due to the semi-arid climate and intense farming in this region,” she says. “We need a way to add more organic residues to the soil than would normally be there from growing plants to help build up microbes and soil carbon quickly.”

She adds that because the southern High Plains of Texas is a high cattle production region, there is an abundant volume of manure to supply the necessary extra carbon and organic residues. The study tested the one-time, low-rate application of composted manure to the established forage fields of either warm-season grass (a relatively new Old World Bluestem cultivar known as WW-B. Dahl) which was occasionally fertilized, or to a mix of the grass and alfalfa.

“The grass-only pastures needed nitrogen fertilizer every year, but the grass-legume mix did not,” she says. “We added composted cattle manure donated by a local operation to each pasture in March 2017.”

The only exclusion to the application of compost was a control patch of land 20 meters square covered with tarps.

Not surprisingly, the farming practices of the past were proven to improve soil health. Farmers of bygone times would have waited to see plant vigor to know the manure application was working, but here and now, science told the story beneath the soil. The composted manure applied during the study led to the desired benefits of increased levels of microbes and soil carbon, which are factors in soil health.

“Even if a farmer has no formal background in agricultural science, plant/soil science or ecology, they have understood for centuries that giving plant or animal waste back to the land is a rich source of nutrients that shouldn’t be wasted,” she says. “[They] have seen that it improves the quality of their soil and of the plants that grow then and in the future.”

However, what might not have been expected was that the desired results take time, at least in semi-arid Texas soils, so patience is key when dealing with compromised or challenging soils. It took about 18 months to see the positive outcomes. The field that received fertilizer made better use of the composted manure because the added nitrogen is believed to help microbes break the manure down.

This reveals the value of microbes. As they break down organic matter, the nutrients created become more readily available to plants while decomposed residues build up overall organic matter in the soil. This ensures a healthier, more robust soil over time that supports the ecosystem.

Upon learning these results, a farmer may think it’s time to develop a new composted manure plan for their forage field. However, there are numerous details to assess prior to doing so. The first, and perhaps most obvious, is to test the soil to determine nutrient needs. Returning to the microwave analogy, the food must be tested to see if it’s hot before heating it up.

Soil testing ensures current nutrient levels are reviewed prior to manure application which allows farmers to select the right compost for the growing needs of the land based on the intended crop. This baseline then leads to the need to know the nutrient levels within the types of manure available. Analyzing both the soil and the manure will allow for calculating application rates to meet the needs of the plants without over-applying.

“If someone is using their own manure or locally-provide manure from another farmer, they should definitely get the manure analyzed for nutrient levels including nitrogen if possible, phosphorus, potassium and other nutrients that we commonly test for in fertilizers and soils before use,” she says. “Farmers should treat manure like a fertilizer, where the carbon and benefits to soils and microbes is a bonus.”

Finally, understanding the relationship between composted manure and a field’s particular soil also makes a difference to volume and timing of application. Soils that are wetter than the Texas study fields need to be assessed for run-off risks.

“Over-application might cause excess or unused nutrients to runoff into nearby water and cause potential pollution problems,” she notes.

Knowing runoff can be a concern was one of the reasons the study looked at low application rates.

“The composting process for the cattle manure helped reduce the chance of excess leaching or run-off of nitrogen,” she says. “Try not to apply manure before it rains or on a very windy day that could wash or blow the manure towards other areas or water bodies.”

Regardless of climate, Slaughter and her team are aware of the benefits of correctly applied manure, in the right format (type of manure and treatment) in improving soil health.

Appreciation of benefits must be balanced with the science of soil and plant nutrient needs as well as the speed at which the amendment is likely to degrade and make nutrients available in the soil. Over-application may not deliver the desired microbes and carbon immediately, but may lead to an overabundance of nutrients in the future. It’s like understanding the wattage of that household microwave before setting the time or power level.

“Farmers could plan to apply compost annually or every few years depending on their nutrient management needs and the supply,” she says. “There are likely to be continued benefits of applying compost over several years, although we only tested a one-time application for two years.”

The next steps for the research team will include exploring whether higher volumes of manure, or more applications per season, would achieve the desired results of increased microbial biomass and soil carbon more quickly. She will also be studying the role of moisture in the process of breaking manure down to promote the integration of its nutrients into the soil.