Features Environment Profiles
Made from manure: new material for packaging

A Connecticut farm is transforming their manure to planting pots and biodegradable packaging material. 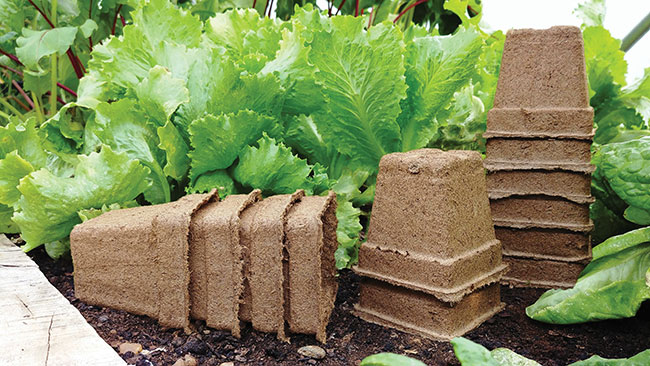 The Freund brothers experimented with thousands of prototypes for their planting pots made from manure before arriving at the final design.

One man’s manure is another man’s treasure, and that’s exactly what’s happening with CowPots. CowPots are biodegradable planting pots made from composted and dried dairy cattle manure. “The initial research and development began in 1997 after we built a digester and were looking for opportunities in which we could utilize the digested fibres coming off the screw-press separator,” notes Matt Freund, who co-founded the company with his brother Ben. With their families, Matt and Ben milk a herd of 300 cows with robotic systems in addition to growing field crops.

When they first started separating their solids, the Freunds composted and sold them. However, their neighbours with a much larger dairy herd started doing the same, but at a price the Freunds couldn’t compete with. They looked for alternatives, and after a number of trials, started using their solids for cow bedding. However, the brothers were still looking for a way to remove some manure from the farm on an ongoing basis, which would be a positive for both the farm business and the environment.

Phosphorus loading of watersheds is a serious issue in New England, and Freund notes that the Natural Resources Conservation Service of the United States Department of Agriculture (USDA) is working to determine a phosphorus cap for P application on Connecticut farm fields. Many of the state’s fields are already over the likely P threshold, he says, and in some cases by double or even triple.

The Freunds had the idea to make biodegradable planting pots from composted manure and kicked the idea around at a meeting of the Canaan Valley Agricultural Cooperative. The Cooperative brings together livestock farmers, personnel from the state and federal departments of agriculture and energy, University of Connecticut Extension staff and more to discuss better nutrient management.

What started as a conversation became CowPots. Freund says that since they officially launched CowPots in early 2006, 12 to 15 per cent of the farm’s total manure leaves the farm that way. Some solids are still being used for cow bedding, and Freund explains that they’ve “managed to meet the needs for both, [although] there are times in the year where the CowPots factory demands more of the material.”

Some solids are still being used for cow bedding, and Freund explains that they’ve “managed to meet the needs for both, [although] there are times in the year where the CowPots factory demands more of the material.”

The CowPots business generates an important stream of farm income for the family. Two of Matt’s children, Amanda and Isaac, work full-time at CowPots and farm’s businesses. Matt’s wife Theresa and daughter Rachel work at the farm market and garden centers, where they make use of thousands of CowPots every year. 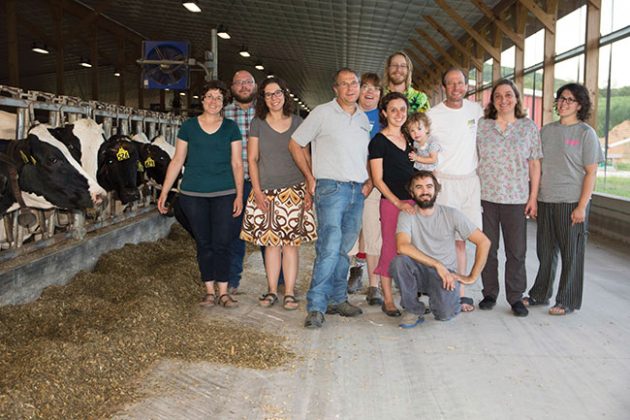 The entire family is involved with the CowPots business, from working behind-the-scenes to using the planting pots in their farm market and garden centers.

How it all started

When Matt first tried to make the prototypes, he experimented with various methods and shapes, and even dried them using the family toaster oven. Later on, the Freunds received of grant of $700 from the Sustainable Ag Research and Education Program (SARE) to focus on their idea and spared the rest of their kitchen appliances.

The grant allowed them to invest in equipment to prove the concept of their idea. “It also demonstrated that we could follow through and were accountable,” Freund explains. “This was an important jumping off point for future grants. We’ve successfully received another SARE grant, as well as USDA Small Business Innovation Research Phase 1 and 2 grants to make real capital investments in our process.” They also procured grants from USDA Rural Development and USDA Rural Energy for America Program (REAP), as well as from the Connecticut Department of Agriculture and Department of Energy and Environmental Protection.

Thousands of prototypes in the early 2000s never made the cut, and ended up being used among regular cow bedding and then, into the digester. The process started all over with new prototypes.

Along the way, after approaching organizations for help, Freund found a Canadian equipment manufacturer who was able to provide some guidance on the best manufacturing process. “Then I inspired a retired engineer to help me refine the process and develop the equipment we needed to move forward,” he recalls. “We use a pulp molding process. The forming machine is custom-built to meet our production needs. The pots are dried to zero percent moisture to eliminate any E. coli issues.” 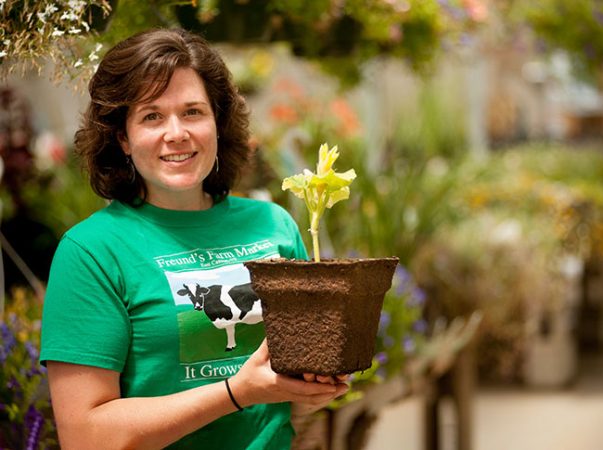 The family’s garden market also makes use of the CowPots planting pots. Photo courtesy of CowPots.

In the first year, they approached hardware stores, garden centres and growers in their tri-state region, which include New York and Massachusetts. “We were introducing a brand-new product to the market at a very high price, so at first the product (and we farmers) were met with some skepticism,” Freund recalls. “It was a slow but steady buildup of local business interest.” He adds that the price has come down significantly as their cost of production have decreased.

One of the early adopters was a national catalog business called Gardeners’ Supply Company, the leaders of whom, Freund says, appreciated the innovation and the environmental qualities of the product. The Freunds also received assistance from the USDA to attend an international trade show for growers in Essen, Germany, which put them face-to-face with potential new customers. “At that show, we were visited by one of the largest greenhouse growers in the U.S. who decided to begin using our product in one of his commercial greenhouses for growing bedding annuals,” Freund says.

“At that show, we were visited by one of the largest greenhouse growers in the U.S. who decided to begin using our product in one of his commercial greenhouses for growing bedding annuals.”

The greenhouse deal helped break the ice, but another big marketing turning point came when, during the summer of 2006, their application to appear on the television show Dirty Jobs was approved. By the fall, they were shooting their segment with host Mike Rowe. “There are reruns on to this day and it has played in 120 countries,” Freund says. “At the time, we were still such a new company that we were underprepared for the attention it would bring to our homemade website, and it actually exceeded our bandwidth and our site crashed following the airing of the ‘Poo Pots’ episode. To this day, people recognize our product as ‘that thing from Dirty Jobs.’ I can’t put a direct money amount on the sales, but the international recognition and attention for a small start-up company has been very impactful.”

In 2007, the show’s host Mike Rowe asked Matt to join him on Larry King Live, which gained them further attention. In the same year, working with Gardeners’ Supply Company, CowPots received national recognition from winning the Green Thumbs Award from the Direct Gardeners Association. In 2008 and 2009, the Freunds presented their product on The Martha Stewart Show and The Today Show.

Along the way, the family persisted in getting CowPots into some of the big national retail chains. “Eventually, ‘no thanks’ turned into ‘sure, we’ll give it a try,’” Freund says. “That’s how we got CowPots into True Value and Tractor Supply Company.” 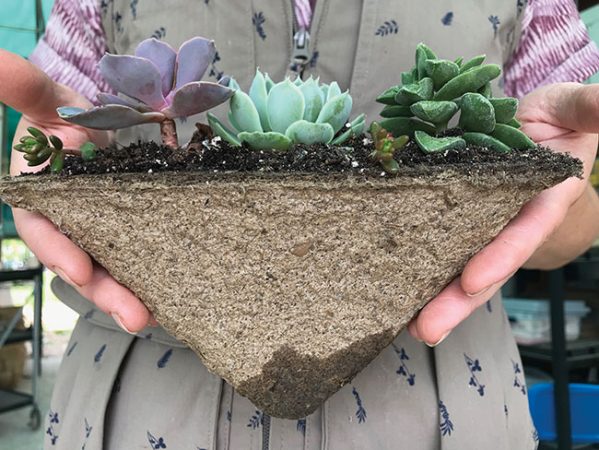 Recently, the brothers have expanded to created packaging – like packing corners – from their material. Photos courtesy of CowPots.

As you might have guessed, the future for this environmentally-conscious, effective and innovative product is looking bright. The Freunds are routinely asked by other farmers if they can be manufacturers, and just in September 2019 alone, they fielded requests to license the technology by business people in Ivory Coast, Australia and England. However, the Freunds feel that at this stage in the development of CowPots, they are not quite ready to look to additional manufacturing sites.

Despite not looking for manufacturing sites, they are still diversifying what they manufacture. Most recently, CowPots Packaging was launched during PackExpo, a trade show dedicated to packaging equipment held in Las Vegas in September 2019. The company launched a “new alternative to fiberboard” with biodegradable items like packaging corners that protect items during shipping. Instead of throwing packaging material in the trash, customers can throw the CowPots fiber in their garden, yard, or compost to naturally degrade.

When asked about the whole journey, Freund says determination has certainly played a big role, but adds, “Each year along the way, we’ve had reason for optimism, from university trials demonstrating our pots stood out against competition with horticultural benefits to growers sharing their testimonials on how well the pots worked for them . . . some years it’s been as simple as a few new customers or a big grower-prospect that gives us reason to keep moving forward.”

They’ve needed that determination and optimism, as CowPots have always been a premium product competing with cheaper alternatives. However, Freund adds that “we’re hoping the increased attention on the need to reduce plastics will drive more stores, growers and consumers towards renewable and biodegradable alternatives like our pots.”