New hire brought on board to streamline fabrication processes. 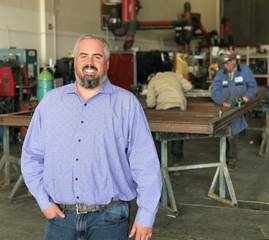 Livestock Water Recycling is committed to providing hog, dairy and anaerobic digester operations with the most effective and efficient manure treatment technology on the market. As part of this commitment, LWR has recently added a seasoned manufacturing veteran to their organization. Joel Darichuk, the company’s new production coordinator, has been hired to streamline LWR’s manufacturing processes.

Joel’s career in manufacturing stretches over two decades. Having grown up in the small farming community of Athabasca, he is also familiar with the unique challenges faced by the agriculture industry. For years Joel was a vital member of his family’s flexible plastics manufacturing plant.

After 12 years of steady growth and expansion, he branched off to start up another plastics operation with his twin brother and father. This fullscale operation included an engineering and design department, a full tool and die manufacturing division and a 24-hour injection molding division. In 2012, Darichuk took on the role of designer and general contractor to build a 100,000+ square foot facility to house all of the manufacturing operations of the newly developed Alberta Innovation Manufacturing Center.

Joel played a key role in assisting and retaining manufacturing in Western Canada, and collaborated extensively with technical schools, universities, and innovation groups, while working with Government to increase awareness of growth opportunities in a wide variety of manufacturing sectors.

After working in the family business for over 20+ years, Joel decided to step away from the operation to explore opportunities in other industries.

“The team here at LWR has that same family feel that I’m used to” says Darichuk. “I’m excited to work with a group that is focused on positively and innovatively impacting both the environment and the ag industry” he adds. “Sharing these common goals and values is what made me want to be apart of this team, and I look forward to working here for many years to come.”

Karen Schuett, co-founder of LWR, was impressed with Joel’s extensive manufacturing experience, interpersonal skills, and his specific interest in innovating within the ag industry.

“We are lucky to have Joel join our team. His enthusiasm for manufacturing, his sense of humor, and his farming background make him the perfect fit,” says Schuett. “He has a strong background in innovation and has been challenged to find ways to further modernize our manufacturing to make our technology even more affordable for producers.”

Joel has already been hard at work and has many exciting new manufacturing and materials innovations on the horizon, including a new product release expected in early 2019! Joel and his wife Erica have three children and have recently welcomed their first grandchild. He enjoys camping and fishing, and with a true fondness for water, his vacations are often anywhere that he can spend his days boating or simply relaxing on the shore. Joel officially joined the team in July.