Twin Birch Dairy is ahead of the curve when it comes to fostering community relations and sustainable farming thanks to its innovative manure practices. 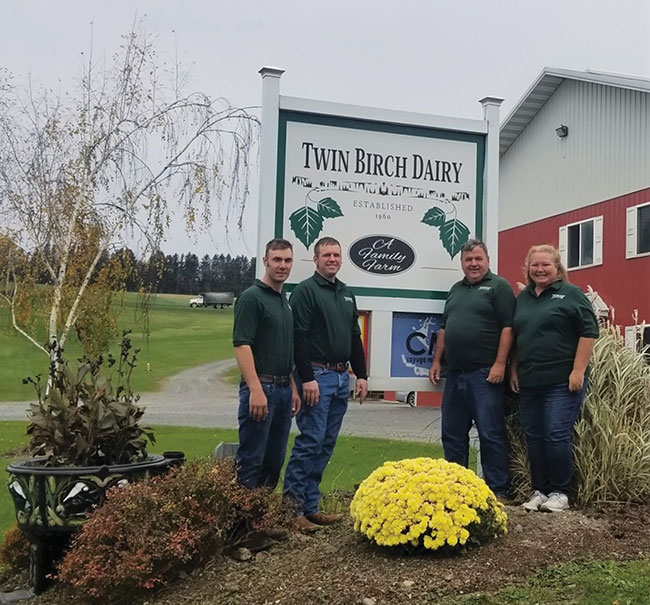 The people who run Twin Birch Dairy in Skaneateles, NY, know the importance of being good neighbors.

For Twin Birch CEO Dirk Young and his partners, Todd Evans and Jeremy Brown, a key part of this has been taking steps to minimize the impact of their manure handling and storage practices on the surrounding community. But it’s much more that that – it also reflects a strong commitment by the farm to environmental stewardship.

“Taking care of the environment and maintaining viable and sustainable practices is something we believe in strongly,” Evans says.

Evans says it’s a tradition that goes back a long way on the farm, which was purchased by Young’s parents in 1960. Twin Birch Dairy has expanded significantly since then, growing from a few dozen cows to a herd numbering more than 3,000. It’s also grown from 290 acres to 3,600 acres of farmland, where corn is produced for silage and grain and a number of other crops are grown as well.

Considering where the farm is located, it’s easy to understand why manure management is such a vital aspect of the farm’s business operation. Twin Birch Dairy is situated between two lakes in the Finger Lakes region of central New York state, right across the road from a golf course and close to million-dollar lakefront homes. The lakes are important for recreation purposes and their watersheds also provide drinking water to more than 400,000 people in nearby towns and cities.

Twin Birch Dairy recognizes that protecting water and air quality and maintaining good relationships with neighbors are key to the farm’s success, and industry honors – such as the Outstanding Dairy Farm Sustainability award it earned earlier this year from the Innovation Center for U.S. Dairy – are evidence of that.

“We kind of look at that as recognition of 30 years of progress,” Evans says. “We’re honored to receive the award because it’s something we really believe in and would be doing in any case.”

Sustainability practices on the farm include extensive use of wheat and oats as cover crops and other erosion-control measures, which greatly reduce runoff from the farm’s fertilized, nutrient-rich soils. Numerous other practices are in place that provide environmental and community relations benefits while also helping the farm make the best use of the manure it produces.

Back in the mid-1990s, Twin Birch Dairy built a remote bunker silo to store its manure so that odors would remain unobtrusive to neighbors; a second satellite storage silo was built in 2014. Evans notes that a total leachate collection system was also installed around the storage tanks to prevent any bunk water from seeping into the ground.

In 2000, Twin Birch became one of the first dairies in the United States to install an anaerobic methane digester, which reduces odor by capturing methane from cow manure and transforming it into biogas. The biogas is used to generate power for the farm, which until recently was more than enough to meet all of Twin Birch’s electricity needs. 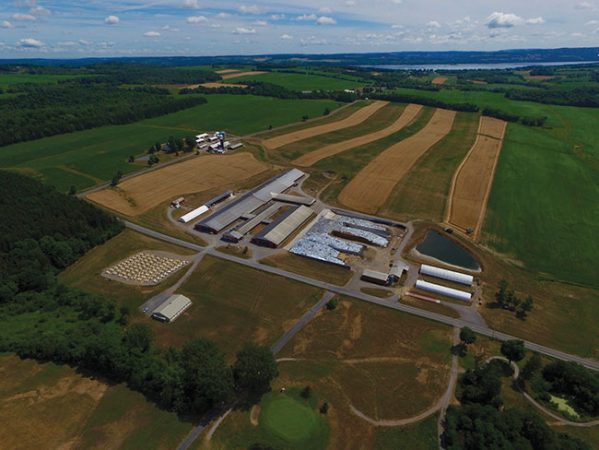 “Initially, it was over 100 percent,” Evans says, adding that the surplus was sold to the local power utility. With increasing cow numbers and new equipment purchases, such as pumps to increase manure handling efficiency, the power demands are greater and the anaerobic digester now produces about 80 percent of the farm’s electricity requirements.

In 2002, the farm added a solids-separator to enhance its manure handling procedures. Evans says the material that comes out of the separator is 96 percent liquid, which is much easier to pump into the farm’s two fertilizer storages. It also prevents solids from settling out and building up in the bunker silos.

Almost 90 percent of the liquid manure produced at Twin Birch Dairy is transported out to fields via a pipeline and drag hose system and incorporated or injected directly into the soil. This not only reduces the risk of nutrient runoff, but also greatly reduces manure-related odors.

“We don’t have a dozen trucks carrying manure barreling up and down the road. The manure is not surface-applied, it’s all covered up, and I think this is a very important aspect of the way we handle our manure,” Evans says.

The solid matter that comes out of the separator is used as bedding for the farm’s cows, eliminating the need to bring sand, sawdust and other bedding material in from outside sources. Any excess bedding produced at Twin Birch Dairy is sold to landscapers, home gardeners and another local dairy.

Evans says he and his partners view the costs associated with making their operation more sustainable as money well spent, because it means Twin Birch Dairy will remain a successful business for generations to come.

“I would say that most of the time, the costs associated with conservation and sustainability usually offset themselves with better land quality and water quality,” Evans says. “You also have to have the support of the community. If we can’t maintain a good view in the public’s eyes, then we won’t be farming here.”