Custom applicator’s diversification into fabrication and rental pays off 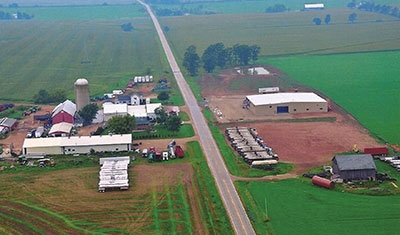 While Phil’s Pumping & Fabrication applies about 700 million gallons per year, the company has recently constructed a new metal fabrication shop to supply a wide variety of accessories that they sell to other custom applicators throughout the American Northeast. Contributed

A good piece of advice to succeed in business is to investigate what the experts do, pay attention to the equipment they use and then follow their example. When it comes to custom manure application, Phil’s Pumping & Fabrication has decades of experience and markets many of the critical pieces of equipment they use to other custom haulers.

Located in Chilton, Wisc., about 35 miles from Green Bay, the company has developed into a unique business combination over its 33 years, developing into both a custom manure applicator as well as a fabricator of manure application equipment, supplying its products throughout the northeastern region of the United States.

“The custom fabrication aspect of our business evolved from the days when we’d buy a piece of brand-new equipment and we’d have to go through it for two or three days to refine it to the way that we wanted it,” says Schneider. “It seemed that nothing was ever big enough or strong enough, so at that point, I just started building my own stuff.”

He adds that the company fabricates its equipment and accessories right from scratch, and just recently opened a new 150 by 125-foot building dedicated to this branch of its business, which now includes a parts department and a showroom. The business would conduct most of its fabrication during its downtime, which is typically from December to March, and put all their staff to work in the custom application branch during that busy season, but with customer demand, they have now decided to continue to fabricate throughout the year.

“We always try to fabricate equipment that outperforms existing equipment,” says Schneider. “We keep analyzing what we are doing, what breaks down, how we can do the job faster and how we can keep the employees happy.” That’s one reason, he adds, that he has not sought patents for his equipment because he doesn’t want to limit the company’s ability to constantly improve the equipment and accessories that they fabricate. One advantage that the company is able to offer to its customers versus purchasing equipment off the shelf is that they listen to what the customer wants and customize the equipment according to their needs.

“Whether it’s a farmer or a custom irrigator, they all want something different,” says Schneider.

Another rather unusual aspect to Phil’s Pumping & Fabrication is that they also rent equipment, which is not a common practice among custom manure applicators but a valuable service to landowners who may want to handle manure application themselves or for other custom manure applicators who may need one or two items, such as a lagoon agitator or pump, for a particular job. The business even rents tractors, and when it’s the busy application season, Schneider says all 20 tractors are either working for him or rented out.

“The rental aspect came in when we realized that the equipment was sitting here, so why don’t we use it,” says Schneider. “Everything in the industry now is a numbers game and using the equipment as much as you can. It got to be a more common thing where people wanted to use it, we let them use it and organized everything, so that now, the equipment gets out as much as possible.”

Because of the seasonal nature of custom manure application, many businesses have significant downtime during the winter. It has become common practice for them to use this time to put some of their own ideas for custom manure equipment together. Schneider says they’ve noticed that many other businesses come to his fabrication and supply shop to pick up the components they need to fabricate their project.

He operated a dairy farm in partnership with his brother, together offering custom manure hauling services in 1980 in tandem with operating their dairy. In 1998, the brothers sold their dairy herd and Phil struck out into custom manure hauling with his wife, Bonnie, as well as his sons, Steve and Tom, and daughter, Kate, helping out in various aspects of the business.

Phil’s Pumping & Fabrication custom applies about 700 million gallons of manure primarily from dairy operations annually, within about a 60-mile radius of home base. The average customer has a dairy herd of about 2000 cows. The fabrication and supply side of the business draws a wider variety of customers from a much larger area, with customers coming from as far away as Illinois, Ohio, Michigan and Minnesota.

“The Internet really helps because it gives us a lot of exposure,” Schneider says.

Given his more than three decades of experience, Schneider has witnessed considerable change in customer requirements within the custom application business and the ability to adapt to those changes has helped to keep them busy and expand their services over the years.

“Our customers are considering the value of the manure a lot more now rather than simply land applying it as a disposal method,” says Schneider, “which is good for the environment and a good use of the manure.”

As customers put more value on the manure, it has become more and more important for Phil’s Pumping & Fabrication to keep accurate records of where and how much manure is being applied for each customer on an annual basis. Many farms now work with crop consultants that recommend specific manure application prescriptions for each farm based on what crop is being grown and also how much has been applied to the farm historically. So keeping an accurate historical record is critical to ensure that the customer is achieving the maximum nutrient value from their manure.

“We’re also going further away from the farms with both laying down hose and transportation with our semi trucks,” says Schneider. “We used to go two or three miles with a big run and now we go 15 or 20 miles.” What has influenced this trend is the development of bigger dairy farms generating more manure and needing a larger land base for manure disposal, as well as new regulations as to how the manure is applied.

“The value of commercial fertilizer has also increased in cost, which makes it more economically feasible to transport the manure longer distances for land application,” says Schneider.

The company also has three drag hose manure application systems with five miles of hose, and four 6,000-gallon tanks, which are pulled by tractors. Three are Balzer tanks and one is a Calumet tank. They also have two 5,000-gallon, Calumet tanks. Pulling the tanks are 8000 series, John Deere tractors in the 200 to 250 horsepower range. The fleet is designed so the company can provide service to both small and large farms, with the tractors and tanks used primarily on smaller farms where the manure is being spread on cropland fairly close to the farm.

They also offer their customers a variety of options for land applying the manure, such as top dressing application, deep till injection as well as splash and incorporation.

About 75 percent of the manure the company transports and applies involves the semi truck and tanker operation, with the farmer incorporating the manure right behind the trucks. About 25 percent is applied using their drag hose systems, where a toolbar attached to a tractor is used to apply the manure and then incorporates it immediately into the soil.

“The reason we do that is to avoid trenches and nitrogen lines, which results in more uniform application,” says Schneider. It also does a better job of placing the manure exactly where it is most effective at the correct soil depth.

To pump the liquid manure from lagoons to the field with their drag hose systems, the company uses John Deere power units with Cornell pumps and Krohn flow meters in the tractors.

Phil’s Pumping & Fabrication manufactures its own toolbars as well as its own frac tanks, which are used for onsite storage as the manure is transferred from the farm and being land applied.

As far as incorporation, Schneider says they generally will not deliver the manure with their semi trucks and trailers unless the farmer is working it in right behind the trailer to incorporate the manure as a safety measure.

“We as custom applicators don’t want to pollute anything,” he says. “We are more concerned about that than anybody.”

The company’s overall philosophy is to provide timely service so that whether it is a farmer or manure applicator customer, Phil’s Pumping & Fabrication is able to respond to meet their application needs or have the parts and equipment available when they need it. Schneider says that counts for a lot in today’s fast-paced world.