The latest results from Manitoba about what affects survival of this virus in earthen manure storages. 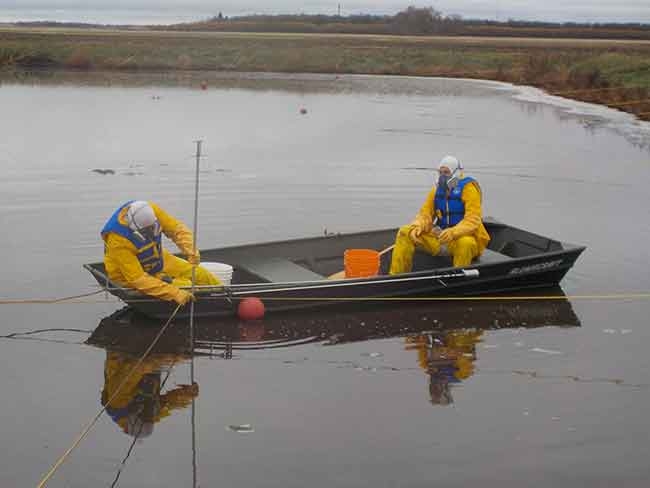 A study to find out how long PEDv survives in earthen manure storages and under what conditions was first initiated in 2014 by the Manitoba Livestock Manure Management Initiative. Contributed photo

As everyone who farms swine in North America knows, porcine epidemic diarrhea virus (PEDv) is a very serious issue. More than eight million pigs have died of it since early 2013, and several Canadian swine farms were identified as PEDv-positive with recurrent infections.

Eradication of PEDv from farms where it’s present is a tough goal to achieve, and one of the most important considerations is how infected manure is handled and managed. In Manitoba, swine farms generally store their manure in earthen manure storages (EMSs; sometimes referred to as lagoons). These outdoor manure storages are obviously colder than under-barn pits and, contrary to what one might think, PEDv does well in them because it likes colder temperatures.

But how long does the virus survive in EMS-stored manure, and under what conditions?

A study to find out was first initiated in 2014 by the Manitoba Livestock Manure Management Initiative (MLMMI), headed by Ehsan Khafipour, assistant professor of gastrointestinal microbiology in the departments of animal science and medical microbiology at the University of Manitoba.

Finding out how long the virus can survive – and what affects its ability to infect – is critical for manure management.

“Most pork producers in Manitoba apply their own manure by contracting it out every year,” explains Mark Fynn, manager of quality assurance and animal care programs at the Manitoba Pork Council (which provides funding for MLMMI research). “These applicators use machinery that goes to numerous swine farms in a season and has the potential for carrying viruses between farms, especially since it is so hard to get the machinery immaculately clean.”

Fynn says that since the risk of PED virus transmission by manure spreading has been unknown, farmers were not willing to take the chance of having manure application equipment used at PEDv-contaminated sites being used at their own farms.

“We needed to be able to quantify the risk that lagoon-stored manure posed to the industry,” he says. “And answer the question of whether the virus is still viable, and therefore still poses a threat, several months after an outbreak.”

The study aims were to monitor survivability and infectivity of PEDv in infected EMSs, and to test in the lab how different temperatures and incubation periods affect PEDv. Two separate infected EMSs were sampled in the fall of 2014 with a second round of sampling in late spring 2015.

Sampling was carefully done to make sure PEDv didn’t spread from the research activity sites.

“We had to assume that the lagoon was highly infected and everything that was on the site – equipment and personnel – would also be infected,” says Harvey Chorney, vice-president of Portage operations at the Prairie Agricultural Machinery Institute (PAMI), a partner in the research. “We brought in protocols which included a change tent with sides that separated clean street clothes and
assumed-to-be-contaminated ‘site’ clothes.”

Only manure samples – stored in double-layer containers – were removed from the sites by personnel wearing clean clothes and boots. Vehicles that carried the samples were parked at the road and washed after each sampling. The samples were transferred to another vehicle before being taken to the University of Manitoba lab for analysis.

“Upon completion of the sampling, all waste and equipment [that] could not be sterilized was burnt on site,” Chorney adds. “Larger equipment was exposed for a period of time to heat to kill any possible PEDv that might be present. The maintenance of discipline was critical in following protocol we had established. We had no spreading of the virus so we assume success.”

Results
Lab analysis revealed that PEDv could survive and be infective for at least nine months in infected EMSs, in Manitoba’s climatic conditions. PEDv infectivity declines at pH less than 4 and greater than 9 (with 7 being neutral). The pH of the EMSs varied from 6.6 to 8.4 with the lowest pH at the bottom layer and the highest in the top layer, which is within the range for PEDv to remain infective.

“In general, PEDv favors neutral pH but can tolerate a wide range between pH 5 and 9,” Khafipour notes. “However, temperature is a factor. PEDv is active in the pH range between 5 and 9 at 4 Celsius for example, but the range narrows down with increased temperature to between 6 and 8 at 37 Celsius. However, regardless of temperature, the viruses completely lost the ability to replicate at pH less than 4 and over 9.”

It was also noted that the virus population in both EMSs increased approximately five months after infected manure was placed into them.

“This suggests that PEDv may replicate in a EMS by using another host besides swine,” Khafipour says. “In both sites, the entrance pipes to the EMSs were sealed before sampling started, so there was no inflow of fresh manure, wash water or disinfectants during the study. Under these conditions, we expected that the virus population would either stay stable or decline over time.”

However, in EMS #1, the viral load significantly increased after the third week of sampling in all three layers, and it significantly increased in the early spring in EMS #2. This could not have been due to evaporation of water (which would increase the concentration of virus per ml), but can only be because the PEDv is replicating in the EMS outside of its typical host (swine).

It’s already known that PEDv can replicate in mammal cells other than swine, but Khafipour says in this EMS scenario, the alternative hosts are likely single-celled protozoa or amoeba.

“EMS naturally inhabit some amoeba and protozoa, but we’d need further research to investigate this aspect of PEDv survivability,” he explains. “What we are currently doing is looking at how the PEDv may have evolved in the samples collected in fall of 2014 to the early summer of 2015. Although PEDv might be able to replicate within an EMS, its ability to infect declines over time. This might be because generation after generation of the virus within the alternative host is pressuring it to evolve in ways that lower its ability to infect its previous host – swine.”

Both of the EMS sites were positive as well for porcine delta coronavirus (PDcoV). Khafipour found that PDcoV survives in EMS over a Manitoba winter, but he didn’t test its infectivity.

“PEDv is more sensitive to +20 Celsius temperatures, which over time, can significantly reduce its population, so the longer you can let it sit into summer, the better,” says MLMMI executive director John Carney. “The optimal time to spread PEDv-positive manure is likely on warm, dry days. Sunlight [UV radiation] and warmer temperatures may reduce the ability of the virus to infect and prolonged agitation of an infected EMS may aid in exposing the EMS’s contents to these conditions.”

It is also recommended that producers hold back and treat infected manure in under-barn pits before pumping manure into EMSs where it could potentially flourish.

“When pumping manure,” Carney adds, “applicators should follow a sequence, beginning with PEDv-negative sites, followed by sites with the longest time since an outbreak to sites where PEDv was most recently reported.”

For more information on the study, visit manure.mb.ca/projects/viewproject.php?id=97 or journal.frontiersin.org/article/10.3389/fmicb.2016.00265/full.