The Gutshalls first demonstrated their new machine design at the North American Manure Review in Chambersburg, Pa., in 2015. All photos courtesy of Virgil Gutshall Sr.

What resulted was a machine, designed by Virgil and his son, that simultaneously side-dressed the corn with liquid hog manure, while planting a cover crop. The new machine allowed the Gutshalls to fertilize their crop in June, when the corn was growing, to more fully utilize the nitrogen from the hog manure, thus increasing yields.

The Gutshall seeder/injector came to pass due to a chance meeting. Virgil Sr. was at the Keystone Farm Show in January 2013 and talked to a former colleague.

“He put me in contact with Ohio State, and told me they had a two-day workshop on composting in March,” Virgil Sr. says. “My wife, Pat, and I went out for that, where we learned about the Manure Science Review held in Ohio in August. There we met Glen Arnold, the manure management specialist at the Ohio State Extension. Glen was doing some side dressing and incorporating hog manure into corn fields out there.”

“What really inspired us was when Glen said we could get 15 to 20 more bushels of corn per acre by side dressing with hog manure,” Virgil Sr. adds.

“What really inspired us was when Glen said we could get 15 to 20 more bushels of corn per acre by side dressing with hog manure.”

Arnold remembers the meeting. “He saw what we were doing here in Ohio and went back to his farm and worked on similar systems. We have corresponded over the years, comparing notes.”

Virgil Sr. came home and told his son about what he learned from Arnold, and Virgil Jr. picked up the idea and the designing began. Throughout the process, correspondence continued with Arnold.

One of the challenges the Gutshalls faced was the different topography where they farm in Pennsylvania. In western Ohio, the land is flat and a long drag hose system is effective. While they started side dressing corn with a manure tanker, Ohio State University researchers eventually evolved to using a drag hose to reduce soil compaction and gain greater efficiency. With more hills and smaller fields requiring more turns in Pennsylvania, something else was needed – a tank spreader.

“We were able to buy a used Gandy orbital air seeder fairly cheap,” Virgil Sr. says. “Then my son was able to locate a device that fastened onto the tank spreader, which controlled the amount of liquid going onto the field, based on our tractor’s computerized settings. My son can set the rate depending on the soil tests, the manure analysis, and the crop needs.”

While designing, Virgil Jr. decided to take the Ohio State concept one step further and combine the air seeder and the tank spreader.

“Our goal was to spread when the corn is at the V3 stage, but as long as you can get through with a tractor and don’t break the corn over, you’re okay,” Virgil Sr. says.

Gutshall Jr. was the primary designer and three different machinery dealers worked with the Gutshalls as the project evolved, including Valley Ag and Turf (now LandPro), Cedar Crest Equipment, and Binkley and Hurst.

“If we had a question, they’d help us out,” Virgil Sr. says.

The final product was a Houle 4,250-gallon tank manure spreader with a toolbar mounted on the back and equipped with five Yetter Avenger manure injectors, which incorporate the liquid hog manure four inches into the soil, close to the corn’s root zone. A Gandy Orbit air seeder is mounted to the top of the toolbar that broadcasts the cover crop seeds (which included ryegrass, crimson clover, and tillage radish) behind the injectors. The manure flow rate is controlled by a John Deere Greenstar 3-2630 monitor, which connects to a Krohne flow meter and computer controller mounted on the manure spreader. 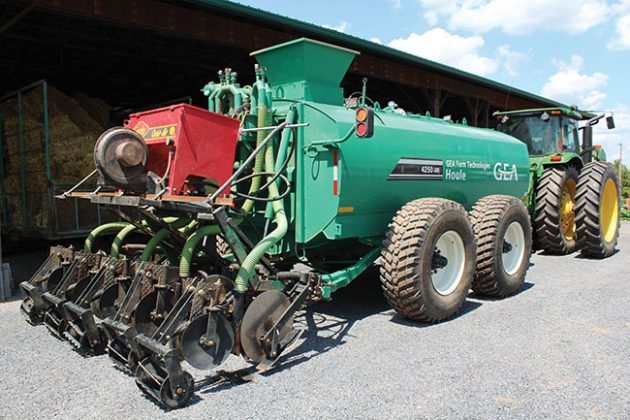 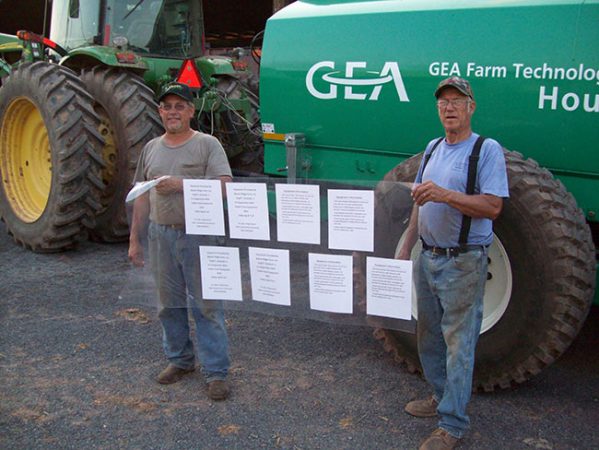 It was 2015 when the Gutshalls were ready to demonstrate their new machine at the North American Manure Review in Chambersburg, Pa., and the response was great.

“They thought that was just like Christmas to see something doing this with the least soil disturbance or anything like that, so it really worked out fine,” Virgil Sr. says.

“I thought he was going in the right direction,” says Arnold, who attended the demonstration. “Manure – swine manure especially – has a lot of ammonium nitrogen. As much as 30 to 40 pounds of ammonium nitrogen to 1,000 gallons of swine manure. And that’s nitrogen that we often waste because we often apply the manure in the fall when there is no growing a crop. Or, we put it out in the summer without the intention of trying to grow a cover crop or grow a second forage crop for dairy like Sudan grass or sorghum. Manure can also be used between cuttings to help alfalfa to regrow. And that’s what Virgil is doing. He’s putting that manure down into the ground three or four inches deep and capturing almost all those nutrients. And he’s doing it when the corn is growing, at least four-inches tall, when it needs it the most.”

With the new system, the Gutshalls are seeing results. “We did about 15 or 20 yield checks in 2018 and there is a definite increase in yields,” Virgil Sr. explains. “A range of 135 to 211 bushels per acre, with an average of 183 bushels per acre.”

However, he adds that yields do depend on the weather too. “If you have good weather, you’re going to get a good crop. However, this farm has been in operation for about 113 years, and the 2018 crop was the best corn crop that I can ever remember.”

Virgil Jr. does do experiments to test the yield. One simple test in 2018 was to use the injection system on six rows and then not on the next six rows.

“You can see a difference in height in the corn stalks from where we injected the hog manure and where we didn’t.”

“You can see a difference in height in the corn stalks from where we injected the hog manure and where we didn’t,” Virgil Sr. says.  “He also did some experiments with side-by-side varieties, some injected and some not. There was a definite difference.”

The Gutshalls – who have been no-tilling since 1980, and in recent years strip-tilling on some ground – are also experiencing positive soil and other environmental benefits with the new system.

“The manure is a good thing to incorporate,” Virgil Sr. says. “With this system you have very little soil erosion with your cover crop. So, you lose very little of your nutrients due to soil erosion. Also, if you inject the manure into the ground, you reduce the odor almost entirely. Most importantly, there is a decrease in the amount of greenhouse [methane] emissions into the atmosphere.”

Virgil Sr. adds that some people do bring up that this method could allow the manure to get into the groundwater, but he doesn’t see a problem if you are responsible and monitor how much they apply.

The biggest challenge with the system to-date is the speed. It is definitely tailored more for the small farmer, with smaller fields. As of yet, there hasn’t been a lot of interest from commercial manure applicators who prefer either broadcasting the manure or using the drag hose system, which Arnold is working to perfect.

“Injection is a slower process,” Virgil Sr. says. “Normally, if you take a 4,250-gallon tank of manure out to the field and broadcast it just on top of the ground, you can get it done very quickly. But if you inject it, you have to go slower.”

He also adds, with this kind of system, you need to ensure you have enough manure in the tank to get you to the end of the field, “because you don’t want to go back through where you’ve already spread.”

The Gutshalls use a tractor-trailer that serves as a nurse tank in their outlying fields. They pump from the nurse tank into the manure tank spreader, which saves wear and tear on the tractor, as well as time.

“Injecting any manure will cost more than surface application but offers the benefit of better nutrient utilization,” Virgil Sr. adds. “However, since manure nutrients are better utilized with injection, more acres will be required for manure application. Thus, needing more acres for manure injection could be a drawback.”

“Injecting any manure will cost more than surface application but offers the benefit of better nutrient utilization.”

The Gutshalls are still working on the system and perfecting it. Ideally, they would like to have that niche piece of equipment that would work for farmers on hillsides and contours.

“That’s the next step,” Virgil Sr. says, “to get into some of the fields that are a little hillier and see how that works.”