Can producers eliminate headaches associated with manure storage, handling and application through the use of manure nutrient management products? 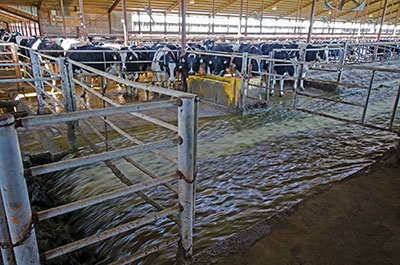 Some farmers have noticed a significant reduction in ammonia levels in the dairy herd confinement areas with the addition of manure nutrient management products. Contributed

Working with his mother, Cathy, and father, Joe, Andy Mroczek milks approximately 85 Holsteins and farms 425 acres of corn, wheat, alfalfa and soybeans near Honeoye Falls, N.Y. Manure is used as a fertilizer source on many fields, and Mroczek is adamant about maximizing the nutrient value of applied manure and ensuring that nutrients stay where he puts them.

“Any nutrient that runs off our farm is money out of our pocket,” Mroczek says. “We are equally concerned about water quality and keeping our streams, rivers and Lake Ontario clean.”

Maintaining a high nutrient value and keeping nutrients where they are applied can be a particular challenge with manure, compared with use of commercial fertilizers.  For years, Mroczek used a nitrogen (N) stabilizer with good results, but he was interested in bringing that benefit to his manure applications to maximize the effectiveness of phosphorus (P) and N plant uptake and reduce the runoff of those nutrients. Three years ago, Mroczek began using a nutrient management product and conducted trials with treated versus untreated dairy manure.

“I feel like, for every dollar invested in the fertilizer enhancer, I’m getting two dollars back,” the New York producer says. “We’ve seen yield increases ranging from five to 10 bushels per acre in corn where [the treatment] has been used.”

Mroczek either applies the product directly to manure lagoons, or he streams it over the manure during application with a dual-disk injector. Both methods, he says, work very well for him.

“We are seeing a very good response with our phosphorus,” he observes. “This year, we had four inches of rain in the month after planting, and the corn suffered due to the saturated soil. But, once the fields dried out, we had very healthy plants with a rich, darker green color.”

Another benefit he cited is a significant reduction in ammonia levels, both in the dairy herd confinement areas and in fields treated with manure.

“We inject the manure and cover it up in one pass,” Mroczek explains. “I estimate we’ve had an 80 to 90 percent reduction in ammonia odor when using the product. Our neighbors have come up to us and asked when we were going to spread manure on our fields, but we had already done so a week or two previously.”

“We have mostly used this manure nutrient manager in lagoons and pits, and we’ve had great results,” Hassenger says. “Just about all the producers who have tried the product have continued using it. Benefits include reduced foaming when pumping manure into tanker trucks and the ability to haul more manure per truckload. Producers are getting a better clean-out of pits and lagoons and a more consistent manure mix in terms of pumping characteristics and nutrient distribution.”

“Put simply, [it] makes manure much easier to apply,” he says. “After treatment, there is no water on the top or solids in the bottom of the pits or lagoons. Pumping is easier, and nutrient distribution is more even.”

Wagester notes a difference in manure handling during the spring and fall crunch when livestock producers are under the gun to get manure pulled out of pits and lagoons.

“In the spring, there’s a very narrow window to empty pits and get the manure applied to fields,” he says. “It helps speed this process by making the manure much easier to pump.”

Leroy Schafer operates Jem-Lot Dairy in Westphalia, Mich., and milks approximately 150 Holsteins, five Jerseys and raises approximately 130 replacement heifers. The operation’s manure goes into a lagoon with a concrete bottom, which is emptied in the spring and the fall.

“We pump out what we can, then remove the rest with a skid loader,” Schafer explains. “Using [the product] has made the manure in the lagoon more consistent and much easier to pump.”

The Michigan dairyman applies the product directly into his lagoon in both spring and fall.

“We don’t have to burn nearly as much fuel mixing and agitating as we used too,” Schafer points out. “Another plus from is that it has virtually eliminated foaming in our tanker-truck loads, which gives us more hauling capacity and the ability to haul more manure in fewer trips. This product is probably saving me three or four tanker loads due to the reduced foaming.”

Schafer also says that his treated manure has significantly higher nutrient value because it makes more P and N available for plant uptake. “Both our soils and our manure tend to be low in phosphorus to begin with,” he adds. “We can now counter this situation, and all of these benefits translate into more money in my pocket.”

“I attribute this yield increase to improved nutrient uptake, and those extra bushels more than paid for the product,” he adds.

Dave Vincent is a director with Osborn Barr, working on behalf of SFP fertilizer enhancers and More Than Manure.