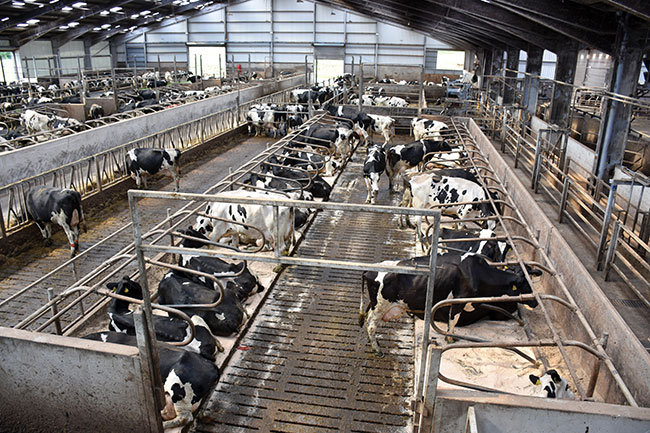 The N2 Applied plasma reactor processes digestate from the biogas plant on the Bingham farm, fixing nitrogen from the air and adding it to the manure.

A new system that has the potential to revolutionize the benefits of manure is currently on trial in two European countries. The new concept, developed by Norwegian company N2 Applied, involves passing manure or digestate through a plasma reactor to produce liquid nitrogen fertilizer.

With a goal of saving farmers up to 20 percent of their artificial fertilizer costs and to create a tool that reduces ammonia emissions, the company is excelling with two trials – one on a 750-cow dairy farm in Northern Ireland, and the other on a pig farm in Denmark.

George Bingham and his father, Robin, run the dairy farm, near Templepatrick in Northern Ireland. They installed a biogas plant one year ago, which produces electricity for the national grid. The N2 Applied system involves passing manure, or in the case of the Bingham farm, biogas plant digestate, through a plasma reactor to produce the liquid nitrogen fertilizer.

The plasma reactor was installed at the farm in 2018 on a trial and is already producing liquid nitrogen that has been spread on test plots at the farm. With knowledge gained in the fertilizer industry over many years, the experts at N2 Applied have developed and patented this technology that uses a plasma reactor that fixes nitrogen from the air and adds it to the manure.

This causes a reaction with the manure and stops ammonia losses as well as emissions of other greenhouse gasses, and additionally removing bad odor. Besides reduction of ammonia emissions, the system increases the nitrogen content in the manure and transforms it from a waste problem into a high-value fertilizer.

The main markets for this new technology are bigger livestock farms in North America and Europe, where greenhouse gas emissions are a problem and are being heavily regulated.

“Plasma processing is known for the sanitation effect by causing microbial reduction. But it also has an effect on the odor compounds and the result of processing manure or biogas digestate in a plasma unit removes the smell of the product,” says Henk Aarts, the business development director at N2 Applied.

“Our ultimate goal is to substitute chemical fertilizers with fertilizer produced locally on the farm from air and renewable energy.”

“Our ultimate goal is to substitute chemical fertilizers with fertilizer produced locally on the farm from air and renewable energy. And meanwhile, we work on a better stable climate and a more sustainable livestock sector. We can also upgrade biogas digestate to a higher value fertilizer with our technology. We expect the first steps to the North American market in 2020, depending on the interest from the market and potential partners.”

N2 Applied is partnering with SBI, an innovative plasma welding company based in Hollarunn, Austria, and together are using the competence of the University of Vienna for analysis of plasma composition and temperatures.

“We are still waiting for the statistical analysis report from the Bingham trial, but the preliminary results show that processed digestate had 10 to 20 percent better yield compared to unprocessed digestate and performs as well as mineral fertilizer,” Aarts adds. “So, the ammonium nitrate that we produce by fixing nitrogen from air shows good results on the field. This demonstrates that our solution indeed can substitute the use of mineral fertilizer. It leads to reducing emissions of ammonia on the farm, as well as GHG emissions reduction from the mineral fertilizer production and supply chain to the farm gate.”

The key argument to convince farmers to use this plasma reactor is explaining how much nitrogen from livestock and slurry is being lost and later supplemented by artificial fertilizer. In fact, about 2.13 million tons of ammonia is lost on European livestock farms each year – a huge loss of potential fertilizer.

About 2.13 million tons of ammonia is lost on European livestock farms each year – a huge loss of potential fertilizer.

Dairy farmer George Bingham said the system interested him as it met his desire to farm in a more environmentally friendly way. “Northern Ireland is very heavily populated with livestock, and ammonia emissions are becoming more of a problem,” Bingham says. “Using this plasma reactor system will help us achieve our goals of farming more environmentally friendly while at the same time, sorting out my ammonia emissions. I see this as a potential game changer across the world helping farmers get more from their farmyard slurry and saving them money.”

Bingham says that for his operation, reducing or even eliminating his chemical fertilizer bill is one of the main benefits of the system. “This system has only been installed a relatively short time and we have already produced our own liquid nitrogen and spread it on some grass test plots to see if the theories of faster plant growth with higher yields are feasible,” he says.

The payback term for using this system of course depends on farm size, usage and requirement.

“Our farmer’s business case shows a payback time of three years, based on an electricity price of €50 (approximately US$55 or C$75) per MWh and a nitrogen fertilizer price of €840 (approximately US$930 or C$1,234) per ton of nitrogen,” Aarts says. “The case is partly driven by the added value on yield increase, as well as flexibility in spreading caused by a higher content of nitrogen per volume and smell reduction. We see that the markets are very different, and many regional as well as specific farm conditions and factors influence the eventual case.”

Aarts explains the amount of product a 25-kW plasma unit can process annually depends on several parameters, like pH and composition of the input product. Based on a processing capacity of around 2,500 to 3,500 cubic metres (approximately 3,270 to 4,578 cubic yards) yearly, it can, depending on housing system and feeding, process the manure or the biogas digestate from a 100- to 200-dairy cow farm.

The company is currently considering the scale of commercial units and plans to have the first unit available in late 2019.