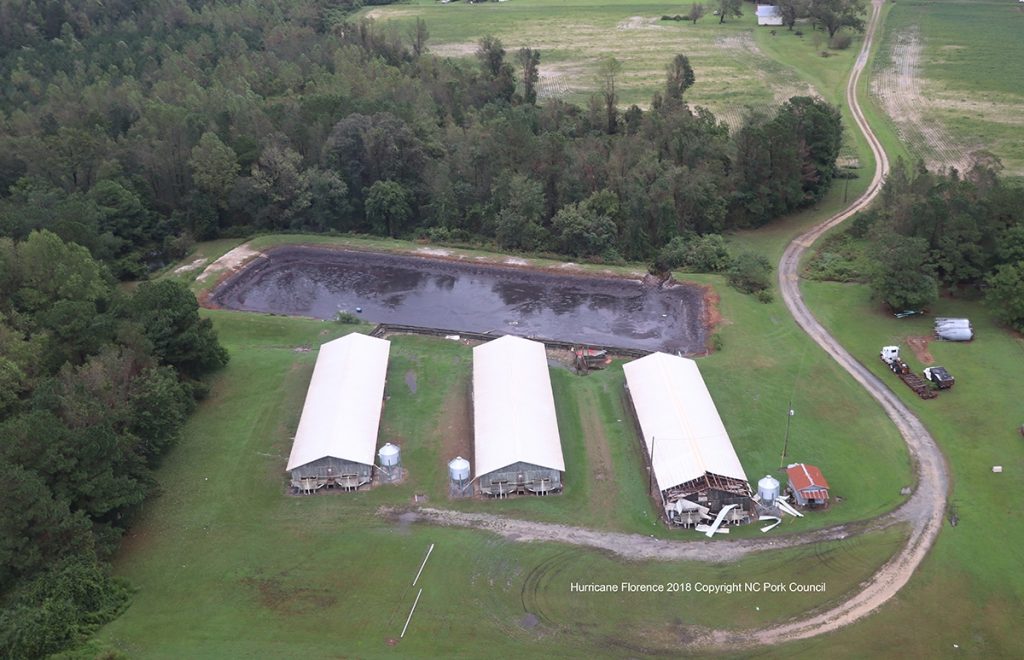 The historic floodwaters from Hurricane Florence are creating widespread impacts across all of eastern North Carolina. Several hog farms have been affected.

NC Pork Council officials are aware of one lagoon breach that occurred on a small farm in Duplin County, where an on-site inspection showed that solids remained in the lagoon. The roof of an empty barn on the farm was also damaged.

There are also three lagoons at other facilities that have suffered “structural damage.” It’s not known what this damage entails.

Nine other lagoons in the state have been inundated by floodwaters. This means the walls of the lagoon are intact but floodwaters have risen over the sides and filled the lagoon. The solids have remained settled on the bottom of the lagoon.

According to a report from NCPC, a further 13 lagoons are at capacity due to rainfall and appear to have overtopped. Others are at capacity and efforts are being taken to respond within the state’s regulations and with its guidance.

“We do not believe, based on on-farm assessments to date and industry-wide surveying, that there are widespread impacts to the … more than 3,300 anaerobic treatment lagoons in the state,” NCPC officials stated in a release. “Waters from the record-shattering storm are rising in some places and receding in others. We expect additional impacts to be reported as conditions and access allows.”

The farmer association added that in the lead-up to the storm, hog producers took extraordinary measures, including moving thousands of animals out of the hurricane’s path.

“The storm’s impact was felt deeply across a very large region and the approximately 5,500 swine losses reported … were the result of all aspects of the storm, including wind damage and flooding. We are saddened by this outcome.”

“We do not expect the losses to increase significantly, though floodwaters continue to rise in some locations and circumstances may change. Our farmers are working tirelessly now amid persistent and severe logistical challenges to continue the delivery of feed, to ensure power is operating on farms [as many use wells for water], and to reach the barns to provide proper animal husbandry. We believe deeply in our commitment to provide care for our animals amid these incredibly challenging circumstances.”