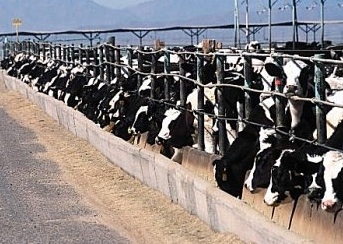 Wastewater from large dairy farms contains concentrations of estrogenic hormones that can persist for months or even years, researchers report in a new study.

June 12, 2012 – Wastewater from large dairy farms contains significant concentrations of estrogenic hormones that can persist for months or even years, researchers report in a new study. In the absence of oxygen, the estrogens rapidly convert from one form to another; this stalls their biodegradation and complicates efforts to detect them, the researchers found.

The study, led by scientists at the Illinois Sustainable Technology Center, is the first to document the unusual behavior of estrogens in wastewater lagoons. The study appears in the journal Environmental Science & Technology.

Just as new mothers undergo hormonal changes that enable them to breastfeed, lactating cows generate estrogenic hormones that are excreted in urine and feces, said ISTC senior research scientist Wei Zheng, who led the study. In large confined animal feeding operations (CAFOs), the hormones end up in wastewater. Farmers often store the wastewater in lagoons and may use it to fertilize crops.

Federal laws regulate the flow of nutrients such as nitrogen and phosphorus from CAFOs to prevent excess nutrients from polluting rivers, streams, lakes or groundwater.

Environmental officials assume that such regulations also protect groundwater and surface waters from contamination with animal hormones and veterinary pharmaceuticals, but this has not been proven.

Hormone concentrations in livestock wastes are 100 to 1,000 times higher than those emitted from plants that treat human sewage, and large dairy farms are a primary source of estrogens in the environment, Zheng said. Recent studies have detected estrogenic hormones in soil and surrounding watersheds after dairy wastewater was sprayed on the land as fertilizer.

“These estrogens are present at levels that can affect the (reproductive functions of) aquatic animals,” Zheng said. Even low levels of estrogens can feminize animals that spend their lives in the water, causing male fish, for example, to have low sperm counts or to develop female characteristics (such as producing eggs), undermining their ability to reproduce.

Hormones that end up in surface or groundwater could contaminate sources of drinking water for humans, Zheng said.

“The estrogens may also be taken up by plants – a potential new route into the food chain” he said.

When exposed to the air, estrogenic hormones in animal waste tend to break down into harmless byproducts. But the hormones persist in anoxic conditions.

While conducting the new study on dairy waste lagoon water in the lab, the researchers were surprised at first to see levels of three primary estrogens (17 alpha-estradiol, 17 beta-estradiol and estrone) fall and then rise again in their samples. Further analysis revealed that the estradiols were being converted to estrone, undergoing the normal first step of biodegradation. But then the process reversed itself: Estrone was reverting to the alpha- and beta-estradiols.

“We call this a reverse transformation,” Zheng said. “It inhibits further degradation. Now we have a better idea of why (the estrogens) can persist in the environment.”

The fluctuating levels of estrone and estradiols may lead to detection errors, Zheng said, giving the impression that the total estrogen load of wastewater is decreasing when it is not.

“We need to develop a strategy to prevent these hormones from building up in the environment,” he said.