Al and Kathy Wulfekuhle of G&W Pork take a progressive approach to land management and biosecurity. 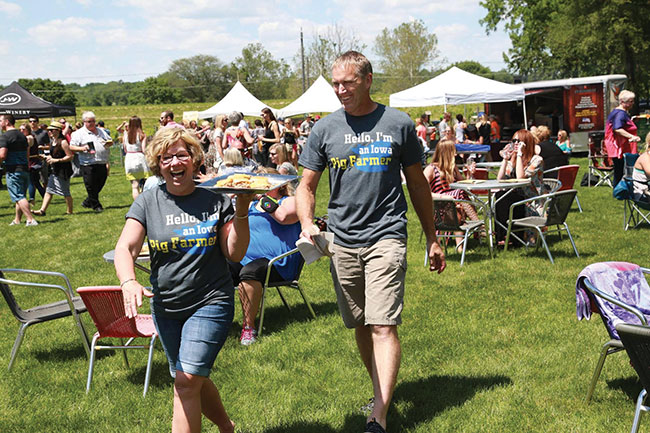 Kathy and Al Wulfekuhle have worked tirelessly for more than 40 years to promote pork – and healthy swine practices – in the area. All photos courtesy of Al & Kathy Wulfekuhle.

The story of G&W Pork, an operation in Quasqueton, IA, is in some ways the story of a marriage.

“We were high school sweethearts – homecoming sophomore year is when we started seeing each other. I was 19 and Kathy was 20 when we got married,” Al says. “I was trying to be efficient, so we got married on a Saturday, had a three-day honeymoon in Chicago and moved to the farm on Tuesday, and I had everything prepared so we could start farrowing baby pigs on Friday. She thought it was the dumbest thing ever.”

“He’s been paying for it for 42 years,” adds Kathy, laughing.

Over those 42 years, the business – and the family – has grown. Al and Kathy have three children, Allison, Brian and Brett, and eight grandchildren aged one to 13 years.

Last year, the Wulfekuhles were awarded the Wergen Good Farm Neighbor Award, an initiative from the Coalition to Support Iowa’s Farmers which recognizes livestock farmers with exceptional animal stewardship and environmental practices.

Nominees for the award must be active in their community, produce livestock to the highest of animal care standards, and be dedicated to conservation and stewardship of their land.

The Wulfekuhles tick all of those boxes.

On the stewardship side, they partner with neighbors Curt and Cindy Gentz to grow 800 acres of corn and soybeans that cycle back to the farm as pig feed via their on-farm feed mill. Over the years, they created waterways, field boundaries, terraces and wetlands on those acres, and implemented cover cropping no-till and for strip-till practices.

On the animal health side, they’ve invested in strict biosecurity measures to keep the pigs as safe as possible.

Al, who sits on state and national pork boards and is chair of the national swine disease council, says swine health is the biggest challenge facing the industry.

“Iowa has 25 million pigs and three million people,” he says. “The challenge is that whenever you have a disease, it can spread quickly and easily from site to site. A lot of my work on the state and national boards has been to keep animals healthy and keep foreign animal disease out of the U.S., and if it does get here, to stamp it out when it spreads.

“We’ve seen the need for epi-tracing for pork. We want to be able to do it better and quicker than we do it on the human side,” he adds.

Al remembers a time when they would bring baby pigs to their kids’ classrooms and welcome busloads of visitors to the farm who would walk from barn to barn without changing their shoes. These days, anyone going into a barn is required to shower and change clothes. The herd itself is “closed,” which means the Wulfekuhles raise their own F1 females using semen rather than bringing live pigs–who could potentially carry diseases–onto the farm.

Pork producers have an obvious responsibility to their animals and land, but Al Wulfekuhle believes neighborliness starts with the farm’s relationship with its employees.

“You have to want to help them get ahead in life and be successful,” he says.

All of G&W Pork’s employees are shareholders, and most own buildings they lease to the company.

“We made the decision a long time ago to give shares of our pig operation to employees and I think that pride of ownership and loyalty is key. We’ve tried to help all our employees to get into ownership. It’s been rewarding, because I’ve seen some of our employees start from nothing and do really well.” 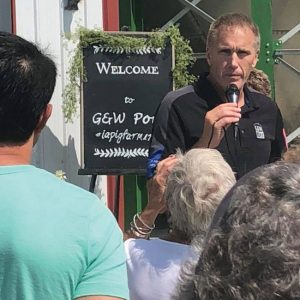 Al Wulfkuhle has used tours to teach the community about pork production. 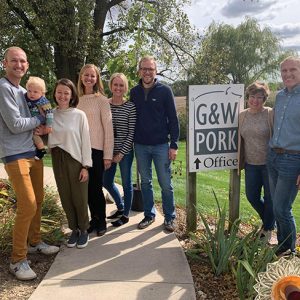 Al and Kathy Wulfekuhle used to engage the community by bringing young pigs to their children’s schools. While such practices no longer fly, G&W Pork still prides itself on having neighborly practices.

Progressive approach
The Wulfekuhles’ progressive approach to farming is not unique in their neighborhood. When Al and Kathy first started out, Al’s father helped him find a farm 32 miles from his own. Originally, the intention was to return to their home neighborhood, but before long the Winthrop area became home, and they never looked back.

These days, the Wulfekuhles’ neighbors, who are also independent producers, “follow each other a little bit,” says Al. “When one neighbor starts doing something, we all watch.

“For example, some neighbors have been strip tilling for five to seven years, but in the last couple of years, most everyone in the neighborhood has changed from tilling to strip tilling and using cover crops. It’s been an interesting transformation.”

When you’re a pig farmer, neighborliness means making a concerted effort to build hog barns away from homes; in Iowa, setback regulations require it.

But there’s a lot that farmers can do voluntarily. Al’s father was very conservation-minded, he says, and influenced Al and Kathy’s decision to add sustainable infrastructure – like the terraces and wetlands – early.

“The land is gently rolling here, so we have some long slopes and you need to have waterways and field borders to make sure you control erosion and runoff,” he says.

The Wulfekuhles have made an effort to ensure their farm operates as a closed loop system: the pigs eat the crops that grow on-site, and the pigs’ manure gets recycled back to the land as fertilizer.

“They do an excellent job for us, getting manure applied accurately and cleaning up around the sites when they’re done,” says Al. Everything gets knifed in with a minimal disturbance applicator.

The manure is tested before being applied at rates that comply with site specific management plans. In the past, the Wulfekuhles have used Corteva’s nitrogen calculator “Encirca” to attempt to monitor losses and only sidedress deficient areas. These days, they mostly rely on late spring N tests, says Al.

Iowa’s ongoing water quality problems have added to the pressure on the pork industry to prove to a listening public that their practices are sustainable.

Al’s advocacy and industry involvement often brings him face to face with anti-pork activists, but he believes the general public also wants to know how their meat is produced. This kind of scrutiny presents an opportunity for farmers to get creative with how they talk about their farms, but it isn’t always easy to be transparent when biosecurity measures limit farm access.

The Wulfekuhles have approached this problem by allowing visitors (as long as they’re willing to shower and change clothes before entering a barn) and offering video tours.

“We’ve always tried to be open with our farm and show people if they want to see it, as long as they follow our protocols,” he says.

The Wulfekuhle’s longtime veterinarian, Josh Bowden, has worked in the Winthrop area for 10 years, and he says disease control is particularly challenging in the area due to the density of pig barns. Even in closed herds, diseases like Porcine Reproductive and Respiratory Syndrome (PRRS) can still spread via aerosol transmission from neighboring operations.

“You can only control what you can control, and that comes down to how people move and the biosecurity steps they take,” says Bowden.

Bowden says the Wulfekuhels and their employees do a great job of animal husbandry. “They are very good managers and they have great people that are engaged in the process of raising pigs. We keep in very close contact with each other. We probably talk two or three times a week to hear about any issues they’re having in the sow or finishing barns,” he says.

For Al, watching pigs die of preventable diseases is one of the hardest parts of pig farming, and that’s why G&W places such an emphasis on pig health and welfare. Vaccinations help, he says, but the best approach is to keep animals as healthy as possible so they are better able to fight off infections.

“As producers we want to do everything we can to keep the animals comfortable, because the happier and healthier they are the better they produce for us. It’s in our best interests to take care of the animals,” he says.

Animal welfare and environmental stewardship are crucial elements of a healthy approach to pig farming. When it all works, Al Wulfekuhle says pig production is about as sustainable as it gets.

“When you grow corn and beans and feed them to the pigs, it’s the cycle of life. That’s part of what the consumer is asking for, and they’re asking for animal welfare as well. We want consumers to know we’re trying to do the right thing,” he says. •