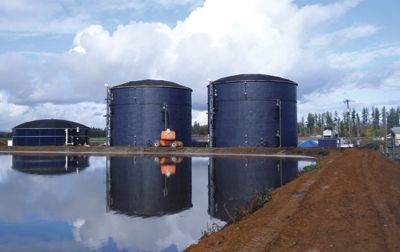 A dairy operation in Oregon is hoping low is the way to go as it adds a psychrophilic sequential batch reactor (SBR) anaerobic digester to its manure management regime. Contributed photo

A dairy operation in Oregon is hoping low is the way to go as it adds a psychrophilic sequential batch reactor (SBR) anaerobic digester to its manure management regime.

The technology, which is being provided by Bio-Terre Systems Inc. of Quebec, Canada, will utilize mixed flush and scrape manure from the 1,200-head dairy operation to feed two glass-lined steel tanks in sequential batches.

Psychrophilic anaerobic digestion relies on bacteria that work at temperatures between 5 and 28 C, with the optimum range being 20 to 25 C.

“These bacteria are known to be very robust,” explained Elise Villeneuve, an engineer with Bio-Terre Systems, as she presented a case study describing the project during the 2nd Annual Canadian Farm and Food Biogas Conference held in early 2010. “There are more families of bacteria present at work.”

Even with the large number of bacterial families, psychrophilic bacteria can take a longer time to degrade the material. In light of this, Bio-Terre went with a sequential batch approach using the two tanks.

“There is a cycle that is very short; in this case it’s a seven-day cycle,” said Villeneuve. “The first 3.5 days, one of the reactors is being fed the material and then is being put to rest. We don’t mix at all. We wait for the settling that occurs. By doing this, we’re able to retain those solids that are not yet treated. We keep them in the bottom (of the digester tanks) and then we let go what has been treated.

“We do that on purpose; we really want that sediment to build up.”

By doing this, Bio-Terre is able to artificially create a long retention time for the solids plus decrease the ratio of food to biomass so there is more biomass working at degrading. Through this method, they are able to get the maximum potential of biogas without creating a longer hydraulic retention time.

“For this project, we’re talking about an equivalent of 22 days’ hydraulic retention time,” said Villeneuve.

With the sequence batching and the sedimentation phase, biogas production in the Bio-Terre system occurs in curves, she said, adding that by having the two tanks in sequence, production becomes equal. Yet it can still vary.

“The biogas storage with our technology is important,” said Villeneuve. “The last thing these guys want is to flare.”

While most of the sediment in the bottom of the tanks does degrade over time, management of the tanks must be performed periodically, she said.

“We don’t mix for the process but we do have a system installed to put everything back in suspension just to make sure that over time it doesn’t build up.”

The Oregon system also includes a decant tank and a solids management area with a sloping screen and screw press.

“The decant tank was a little bit of a debate,” said Villeneuve. “We were not sure whether we should install one or not. It ended up being a yes, mainly because we wanted to ease the solid management for the bedding operation.

“We didn’t want to force the operation of that to be on the same timing of the effluent from the digester.”

While the system will be based at the Oregon dairy, it is owned and operated by Revolution Energy Solutions LLC (RES), a project developer for renewable energy projects, which has a long-term host site agreement with the dairy operator. RES, which focuses its renewable energy projects on concentrated animal feeding operations (CAFOs), currently has site control agreements with 100 other farms.

“They pay for everything,” said Villenueve. “The farmer doesn’t have to pay one cent.”

She added that the first criteria for the company is not to change the farmer’s life. “They want to enhance the manure management system but not to change it.”

As such, they look for technology that can easily fit into the farmer’s current manure management system, can be standardized, can be controlled remotely, and can be quickly constructed.

“These guys are looking at deploying 100 sites in the next six or seven years so they need to construct fast with the minimum vendors possible,” said Villeneuve.

RES hopes to produce about 150 kilowatt- hours of electricity from the Oregon project.

“There’s no feed-in tariff and it’s not on net metering,” said Villeneuve. “(The company) is just simply selling at a not very high price – around seven cents – back to the grid 100 percent of the electricity produced.”

She added that the company also hopes to recoup costs and generate revenue through state and federal tax credits on approved capital costs for the project, by trading Renewable Energy Certificates (REC) on the market, by selling greenhouse gas (GHG) credits, and by making solid fertilizer an important part of their model.