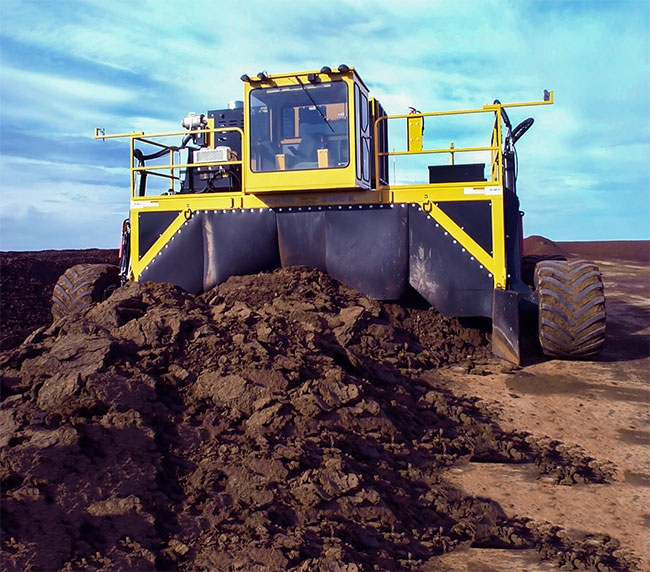 A 500 horsepower Caterpillar engine makes it possible for this Wildcat 718 compost turner to sift and turn raw feedlot manure into compost. Contributed photo

Texan Jack Moreman, owner of Rolling Plains Ag Compost, is proof positive that those who teach can also do. In fact, he has parlayed his extensive feedlot and manure management knowledge into a highly successful organic fertilizer and soil amendment business.

Moreman, a retired vocational agriculture teacher with an animal husbandry degree from Texas Tech University, began his career by managing a cattle feedlot. He then spent over 25 years teaching at Texas Christian University and Clarendon Community College, where he developed and taught a two-year program in ranch and feedlot management.

Six years ago, this 81-year-old launched a successful turnkey manure composting and organic fertilizer application business headquartered in Clarendon, Texas, that has since doubled in size with 15 employees. Clarendon is about 65 miles southeast of Amarillo.

The company’s motto is, “Giving nature a hand and conserving the land.”

“I feel very strongly about conserving our resources,” says Moreman. “I think composting is one of the better things that we do, and the area that we are in, you could have three different soil types in one field, from sandy loam, to dark clay, to caliche. Compost improves the soil structure and the ability for the carbon molecules to hold the nutrients in place till the plant can get hold of it.”

A group of eight feedlot owners, who together raise about 200,000 head of cattle, annually supply Moreman with the manure he needs to make compost. The company uses its compost turning equipment on land dedicated by each feedlot to convert over 720,000 tons of raw feedlot manure annually into about 300,000 tons of compost. It then sells the compost to farmers as organic fertilizer and a soil amendment, providing the equipment and personnel to land apply it for them.

Rolling Plains Ag Compost makes its money from the sale and application of the compost, with a percentage of that income paid to the feedlot owners for supplying the raw manure.

Moreman says that there are two main reasons why the feedlots are eager to work with Rolling Plains Ag Compost. Firstly, when the feedlot cleans its pens and stockpiles the manure, it typically is compacted in large chunks, which makes it very difficult to land apply. Its nutrient content is also highly variable in this form and it often is full of weed seeds. Because the raw manure is in larger chunks, it usually takes a couple of years to break down in the field, which is why farmers tend to not see any value from it until the second year after application. However, by providing the raw manure to a composter, the large chunks are broken down, it is easier to land apply, and the nutrients are available immediately upon incorporation. Also, farmers who have applied raw manure on their fields have found that this material tends to have unwanted debris like pipes and cables mixed in with it.

Secondly, working with a composter like Rolling Plains Ag Compost, reduces the feedlots’ potential liability concerning land applying of raw manure. Moreman says based on feedback from his feedlot suppliers, the decision to compost the manure rather than land apply it has made a big difference when it comes to dealing with organizations like the Environmental Protection Agency (EPA).

“Our feedlot operators tell us that if an inspector from the EPA or Texas Water Quality Board comes by and they see that they are composting that manure and hauling it out, the inspectors don’t ever bother them because that’s what they want to see done with it,” says Moreman. “But if the inspectors go in there and they have a huge pile that’s so big that it interferes with TV reception, then they get concerned.”

The composting processes gets rid of many of the pathogens and weed seeds in raw manure, and reduces the volume. Moreman says that it reduces the manure volume by as much as 5-to-1. So there is a lot less material to land apply and it tends to have more consistent nutrient content.

Because the feedlots feed their cattle concentrated rations, there is little, if any, roughage like hay or bedding material like straw mixed in with the manure, which actually makes it more valuable as a raw material for making compost because there is little to no filler.

“Dairy manure is probably worth about half as much as cattle feedlot manure because a dairy operation will typically feed a lot of hay and silage to their cattle,” says Moreman. “These beef cattle are on a high grain ration and they are not subjected to a lot of roughage, because these feedlot owners want their cattle to eat a lot of grain and convert that to beef. That’s kind of the name of the game.”

“We are either putting compost on cotton, peanuts, corn, wheat or irrigated pasture,” says Jack. “There is a crop coming off at all times, so they need compost pretty much all the time.”

While there is year-round demand, there are times of greater and lesser demand. May to July tends to be the slowest time of year, after spring crops are planted.

An important selling point to marketing the compost to farm customers is its ability to improve the water holding capacity of the soils where it is applied. Water is a valuable commodity to farmers in that part of Texas. Adding compost to dense soils increases their aeration and drainage capacity, and increases the water holding capacity of sandy soils. Most of Rolling Plains Ag Compost’s customers participate in a program where they
land-apply compost on each parcel of land on a two-to-three year rotation.

The company has worked hard to build its farm customer base, and Moreman’s background as an educator has helped. He spends considerable time hosting seminars and speaking to individual farmers about the benefits of using compost. His effort has paid off.

“You can be assured of one thing that if they try it, we are going to make a sale next time around,” says Moreman.

While compost has significant nutrient value, it does not necessarily fulfil all the farmer’s nutrient needs but represents only part of the overall puzzle. The company’s customers understand that. Most will need to add some commercial fertilizer, depending on the crop they are growing.

A 500 horsepower Caterpillar engine makes it possible for this Wildcat 718 compost turner to sift and turn raw feedlot manure into compost.

Typically, a feedlot will stockpile its raw manure as it cleans its pens and then Rolling Plains Ag Compost will bring in their own loaders and trucks to transport the manure to a drainage-controlled parcel of land that the feedlot has designated as its composting area. This can measure anywhere from 20 to 40 acres.

The company will create a compost windrow that measures approximately six-feet tall by up to 16-feet wide. The windrow will be as long as required by the amount of raw manure being converted. In the past, they have measured anywhere from a quarter-mile to a mile long.

The composting process consists of windrow turning, temperature measurement and moisture measure to ensure that the microorganisms responsible for the biological conversion process within the windrows are doing their job.

Part of the reason for the turning process is to ensure that the windrows are well oxygenated to support the microorganisms. As the conversion process takes place, the windrows can heat up to as much as 160 degrees Fahrenheit.

To turn the windrows, Rolling Plains Ag Compost uses a CT718 compost turner by Wildcat, which is a Vermeer company. With a 44-inch diameter drum to turn, mix and aerate the material, it can process up to 5,000 tons of manure per hour. The turning takes place typically once a week.

After about six weeks, the raw manure has been converted to compost and it is ready for land application. Moreman says the compost turner is a large and powerful piece of equipment with a 500 hp Caterpillar engine. He adds that it is sturdy enough to break down the chunks in the manure pile.

Rolling Plains Ag Compost has its own fleet of semi-trailer trucks to deliver the compost to farm customers. At all stages of the pen cleaning, composting, and land application process, the company depends on a large fleet of John Deere loaders to move the material as needed.

Once the compost is delivered to the farm, the compost is temporarily stockpiled beside the field and then loaded into New Leader spreaders to land apply the compost. Rolling Plains Ag Compost owns four of them. New Leader is a type of nutrient applicator manufactured by Highway Equipment Company (HECO) located in Cedar Rapids, Iowa. In the Rolling Plains Ag Compost operation, the applicators are mounted on either Chevrolet or International trucks.

Moreman says that these New Leader nutrient applicators are large and purpose-built. The box consists of a stainless steel bed with a conveyor on the bottom. The conveyor propels the compost to the back of the box, where spinners broadcast the material onto the land. The company will deploy as many nutrient applicators as needed for each job, but when all four are working, their customers are amazed at how quickly the job gets done.

“They are also very accurate,” says Jack. “There is a GPS unit on them to ensure that you don’t leave any part of the field out, and if you do, it will tell you.”

In terms of application amounts, Rolling Plains Ag Compost recommends four tons per acre on irrigated land and two-to-three tons on dry land. Once the farmer has some experience using the compost, they usually make adjustments on future applications based on the responses that they have experienced.