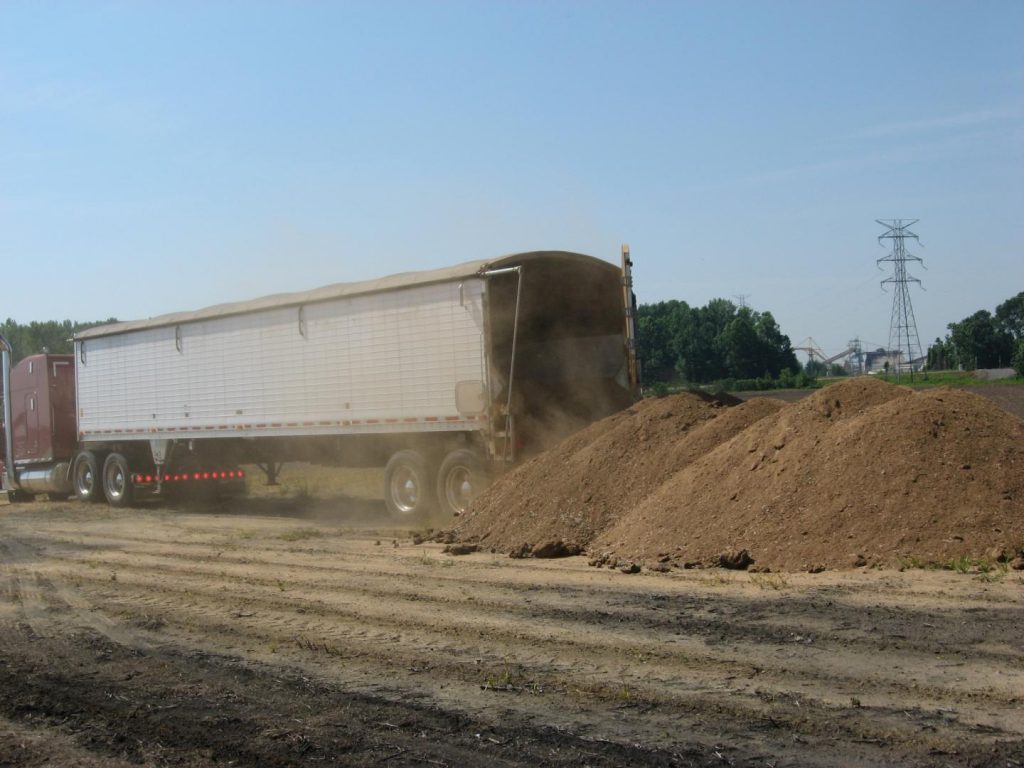 Raw broiler litter being unloaded at a research plot. This is the current mode of transportation of dry litter to farms in the region. A truck like this one delivers 25 to 30 tons of such litter. H. Tewolde

Each year, more than 14 million tons of chicken litter is generated in the U.S. Other poultry – such as turkeys, ducks, and geese – also contribute litter. Poultry litter is often recycled as manure by farmers. Studies have shown that using poultry litter to fertilize crops, such as cotton, can be as effective as using synthetic fertilizers.

In a new study, researchers at the U.S. Department of Agriculture’s Agricultural Research Service have calculated how much chicken litter farmers need to apply to cotton crops to maximize profits.

“Most research focuses on the amount of poultry litter needed to maximize crop yields,” says Haile Tewolde, lead author of the study. “We wanted to know if aiming for maximum yield always makes economic sense for farmers.”

Tewolde and his colleagues found that it doesn’t. Using less chicken litter than what was needed to maximize crop yields actually increased profits for farmers. Profits increased even though crop yields were lower.

It might appear that higher crop yields would lead to higher profits. But using more fertilizer also increases costs for farmers. The researchers predicted that once an optimal amount of fertilizer had been applied to crops, any more would raise costs more than profits.

The study was conducted in two farms in Mississippi. The researchers applied varying amounts of chicken litter as fertilizer on replicated farm plots. Then, they compared yield and profitability between the seven plots. They also compared the use of synthetic fertilizers and chicken litter.

They found that chicken litter applications over a certain level did not result in net economic gains. Instead, it led to economic losses even though yields were somewhat higher.

The researchers also confirmed studies that showed chicken litter to be as effective – sometimes more so – than synthetic fertilizers.

Poultry litter contains high levels of nitrogen, an important nutrient for plants. It also contains other minerals needed by crops, including phosphates and potash. Using poultry litter as manure also recycles a waste product and can benefit the environment.

However, using too much poultry litter can cause environmental pollution. Nitrogen and phosphorus in the poultry litter can dissolve in runoff from storms. These dissolved nutrients can pollute surface and ground waters. If farmers can use less poultry litter and still maximize profits, pollution can be managed more effectively.

“Ten to 15 years ago it was not common to use poultry litter as fertilizer for row crops such as cotton,” says Tewolde.

“This is the first comprehensive study looking at chicken litter use and profitability in commercial farms,” says Tewolde. “We are the first to identify ways to calculate optimal rates of applying chicken litter manure and maximize earnings at this scale of farming.”

One benefit of conducting the study on commercial fields is that “farmers can start applying our findings straightaway,” says Tewolde.

Though the study was conducted in Mississippi, it has wider implications.

“The approach we use to determine optimal rates of chicken litter application will be applicable in other cotton-growing areas around the country,” says Tewolde.

Tewolde’s research has been featured in Crop Science.