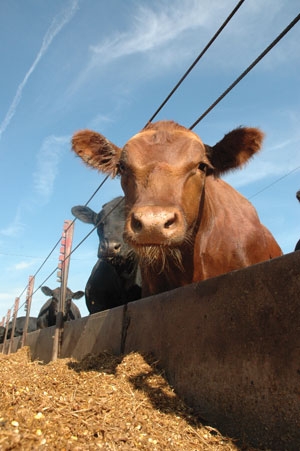 Couser Cattle Co. of Nevada, Iowa, is a multi-faceted operation that feeds and finishes 5,000 to 6,000 head of cattle a year and produces both corn and soybean seed.

Bill Couser is the owner of Couser Cattle Co., a multi-faceted operation that annually feeds and finishes 5,000 to 6,000 head of cattle, and produces both corn and soybean seed.

Couser says when you feed and finish that many head it’s the smell that people notice first, making your manure management a key piece of your business plan. Creativity is essential and he doesn’t let a little thing like “it’s never been done like that before” stand in his way.

For example, run-off from feedlots into water systems is an ongoing issue in Iowa. In 2002, Couser and a handful of other cattle producers came up with a novel idea. They would create vegetative treatment areas (VTAs) that would naturally filter run-off.

“We thought it was something that might work,” recalls Couser. “So, some engineers from Iowa State University and I and the IDNR (Iowa Department of Natural Resources) came up with a system.”

It’s simple in its design. The effluent runs off the feedlot into a cement settling basin. From there, the solids settle out. The remaining liquid is released to a VIB (vegetative infiltration basin), which is a series of tiles with grasses growing on top.

As the liquid passes through the VIB, it’s filtered naturally through grasses (brome and canary grasses) and approximately 50 percent of the nutrients are absorbed. The liquid is then picked up again by the tiles and pumped out to a VTA, where the balance of the nutrients is captured in another grassy area.
If the season allows it, the grass is harvested twice a year and fed back to the livestock. In essence, the filtration system becomes a renewable source.

“We have been in a testing phase for three years,” says Couser. “It was so successful that we were recently granted five-year permits.”

This system, as simple as it may seem, requires engineering up front because no two farms are alike. The elements – topography, soil, number of cattle, etc. – vary from farm to farm, requiring each VTA to be designed a little differently.

“Our feedlot was very challenging because it’s so flat here,” says Couser. “We had to move some dirt here and there to make sure the water ran in the right direction.

“And where we placed the VIBs, we had to dig them a little deeper and put tile in, making sure the tile went in the right place. To distribute the effluent evenly across the VTAs, we had to get some old irrigation pipe from Nebraska because we don’t irrigate here in Iowa. But we were able to make it work — and succeed.”

VTAs aren’t the only answer, he adds, but another alternative for producers. “Each producer needs to sit down with his engineer, look at the site and see if it’s feasible.”

And although the VTAs are cheaper than other systems to install, they aren’t maintenance free. “Any time you’re dealing with grasses, tiles and pumps, there is always something that has to be tweaked or fixed,” says Couser. “And there is also a certain amount of record keeping that needs to be kept so that you can stay within the guidelines of your permit.”

The VTA system made sense to Couser because he’s not an advocate of lagoons and large storage pits. “I live along a major highway and in a county where there isn’t a high population of cattle producers. I’m always looking for ways to blend in with the surrounding neighborhood and be accepted by the neighbors. Who wants a huge lagoon full of manure next to them?”

But the VTAs aren’t just neighbor friendly, they also work well with AFO (Animal Feeding Operations) under 1,000 head. And they are extremely economical. VTAs run anywhere from $100 to $200 a head, compared to a deep-bedded barn, which is $600 to $700 a head, or a slatted floor barn that can run $1,000 a head.

Because of the success of the VTA, the Iowa Cattlemen’s Association sponsored Couser Cattle Co. for an Environmental Stewardship Award. Couser Cattle not only won at the state level, but also at the regional level and will find out in February if it will win the national award.

“It’s very humbling to be on the stage with the other producers, like diversified cow/calf operations. We’re just a feedlot plunked down in the middle of Iowa. It’s pretty hard to make a feedlot look pretty when it’s wet,” he says with a smile.

This is hardly the first unique idea Couser has embraced. He’s driven to make a positive change in the Iowa ag industry.

In 2009, Couser partnered with Iowa DNR and Iowa State University and built a 1,000-head monoslope-style feeding building that directs rainfall away from a new pen without compromising the VTA system.

Couser also helped develop a 50-million-gallon local investor-owned ethanol plant in 2006 and was an advocate in Washington to help change legislation that allowed producers with deep-bedded barns to stockpile manure outside, like feedlots, rather than requiring them to store it under cover.

“It was costing hundreds of thousands of dollars to build the manure storage to hold something that’s solid,” says Couser. “Now we stockpile the manure in our cornfields for up to six months. When there’s a rain event, the run-off goes into the corn. The corn uses the fertilizer and it’s a win/win.”

Handling manure in a deep-bedded barn is a unique technology in itself.

Dry bedding is continually added to the center of the barn where the cattle lay. The cattle work the bedding toward the sides and twice a week three of the sides are scraped 10 feet in.

“We never completely clean the whole building out,” explains Couser. “We’re always cleaning the 10 feet around three sides. We keep adding bedding — corn stalks — in the center and the cattle continue to work the manure pack down. It’s no different than a hill.”

Couser likes that the manure is always consistent and not wet, like it would be if it had gone into a pit. And although there’s no breaking technology in spreading equipment, Couser does make good use of what’s available — such as GPS.

“It really helps in the wintertime. In Iowa, we can spread on frozen and snow-covered land. When you get a snow and you go back out to the field, a lot of times where you went last is covered and gone. So, you got out, poke the GPS in, see your last coordinate and ‘boom.’ You’re rolling.”

Because Couser Cattle is implementing many new ideas, it’s hosting one to four tours a week. “We’ve had tours from 49 different countries. And probably every state in the union,” Couser says.

This takes time, but Couser is an advocate of getting out there, talking and telling the story of the farmer. “When I give talks at a community level, we talk about feed, fuel food and fertilizer and how they all go together. And that we can do it all.

“We’re trying to get away from this negativity that develops. We try to do a good job and are wide open to anyone. We figure if people want to drive by and talk bad about the feedlot, let them come in and ask me the question first, and then you can make up your mind.”

Couser can’t do it all though, and says it’s important that producers get out in front of the media – the television cameras and the radio stations – and tell the story. “We can pay lobbyists to do all this stuff, but when the local producer gets up and tells this story, it brings credibility to everything, because he lives and breathes it. And that’s what his family is all about.”

It’s hard to imagine Couser ever retiring or resting on his laurels, in part because he still has some lofty goals, like someday being permitted for 5,000 head. He knows it will take technology that doesn’t yet exist, and he’s hatching new plans with his engineer friends.

“I really do have some interesting ideas (and maybe they’re crazy) when it comes to containing and spreading manure,” he says. “I’m looking at how we can incorporate manure like they do with the liquid manure today. Can we push that through a tube? How can we get that incorporated in a one-time pass?”

It’s not possible now, but Couser is working on the answer. He says look how far they’ve come in just the last couple of years. “We’ve gone from open lots, to mounds, to sheds, to VTA systems, to monoslope. And now we’re looking at slatted barns.

“I just love this industry. And it’s not the cattle, it’s the people,” he adds. “It’s been exciting and it’s been a fun journey. And we’ve got a great story to tell.”

Couser does have one ultimate goal though. “It’s the one where I never have to work again,” he says. “It’s to find something that takes the stink out of shit. Because no matter what you do, you’re always noticed by smell first.”

It’s an open challenge. “Bill Gates, knock yourself out!”