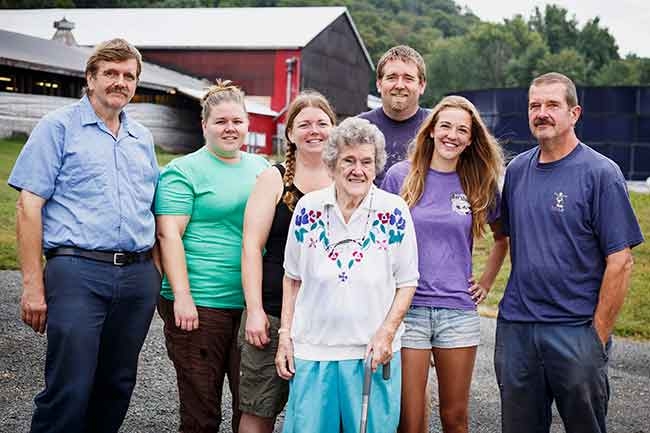 Dairy farms depend on the price of milk, but milk prices can fluctuate wildly. At present, milk prices in the New England area are about half of what they were two years ago. Sometimes, production costs can even exceed revenue.

To weather milk price fluctuations like this, Massachusetts-based Longview Farm has focused on reducing input costs and capturing more value from their manure as part of their sustainability plan.

The heart of their plan is an investment with Vanguard Renewables in the construction and operation of a 600,000-gallon capacity anaerobic digester to treat their manure. It processes about 9,125 tons of liquid manure annually.

The digester provides multiple benefits to the farm. One is production of biogas, which is collected from the digester and used as fuel to generate power. Massachusetts state regulations allow the power to be used directly on the farm, which it purchases from Vanguard Renewables at a fixed, discounted price. The excess generated amount is sold by Vanguard Renewables to the power grid without the need for a power purchase agreement with the local utility, although an interconnection services agreement was required. The farm’s biogas-fueled power generator produces about 6.8 million-kilowatt hours of electrical energy annually, but the dairy only consumes about 15 percent of the power produced.

The excess heat produced from the hot water that loops from the biogas-fueled engine to the digester is used to provide free heat to the dairy’s robot milker rooms, hot water tanks, and two houses on the farm.

Furthermore, the dairy farm has lowered its commercial fertilizer costs by using the treated, nutrient-rich, liquid effluent from the digester as organic fertilizer on their cropland. It produces anywhere from six to ten million gallons of liquid organic fertilizer annually.

Longview Farm is also paid rent from Vanguard Renewables for the land occupied on the farm by the digester and power installation.

A non-financial benefit derived from treating manure in this way but something that delivers a goodwill dividend with neighbors is a significant reduction in odor both from the on-farm lagoons and when the effluent is land applied.

Soon, the dairy will have the ability to accept more solid waste and separate out the treated solids from the digester’s liquid effluent outfeed. This will deliver a further cost savings to the farm, as it can be used safely as bedding in the dairy barns. The capital investment will also include adding a second, 500-kilowatt generator for more power production. Currently, the dairy has a 300-kilowatt power generator.

Located in Hadley, Mass., Longview Farm is a seven-generation family farm owned by Steven Barstow, David Barstow, and Steven Barstow II. The farm was founded in the early 1800s.

It is a 550-cow dairy located on 450 acres, consisting of two milking barns, two heifer barns, and a calf barn. It produces about 15,000 lbs of milk daily. They also grow alfalfa, hay and corn silage for feed.

“Our motivation for making this investment in the digester was really more to help sustain the farm than a manure management focus,” says Steven Barstow II. “The digester provides another source of income beyond the selling of milk and our retail store. Environmentally, it reduces our carbon footprint.”

The anaerobic digester was constructed in 2013 at a cost of $5.5 million, qualifying for about $750,000 in state and federal grants toward the construction.

Each barn on the farm has an automatic alley scraper that dumps manure into a gravity reception pit at the center of the barn. From there, it is piped using gravity to a 12,000 gallon underground holding tank, where a pump sends the liquid manure to the digester every 30 minutes. Previously, the liquid manure collected in this tank was pumped out daily to the dairy’s slurry storage lagoon. The only modifications required in the dairy’s manure management system prior to construction of the digester was installation of a reception pit in the heifer barns so that their manure could also be transported to the digester. This created the opportunity for more manure to be sent to the digester. Previously, this manure was composted. Also, a 100-foot long underground pipeline was installed from the holding tank to the digester.

Before installation of the digester, the dairy disposed of its manure through a custom manure application business, which land applied it in spring and fall.

“We still use the same equipment to land apply the digester effluent but now our hay fields get four applications a year instead of two,” says Barstow. “We’re seeing a better crop yield.”

John Hanselman, executive chairman of Vanguard Renewables, headquartered in Wellesley, Mass., says the Longview Farm digester project was the second completed by the company. Currently, it has several under construction and in the permitting stage in Massachusetts, Connecticut and New York.

The company operates using a unique business model where the purchasers of Vanguard Renewables’s technology take an ownership stake in the company equal to the company’s equity investors. That way, farm partners also benefit from revenue gained on future projects. Vanguard Renewables has left the door wide open on how its customers provide their equity stake. It can either be cash, goodwill or in kind contributions, like providing the land for the location of the digester or usage of on-farm infrastructure, like tanks. So Longview Farm is not only a Vanguard Renewables customer. It is part owner.

“What we saw in what had happened with some digester developers in Europe is that they had not partnered with the farmers,” says Hanselman. “They sort of came in almost like aliens landing on the farm. We learned that if the farmer isn’t both an owner and a willing participant in the process, the systems will never really function at full capacity.”

What reassured Longview Farm to want to become involved in the digester project is that Vanguard Renewables provided 100 percent of the upfront construction costs, and they already had a successfully working digester on another Massachusetts farm to prove that their technology works.

The dairy farm’s digester feedstock is a combination of dairy manure and about 14,000 tons of food waste. Hanselman says when partnering with dairies that have smaller herds, food waste is a critical aspect to the viability of an installation, as by adding food waste, they are able to generate about four times as much biogas compared to manure on its own. Securing consistent sources of food waste has been among the biggest ongoing challenges faced by the company, with staff constantly hunting for new sources. Longview Farm has once again played an important role in securing a major source of food waste for the digester through its member ownership stake in Agri-Mark Inc. who owns the Cabot Creamery Cooperative in Waitsfield, Vt. All the food waste from the Creamery is processed through the digester. The Creamery is also currently the sole customer for the excess power produced by Longview Farm.

Hanselman described this as a closed loop system, where the Creamery sends the farm its waste and in turn receives power from the conversion of that waste into biogas to fuel the farm’s power generator. The energy transmitted from the farm is then used to power the Creamery’s butter churns in West Springfield, Massachusetts. Additionally, the processed food waste becomes part of the nutrient-rich effluent that the farm uses as organic fertilizer to grow crops, to feed the cows, who produce the milk for the creamery.

“The digestate actually has significantly higher nutrient value, higher nitrogen content, and more available nitrogen because of the addition of the food waste,” says Hanselman. “That was an unforeseen benefit and it’s a lovely thing to have seen and now documented with the United States Department of Agriculture.”

To take the closed loop concept even further, some of the creamery’s customers, like Geissler’s Supermarket are also food waste suppliers to the Longview Farm digester.

Hanselman says that the dairy has benefited greatly by working with Vanguard Renewables rather than going it alone, because of the company’s ability to finance the project and provide the logistics and technical expertise to build and operate a highly efficient green power facility.

“I think the greatest fallacy in anaerobic digestion is that it doesn’t require dedicated and professional management,” says Hanselman. “We were able to convince the Barstows that it would work significantly better if we had third-party capital that would pay for the project, and that we would staff it with trained personnel, with support from biologists and chemists and all the staff that we have at Vanguard Renewables.”

Casella Organics, with experience in managing biogas-powered production facilities, has been hired to operate the digester on a day-to-day basis.

Addressing the sustainability challenges of New England dairy farms, Hanselman says area dairies tend to be ‘much smaller’ than other parts of the country, with a 3000-head farm considered a big farm. That’s because there is sparse land available for growth. So the only alternative to remain viable in some cases is to lower input costs, which Longview Farm has done.

Also, by taking the digester route, Longview Farm has anticipated potential future regulatory changes related to stricter nutrient management, over concerns of how farm nutrients might be impacting groundwater.

By-products such as the excess heat generated by the system also provides farmers with opportunities to look at other business ventures to improve their bottom line.

“In the next system that we are building now, the farmer is building a greenhouse, which will be 100 percent heated by waste heat from our generator,” says Hanselman.