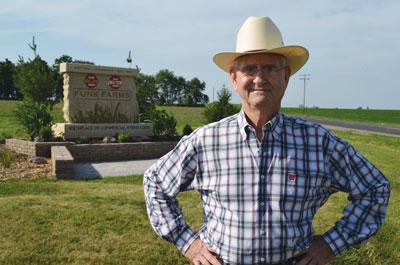 The Funk family farm in central Illinois was established in 1824, a mere 48 years after the signing of the American Declaration of Independence. The land continues in agricultural production today with a feedlot and cropping operation owned by the founder’s descendants and the farmland’s productive integrity is being maintained by a strong commitment to environmental stewardship.

For example, the 7,000 to 8,000 tons of cattle manure generated by the farm’s feedlot is converted to compost and land applied to the farm’s 2,000 acres of corn and soybean crops and 300 acres of pasture. This practice, started about eight years ago, delivers both an environmental and a financial dividend by reducing the volume of manure when it is composted by about 50 percent and by providing an organic alternative to commercial fertilizer, which saves the farm about $40 to $50 net per acre.

While the cropland benefits from the composted cattle manure, it returns the favor by providing corn stalks and soybean stubble for cattle bedding, which becomes the manure that is converted into compost. The farm has about 10 acres set aside for its composting operation.

There are three creeks that run through the Funk Farms Trust property. The farm has been careful to establish fenced buffers around the creeks to minimize the impact that cattle constantly grazing adjacent to the creeks could have.

For its efforts, the farm was chosen as a finalist in the 2012 National Cattlemen’s Beef Association Environmental Stewardship Program. The farm has also had a major impact on the agriculture industry as a whole as this is where the first varieties of hybrid seed corn were developed.

The farm, which is a trust managed by a board of trustees consisting of four members from various branches of the Funk family, was at a crossroads in 2010. Farm manager Dan Koons is responsible for the day-to-day management of the farm and he has held that position since 1970. Brian Bangert, crops manager, and Adam Green, cattle manager, are responsible for the day-to-day operations of the composting and manure management system. Koons says it came to a point where the feedlot had to expand or the farm had to get out of that business. The management board chose to expand and also to branch out into custom livestock feeding in addition to raising its own herd. What aided in their decision was an opportunity to custom feed Holstein cattle, which reduced the risk to the farm because they were essentially being paid to raise cattle owned by someone else. Today their herd is about two-thirds custom-fed and one-third Funk farm cattle. Koons says that decision brought the herd back to about the size it was when it was established.

The board’s decision to expand included a decision to upgrade the farm’s buildings and invest in a new barn with a monoslope roof designed by FBi Buildings. The barn was custom-designed for good airflow, better control of runoff and easy management of the bedding pack and manure in each of the six pens. In terms of manure management, the only significant difference with the new facility is that the manure is stored indoors rather than outdoors prior to regular removal. It does provide the farm with a covered, short-term storage option in the event that weather makes it difficult to remove and apply the manure to cropland. The barn’s major benefit to the farm is that the airflow through the structure has created a healthier environment for the cattle, and Koons says that is having a positive impact on the conversion ratio. At full capacity, the barn can house about 900 head. Cattle graze on pasture grass in the summer and are housed and fed at the feedlot through the winter.

About once a week, the farm moves the cattle from each pen to a staging area outside the barn and uses a skid steer to scrape refuse from the apron around the feeding bunks as well as the manure from the pens into three manure bays, manufactured from large concrete blocks. The bays measure 12 to 16 feet wide and span the entire length of the barn for a distance of about 75 feet. A bedding pack is maintained in each pen, and once each pen is cleaned, fresh bedding material is added as needed.

“On average, we can clean those aprons and pens three to four times before we have to empty the storage manure bays and haul that out to the compost site,” says Koons. “It’s a little more labor as compared to a slatted floor where you have deep pit confinement, but our initial cost was much less in this sort of system where you are using a bedding pack.”

The collection of the manure for composting and compost manufacture does not occur year round. During the winter, the manure from the feedlot barn is place directly on the cropland. As the farm begins to prepare cropland for spring tillage, which typically occurs from March 1 to 15, it will start to accumulate the manure at its compost site. Compost manufacture occurs from the beginning of March to the end of September.

The manure is placed in windrows measuring approximately eight to 10 feet wide, and five to six feet high.

The decision to compost is part of the farm’s Concentrated Nutrient Management Plan for its feedlot that determines the amount of manure it can apply to the farmland. It didn’t require the purchase of a lot more equipment as they already had the skid steer and dry manure spreader.

“The only thing we needed in addition to that was the compost turner,” says Koons.

The farm purchased a compost turner manufactured by an Illinois-based company called Midwest Bio-Systems, which cost in the range of $35,000 to $40,000. Under normal conditions, it takes about 120 days to make compost from the manure.

The compost site is about a quarter mile from the barn, and Koons adds they had to be careful where they established the site because of concerns about runoff. It had to be a minimum of 200 feet from a stream, and the farm has established a grass buffer between the compost heap and the nearest watercourse.

In terms of the nutrients within the compost, the Funk farm has its manure and compost laboratory tested at least once a year for its nutrient value.

“In this Concentrated Nutrient Management Plan, there are limits as to how much phosphorus, nitrogen and so forth you can apply per acre based on soil tests from our cropland,” says Koons. “It’s well monitored in terms of the quantity of compost that we can put on.”

“One of the things that cattle and swine feeders haven’t done in the past is that we’ve thought that manure was a by-product and just hauled it to the closest field from the barn just to get rid of it,” says Koons. “In the last few years, with input costs rising so dramatically especially for corn, we’re now placing a really fair market value on that manure that we didn’t used to.”

Koons and staff start to spread the compost on its cropland just as soon as the crops are harvested, which is typically around the middle of September, and will continue to apply it until the supply is exhausted, at which point they will switch to applying raw manure from the barn.

Koons says that composting is still not a particularly widespread practice among cattle feeders in that part of the United States, but interest and implementation is growing.

“I would guess that less than 10 percent are using the compost system but I think it is a concept worth pursuing for several reasons, one being the environmental concerns and the environmental rules and regulations we have to follow,” he says. “It’s probably going to be something that is going to be done a little more in future.”

Because of the number of creeks running through the Funk Family Trust property, minimizing runoff and maintaining good water quality in the midst of a large farm operation is both a concern and a challenge for the owners. Given their conscientious approach to minimizing their environmental impact, for example, having very wide setbacks from the creeks as compared to many other farm operations, Koons says, they have seen a positive result.

“I can recall not only here in Illinois, but in Iowa, Minnesota, and other states, where you’d have a feedlot right on a creek and it would be just one big mud bath,” says Koons, “but it was a source of water. Environmental rules and regulations changed all that and I think we became more aware of the environment.”

He adds that he has definitely seen an improvement in the water quality in the creeks traversing through the farm over the years, and part of the reason is how they have modified their grazing operation, using an intensive management grazing approach where they rotate the cattle through grazing cells every three days.

“In one instance, we have cattle completely fenced out except for flash grazing for a day or two,” says Koons.

The farm has a long history of having an open-door policy and a strong willingness to share its ideas on farm management, as well as involvement in many boards and associations advocating for the industry.