An Iowa State University research project will study the impact of poultry manure and cover crops on water quality and soil health.

Chickens in Iowa may have a part to play in restoring the oxygen-deprived waters of the Gulf of Mexico. Research out of Iowa State University suggests that integrating poultry manure into agricultural management plans has a positive effect on water quality while also producing healthier soil and higher crop yields.

A 20-year research project that began in 1998 found that using poultry manure in agricultural management plans led to improved soybean yields and more particulate organic matter in soil, as well as lower nitrate levels compared to commercial fertilizers like UAN (urea ammonium nitrate) in drainage water. These findings pointed to new and profitable uses for a sometimes-overlooked agricultural product.

“When the study began, (poultry) manure was viewed as more of a waste product, and some of the treatments (in the study) really reflected that. One of the treatments was essentially twice the recommended manure application rate,” Soupir says. “So it’s been really interesting to see over time how our thoughts about manure management have changed.”

In collaboration with the Iowa Soybean Association’s Research Centre for Farming Innovation, Soupir’s team will broaden the scope of the original study over the next six years. Researchers will test different nitrogen management strategies, including manure application timing and fertilizer mix, use of reduced or strip tillage and use of cover crops, working on 27 half-acre plots at the university’s research farm near Ames, IA. They will track corn and soybean yields while analyzing environmental data from soil and drainage water samples to further understand the benefits of increasing the use of poultry manure in grain farming.

The study includes nine different fertilizer and cover crop treatments that will be applied to the tile-drained plots, which are separated by tile barriers to prevent cross-contamination of the drainage samples. Some plots will only receive chemical fertilizer as a control, while others will be treated with either poultry manure or a combination of poultry manure and commercial fertilizer.

“Each treatment will be applied in triplicate to ensure reproducibility and statistical power,” the project proposal reads.

Soupir says the research to date does not suggest farmers replace commercial fertilizer with poultry manure altogether, but rather consider a combination of the two that promotes environmental resilience while ensuring soils retain the necessary nutrient balance. The new project builds on lessons from the 20-year study, such as reducing how much phosphorus-rich poultry manure is employed. Some plots may only receive manure every few years, with UAN providing a nitrogen top-up.

“We’re looking at it from the perspective of only applying the amount of poultry manure that’s beneficial for crop growth. And we want to try to prevent the buildup of any extra phosphorus in the soil,” Soupir says. “Soil health is something that everyone’s on board with.”

Since poultry manure is a solid, it can be tilled in during the spring with UAN, or applied in the fall and either lightly tilled or left on the surface. Soupir notes that using solid manure adds carbon to the soil and reduces the runoff of nutrients like nitrogen – which contributes to oxygen-deprived oceanic “dead zones” – and phosphorus, a major cause of algal blooms in freshwater.

“We have to worry about both – phosphorus locally and then nitrogen more downstream,” she says.

Poultry manure helps soil retain water by increasing particulate organic matter, which boosts resilience against erosion, drought, and other extreme effects of climate change. Reducing erosion is a particular boon to farmers, since nutrients like nitrogen remain in the soil for the next growing season, rather than being pushed into drain lines and eventually swept out to sea.

“There’s a big emphasis on water quality here in Iowa related to the dead zone in the Gulf of Mexico,” Soupir says. “We have been able to show some lower nitrate levels in the drainage water when we do manage the manure properly. That’s really good news.”

Michelle Soupir (left) and the team of Iowa State University researchers in the department of agricultural and biosystems engineering involved in the long-term study on the impacts of fertilizing cropland with poultry manure. The team included (from left) research associates Ji Yeow Law, Leigh Ann Long and Natasha Hoover, along with agriculture and life sciences professor Rameshwar Kanwar, who initiated the 20-year project.

To further combat soil erosion, the next phase of the research project will integrate winter cereal rye as a cover crop to keep “living roots” in the soil to store nutrients and reduce surface runoff. Researchers will monitor yields to see if the use of cover crops has any effect.

The project uses poultry manure since there is no shortage of it in Iowa, a state that produces one out of every six eggs in the United States.

“Eggs are on trend,” says Kevin Stiles, CEO and executive director of the Iowa Poultry Association and Iowa Egg Council. “Egg consumption continues to grow. All the research is pointing towards the favorable benefits of eggs in the diet.”

Stiles says before the pandemic, there were 58 million laying hens in Iowa, the top egg-producing state in the country. That number has decreased as food service sales slumped thanks to COVID-19, but Stiles expects a rebound and “continued strong growth” in egg consumption going forward.

The egg council will provide $67,000 in annual funding to the new study after being the principal backer of the initial research project. “We are excited. To our knowledge, this is the first and only study of its kind,” Stiles says. “We certainly value the partnership that we have with Iowa State and really are proud of the research team that they have there to do this kind of work.”

Stiles credits board members for their foresight in funding the research. “I think what we’ve learned since then, and the way it’s valued today, certainly has even enhanced that image and has made poultry manure a more desired product than it was even 20 years ago,” he says.

Using poultry manure in agriculture isn’t a new idea, but Stiles hopes that quantifying its nutritional and environmental benefits will expand the market for a product that Iowa’s poultry farmers can supply in abundance.

“If we can demonstrate that value in the contribution that it makes to enhancing the soil and the soil quality, I think that’s only advantageous to our farmers,” he says, adding that poultry association members are also keen to see if manure produced by chickens who live cage-free behaves differently than that from chickens raised in conventional housing.

Soupir says farmers are embracing the idea of using poultry manure in their fields, with some adding it to sandy soil to build up the organic matter. “There’s been pretty positive reception by the farm community,” she says. “That’s why poultry manure can be bagged and sold, because there’s enough demand for it. This is something that’s really changed.”

A set of best management practices for poultry manure should come out of the first few years of the study, which will allow farmers to lean on the findings of the Iowa State University team rather than having to reinvent the wheel. 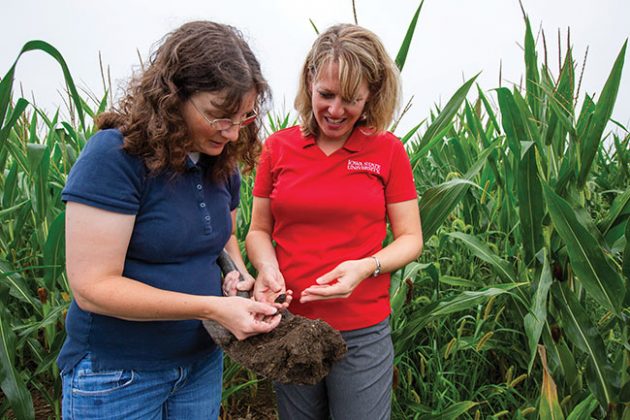 “A lot of farms aren’t measuring their soil health,” Soupir says. “They will measure their soil nutrient levels so they know how much [fertilizer] to apply. They also don’t do a lot of water quality monitoring. I mean, there’s more being done across the state than there probably ever has been. But it’s definitely not common for a local landowner to measure the nitrate levels in their drain lines on a weekly basis like we will.”

Part of the educational component of the research will be convincing farmers not to add extra nitrogen fertilizer on top of poultry manure “just to be sure,” because the original study found that doing so reverses the soil health and water quality benefits, as well the economic gains.

“We know it happens,” Soupir says, adding that farmers need to “trust the process.”

Researchers will test out management plans that incorporate poultry manure every couple of years, or supplement with UANs in the spring so that phosphorus doesn’t build up in the soil. “I think some of those approaches could be pretty popular with farmers, because then they have the insurance of the commercial fertilizer if they feel they really need it,” Soupir says.

Last year saw the Iowa State team survey the new research site’s 27 plots and locate existing drainage tiles that will serve as barriers to “hydraulically isolate each of the plots,” Soupir says. Team members also did “really extensive soil sampling [to] get information on the baseline condition of each of the plots.” In the spring, the group will install additional drainage tile to each plot for sample collection and analysis through the fall.

“The long-term outcome of this study would be to inform manure management and cover cropping management to optimize crop yield and environmental benefits,” Soupir wrote in the proposal. “Our hope is that these efforts will lead to fewer impaired waters, protected public health and more sustainable agricultural systems.”

Stiles says it is “really helpful” to the industry to now have “more than 20 years of validated research to substantiate the value of poultry manure.” Soupir notes appreciatively that it was rare for a commodity group to fund a long-term study, and says she is excited that research into how best to apply poultry manure on Iowa’s farms will continue.

She expects it will take the full length of the current six-year study before researchers see appreciable changes in soil health and crop yields. Improvements in water quality should register more quickly.

“The vision is that we can do at least six years of these management strategies, and then probably revisit these treatments and see if we want to update,” she says. “As we’ve seen, things have changed as far as how we’re doing things and what questions we want to answer.” •