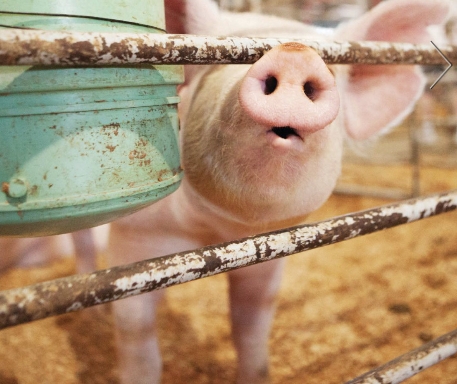 I was recently reminded of the famous poem by Martin Niemoller, a German Lutheran pastor; you probably know the one – First they came … It’s on display at the U.S. Holocaust Memorial Museum and pops up in the press when injustice or persecution is the topic at hand.

What brought it to mind was an article in the Daily News, a newspaper based in Jacksonville, NC. The topic? Hog farm nuisance lawsuits.

“Once they’re done with the hog industry, what’s next?” the store clerk asked reporter Mike McHugh. “Next, they’ll be coming for the turkey and chicken farmers.”

The plight of North Carolina hog farmers has been on my mind for the past few months. Last issue [May/June – The war against animal agriculture], I discussed the fallout of a million dollar lawsuit against Smithfield Foods. It was just the first in a long string of lawsuits – 89 involving 500 plaintiffs – filed in the state.

Currently, lawsuit number two is underway in Raleigh. It was brought by a couple living about a quarter-mile from a 4,700-head hog farm in Duplin County who argue the operation is interfering in the enjoyment of their property. What’s interesting is the husband bought the property from the farmer he’s complaining about – they went to high school together – and there were hogs on the property at the time. As well, many other neighbors of the farm have no issue with odor, including the local mail delivery person who drives by the operation almost every day.

According to North Carolina Pork Council CEO Andy Curliss, who has been attending the trial and blogging about it extensively, it’s all about
the money.

“Make no mistake, the lawyer wants money from Smithfield Foods,” he stated in his blog, posted on the NCPC’s website [ncpork.org]. “In the lawsuit, he expressly dismissed asking the jury or judge to order any fixes to the Joey Carter farm. In legal mumbo jumbo, going for a fix is known as seeking ‘injunctive relief.’ And that’s what you’d expect in a nuisance case. The lawyer isn’t going for that. He just wants money.”

North Carolina law already limits how much money plaintiffs can receive from a lawsuit. But state lawmakers are still concerned about the damage multiple lawsuits could have on the industry, which is an important revenue generator and employer. A farm bill placing limits on how and when a neighbor can sue a farm operation was recently passed in the state legislature, despite being initially vetoed by Governor Roy Cooper. He argued that while agriculture is important to North Carolina’s economy, “property rights are vital to people’s homes and other businesses.

“Giving one industry special treatment at the expense of its neighbor is unfair.”

Unfair? So is attacking your neighbor legally in hopes of winning a big monetary windfall. Or suing a business into bankruptcy, which ultimately leads to unemployment for your other neighbors.

Bottom line – North Carolina’s hog industry is one of the most heavily regulated in the state. If those ones aren’t good enough, make new ones.

Until then, who knows what or who is next.