Persistence pays off for Kinnard Farms as the Wisconsin operation works to streamline recycling of its manure-laden sand bedding. 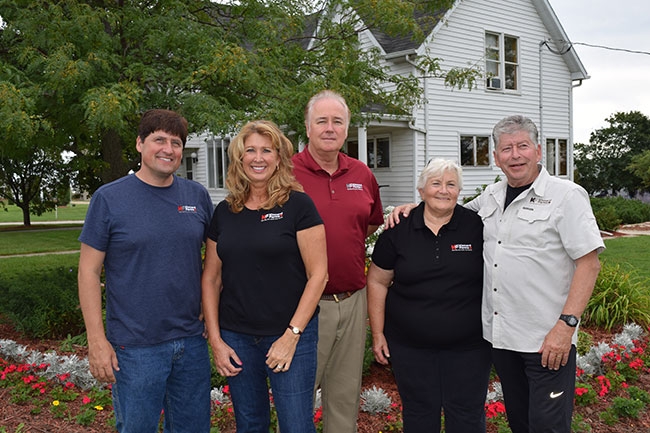 One back surgery and 30 years later, Lee Kinnard, co-owner of Kinnard Farms in Wisconsin, is starting to believe that the dairy has finally put all the pieces in place to streamline recycling of manure-laden bedding sand from their barns.

The benefits of using sand bedding were just too good to ignore, with a 50 percent milk production increase nearly overnight when the dairy began using sand bedding in 1986. That was the good news. The bad news was how little technology existed in those early days of sand bedding usage in how to manage and recycle the manure-laden sand.

“I can tell you exactly when we switched to sand bedding because my back surgery was about 12 months to the day later,” says Lee, demonstrating just how challenging the job of moving the sand was in those early adoption days. “It has been a love-hate relationship with sand ever since we switched . . . initially we were filling stalls by
hand with sand.”

Having the ability to recycle the sand became critical for the 7,500 head dairy, considering their need for about 150,000 tons of sand annually for bedding while generating about 70 million gallons of liquid manure. The right quality sand was becoming harder and harder to find within a reasonable distance, so something had to be done on the nutrient washing and sand recycling end.

Speaking to Kinnard, there is a sense that his feelings toward sand bedding in the dairy and working toward a feasible system of effectively washing nutrients from the sand and recycling it has been a bit of a personal quest he intends to win. Today, he feels like maybe he has and in some instances, the solutions were incredibly simple.

For example, there was the issue of water consumption when washing the nutrients from the sand with clean water. It turns out that the dairy was flushing water from their cattle waterers every 48 hours. In their new barn alone, there are 102 waterers representing 10,000 gallons of water. Instead of simply flushing that water, the Kinnards devised a system when their new barn was built of routing that water to their sand recycling system, using it to flush the sand before this water enters the wastewater stream. It has worked remarkably well, cleaning the sand to a reusable state while significantly reducing odor.

Kinnard Farms, located east of Green Bay near Casco, Wisc., has been described as both an early adopter and innovator in their nutrient management and crop management practices. Owned by Lee, his brother, Rod, and his wife, Maureen, while his sister, Jackie, and her husband, David Stewart, are dairy employees, they have 6,500 acres under cultivation with another 3,000 acres of forage grown by neighbors to support the dairy, some of whom have retired from the dairy business, but still grow feed to support the Kinnards.

Started by Lee’s parents, Alvin and Milly, the current herd is an offshoot of the initial 14 cows on 80 acres they started out with in 1948. With the dairy’s most recent expansion, cows have been added from other herds.

The dairy has enough capacity to store up to two year’s worth of liquid manure, but is on a regular schedule of land applying about one-third in the spring, another third in the summer, and the final third in the fall for a total of about 60 application days. Along with no-till and minimum-till farm practices, Kinnard Farms uses satellite imagery to test and geo-reference fields, and then uses this information to precisely apply fertilizer to their crops. Liquid manure provides about 50 percent of their fertilizer needs, with a preference for shallow injection. No-till and cover cropping practices, which the Kinnards have been using for more than 25 years, help to keep nutrients in the soil. They sell some of their liquid manure to local vegetable growers, which helps them to coordinate nutrient application on their own land.

Kinnard Farms contracts liquid manure application to local businessman, Jesse Dvorachek. Unlike areas where crops are under cultivation right near the farm, the Wisconsin dairy’s cropland is as far as 31 miles away. Only about seven percent is applied directly from the lagoon with a drag hose system. Most is hauled by truck to a ditch catch and pump system where a tractor-propelled drag hose system takes over to land apply the liquid manure. Trucks never leave the road. On certain days, Lee says that there can be as many as 28 tanker trucks on the road delivering liquid manure to fields. While Dvorachek owns three tanker trucks, the rest come from other truck and tanker owners who are often local farmers. Again, this helps to support the local economy.

Speaking of the dairy’s history with sand bedding, Lee says that the issue was that their circa 1950s free stall barns, manure pumps and manure pits simply weren’t set up for moving and recycling sand. It was a constant battle.

“We stuck with it because it was so good for the cows,” says Lee.

So being innovators and early adopters, they began traveling the world looking for solutions, but found few sand handling solutions.

While Kinnard Farms was installing its fifth sand bedding system in 2005, it was already in discussions with technology developers about all the moving parts that they would require in what is their current sand recycling system. The first iteration and prototype was installed on their home farm in 2012.

“It’s really just this last system that we have been running on our home farm for the past five years, which is kind of our prototype, and the other one on the new farm for two years, where we have really made some great strides in 100 percent reusable sand,” says Lee.

Three issues that the new system solves are water consumption, recycled sand quality, and odor. Previous systems were designed so that water was recycled through the flush flume and lagoon system to flush and settle out the manure-laden sand. That proved difficult in Wisconsin’s four-season climate, resulting in highly variable recycled sand quality.

“We really wanted a closed-loop system so that we weren’t reliant on water coming off of the lagoons,” says Lee.

Also, the dairy opted for Summit-brand industrial pumps commonly used in the pulp and paper industry, which actually turned out to be more durable and less expensive. The issue Kinnard Farms discovered is that the previous agriculture pumps they were using just weren’t designed for 24-7, seven-day-a-week service.

The first step in the Kinnard Farms manure management and sand recycling system is to scrape the manure laden sand three times a day with a skid steer into one of three cross flumes in the new 1,700 foot long and 450 foot wide barn, using recycled water and gravity to pump the material through a two-pipe system to the sand recycling center about a half mile way. It sits at about a 25-foot lower elevation than the barn.

The sand recycling center is a dedicated, climate controlled building. The manure-laden sand stream is dumped into a six-foot wide, six-foot deep channel that contains two submersed, mechanical, heavy-duty McLanahan augers. The augers operate full time with water flowing across the augers as they transport the settled out sand about 130 feet to the middle of the building. Mini-sand lanes on the sides of the augers collect about five percent of the sand that filters out of the moving augers, and this is shoveled back using a payloader into the moving augers about once every eight hours. The augers transport the sand to a submerged McLanahan screw mechanism, which picks up the sand and transports it to floor-level washers. It’s at this point that the fresh water from the waterers is used to wash the sand clean.

“The sand at this point is probably about seven to 10 percent organics,” says Lee “It’s dirty, dark and by no means suitable to be put back under the cows. When it hits the washers, we are running a continuous second loop of water. That is actually what polishes and gets all the organics out of the sand, and gets us down to that one percent or better organics in the sand.”

Farmers and environmental groups have taken notice of the effort and investment that the Kinnards have put into good land stewardship and technological advancement over the past several decades. The dairy was recently recognized with the 2017 U.S. Dairy Sustainability Award.