March 4, 2009 – It is an unlikely application, but researchers in China
have discovered that chicken manure can be used to biodegrade crude oil
in contaminated soil.

March 4, 2009 – It is an unlikely application, but researchers in China have discovered that chicken manure can be used to biodegrade crude oil in contaminated soil. 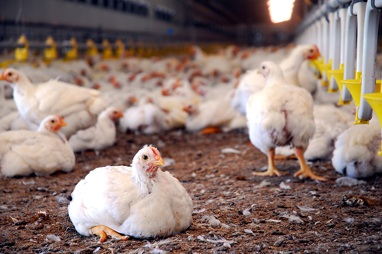 Writing in the International Journal of Environment and Pollution, the team explains how bacteria in chicken manure break down 50 percent more crude oil than soil lacking the guano.

Bello Yakubu, Huiwen Ma, and ChuYu Zhang of Wuhan University, China, point out that contamination of soil by crude oil occurs around the world because of equipment failure, natural disasters, deliberate acts, and human error. However, conventional approaches to cleanup come with additional environmental costs. Detergents, for instance, become pollutants themselves and can persist in the environment long after any remediation exercise is complete.

A more environmentally benign approach is bioremediation, which uses natural or engineered microbes that can metabolize the organic components of crude oil. Stimulating such microbial degradation in contaminated soil often involves the use of expensive fertilizers containing nitrogen and phosphorus, and again may come with an additional environmental price tag despite the bio label. Soil hardening and a loss of soil quality often accompany this approach.

Ma and colleagues suggest that animal waste, and in particular chicken manure, may provide the necessary chemical and microbial initiators to trigger biodegradation of crude oil if applied to contaminated soil. One important factor is that chicken manure raises the pH of soil to the range 6.3 to 7.4, which is optimal for the growth of known oil-utilizing bacteria.

In tests, the team added chicken manure to soil contaminated with 10 percent volume to weight of crude to soil. They found that almost 75 percent of the oil was broken down in soil with the fowl additive after about two weeks whereas additive-free soil was naturally remediated to just over 50 percent.

The team carried out a microbial analysis of their samples and identified 21 different microbial species known as aerobic heterotrophs. The team explains that Bacillus species and Pseudomonas aeruginosa were the best oil-munching microbes. Of the 21 isolates, 12 were capable of metabolizing components of crude oil. Other microbes included Proteus, Enterobacter, and Micrococcus species. Bacillus represented the most prevalent species.

“The use of chicken manure to stimulate crude oil biodegradation in the soil could be one of the several sought-after environmentally friendly ways of abating petroleum hydrocarbon pollution in the natural ecosystem,” the team concludes.