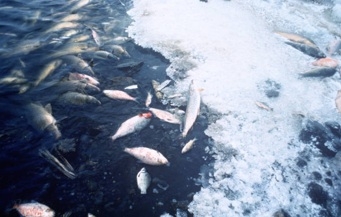 September 27, 2013, Des Moines, IA – Four fish kills in one month is a good reminder to pay attention during fall manure and fertilizer application.

If manure gets into a stream, it’s more likely to cause a fish kill when stream flow rates are slow.

“Our streams here aren’t as low as last year, but they are significantly low,” said Scott Grummer, Iowa Department of Natural Resources (DNR) fisheries biologist in Clear Lake. “And if you have low flows, any concentration of … manure that reaches a stream can cause ammonia levels to rise and oxygen levels to dive. That can be detrimental to fish.”

Despite a somewhat later harvest, Grummer said he’s already seeing manure application on cropland that was too wet to plant last spring. He recommends allowing a little more distance between application areas and vulnerable spots like streams and tile intakes this fall.

“Slow down and take care during application, because every fall we see some overturned tankers,” said Cindy Martens, a DNR environmental specialist who investigates fish kills.

We ca help people get the spill stopped and, hopefully, limit environmental damage.”

The first occurred Sept. 1 on the Little Rock River near Doon in Lyon County. DNR environmental specialists traced the pollutant source to runoff from two cattle open feedlots. The DNR’s fisheries staff found 522 dead fish, including catfish and smallmouth bass, along 1.75 miles of stream. The fish value is $2,349.

Chlorinated water caused a second fish kill Sept. 5 in Cedar Rapids after a water main broke, spilling chlorinated drinking water into McLoud Run. About 145 fish were killed, including at least 70 trout. The fish value was $1,516.

The third fish kill occurred Sept. 16 on Big Cedar Creek about seven miles northeast of Fonda in Pocahontas County. Investigators found large numbers of dead catfish and smallmouth bass, plus non-game species like minnows, along nearly five miles of stream. DNR specialists found manure from a small hog confinement seeped into a tile line leading to the creek. The fish are valued at almost $36,000.

Investigators have not traced the cause of a fourth fish kill on Sept. 19 near Westside in Crawford County, as the fish had been dead for a while.