Digested Organics created a niche for themselves by listening to farmers. 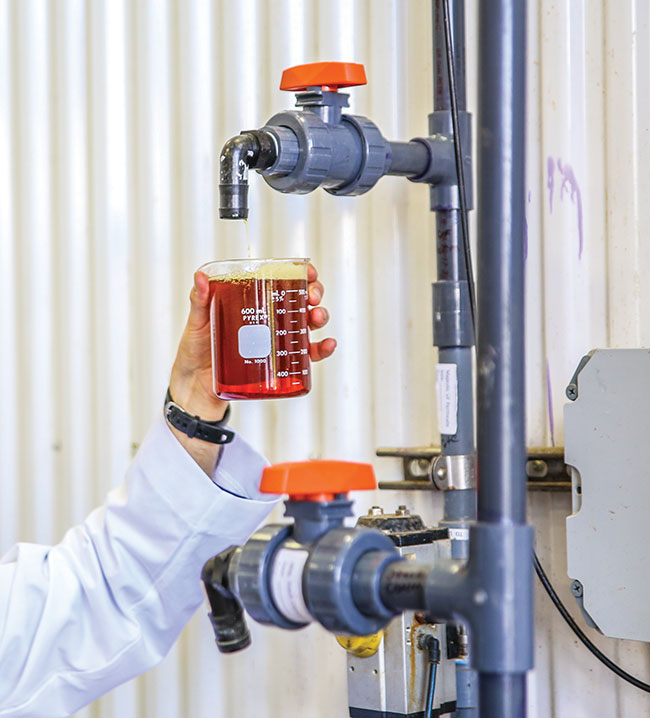 The course of success never did run smooth.

Bobby Levine, CEO of Digested Organics (DO), started the company in 2013. Currently, DO specializes in filtration of high solids, organic wastewaters – tricky wastewaters that are difficult to remediate in other ways. Their filtration equipment can separate and reclaim clean water, and many of their clients are dairy and swine farmers.

However, that wasn’t always their focus.

“When we first started the company, we thought we were going to focus on food waste digesters, and we actually had a solution for small-scale distributed food digesters,” Levine explains. “The idea was to sell [big box stores] and university cafeterias digesters to process their organic waste, make clean energy on site and reduce their disposal costs. The reality set in, after a couple years of working on that, that it was really hard to convince people not to use their dumpster. They’ve been landfilling their organic waste forever – why change, why spend more?”

Digested Organics then shifted its focus to digesting manure, ending up in conversation with a dairy farm in Wisconsin.

While he hoped that DO’s technology would revolutionize small-scale digestion for dairy farms, Levine quickly learned, by listening to the farmer, that he needed to provide a different solution.

“It was a good lesson for us in that the customer thought he wanted a digester, but what he really wanted was a way to get rid of his manure, and he wanted to concentrate his nutrients. We went there trying to sell a digester, and we ended up selling a digester. But we also ended up selling a filtration solution on the back end of that digester that effectively de-waters the product that comes out.”

In discussing the needs of other dairy and swine farmers, DO found its niche.

“We went from food waste to dairy manure, and then from digestion more to filtration, by listening to the farmers tell us, ‘There’s 10 people out here who are trying to sell me a digester. But no one can get rid of what comes out of the digester, which, frankly, looks just like what went in the digester. We still have all of these gallons, we still have to store them, we’re still worried about our lagoon overflowing, and we’re worried about nutrient runoff.’ So, the whole management of the liquid side of a dairy farm and a swine farm really became apparent to us through that work,” he says.

“I think it’s just one of those cases of focusing on something that you thought was really critical, that the customer needed to gently remind you is not that critical. But it was an important lesson for us. I think it got us moving in the right direction towards being able to provide something that the industry really needs.”

Recognizing this need and shifting their business model to fill it has helped DO remain competitive and build relationships. “There’ve been a lot of companies that have tried to sell things to farmers that don’t work. We’re very cognizant of that and we worked really hard to make sure that’s not the case for us. We want to be sensitive to that and make sure we’re providing a good solution, and we’re there to back it up.”

In June, DO won the Manure Innovation Challenge, put on by the Yield Lab Institute, an agrifood tech entrepreneurship support organization. The Challenge consisted of a year-long program of mentorship and meetings for manure-centric start-up businesses. The Manure Innovation Challenge provided an opportunity for DO to refine their focus and work alongside others who would usually be their competition.

“Normally, we don’t want to talk to them in a way where we could disclose proprietary information, but actually it was really fun to get people that usually talk about manure in a room and be like, ‘Hey, we can all just talk about manure together.’ The other companies, I think they’re doing great work,” Levine says. 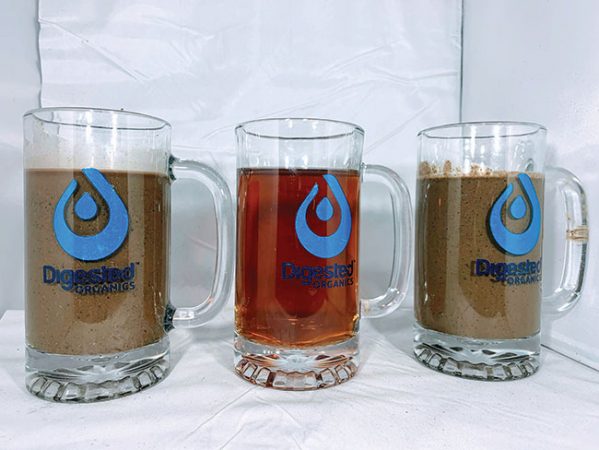 Two mugs of manure surround one of ultrafiltered permeate. Drinking the reclaimed clean water has become a rite of passage for DO employees.

He notes that the problem of manure remediation is on such a large scale that there’s room for each company to succeed. “We’re very honored to have won, but this is such a massive problem that I could go sell 100 filtration systems, and there still be room for every other company to sell 100 of their systems. And we still would only touch a fraction of big farms in the United States,” Levine says. “I’m hoping they all also were buoyed by [the Challenge] and their solutions should come to the fore, as well.”

Levine notes that, with the World Wildlife Fund as a sponsor, some of the discussion centered on sustainability and how to create metrics and incentives around it. DO can sell filtration systems based on tangible benefits, like less odor, reduced hauling and spreading costs, less nutrient runoff, higher crop yields. But at the moment, there is no external validation for many sustainability benefits, like reimbursement or credits for reduced phosphorus runoff or reclaimed water.

“We went as far as brainstorming about, is there value to branding and to the end sale of the milk?” he says. “How do you get benefit for the farmer for doing something different? It’s a big conversation that is not going to happen overnight. But it was fun to be part of that.”

The Manure Innovation Challenge was intended to end in a live, public pitch competition at the Animal AgTech Innovation Summit in San Francisco in mid-March. When the event was cancelled due to concerns about COVID-19, the Yield Lab Institute took the pitch competition to a digital platform.

“On the one hand, it was a little disappointing not to be able to make it a real event. But on the other hand, totally understandable given what we’re going through,” Levine says. “I think it worked well remotely. We still were able to connect with a lot of people afterwards via social media and other outlets to follow up and we definitely got some new international interest from it. So again, it was overall a very positive experience.”

The international exposure the virtual pitch competition provided was a major bonus for DO, and they plan to pursue opportunities in Europe in the near future.

Two things stand out to Levine as the main benefits of participating in the Challenge. “One was the platform it afforded us – the opportunity to speak at the events and the conclusion, and the social media and PR benefit that generated,” he said. “But maybe even more than that were the connections we made with the attendees at the events. Being part of it and being in that ecosystem of talking about manure sustainability has led to relationships that will be beneficial to us in the coming years.”