Does precision agriculture have a place in manure management? 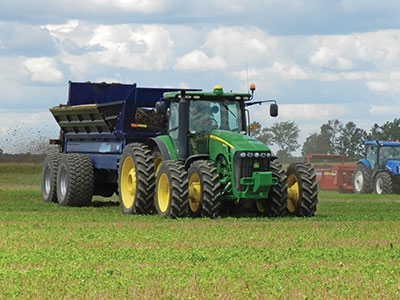 High tech meets low tech at a manure management demonstration at Jake Kraayenbrink’s farm near Moorefield, Ont. This John Deere is equipped with GPS technology – the yellow GPS unit is mounted on the roof of the tractor. Karen Dallimore

With a show of hands, about half of those listening to the presentation in Jake Kraayenbrink’s back 40 near Moorefield, Ont., confessed to having a smartphone of some sort.

That means that half of the crowd at a recent Ontario manure management demonstration would instantly be able to pinpoint their location at that particular moment, in that particular field, using the GPS feature on their smartphone. It also means that they may be only a step away from utilizing precision agriculture to manage their manure.

What exactly is precision agriculture? Basically, it’s farming by the inch instead of the acre. It’s using a GPS (global positioning system) and imagery – satellite and sensor data – with computer software to map and manage field data, generating distinct records for every field of the farm with the goal of better managing resources.

The most common tool to achieve this is GPS technology, used on field equipment to accurately steer and control applications based on the position of the equipment in the field. Every operation done by a piece of equipment can be mapped and data is managed by software specifically developed as a business management tool.

But does precision agriculture technology have an application in manure management?

“Yes,” said Prong. “That’s the purpose of precision agriculture: getting more exact with our field operations and gaining the efficiencies through that.”

Using precision agriculture technology tools can increase manure placement accuracy and application rates, but then the data can be sent back to the office to map your fields and help to keep good records too.

When it comes to manure application, the placement accuracy you’re looking for is probably six to eight inches, explained Prong. That’s good enough to make sure you don’t have any big skips as you move up and down the field, but at the same time you’re not getting a lot of overlap either.

One good example of where GPS accuracy would come into play in nutrient management would be side-dressing liquid manure into standing corn: it’s tricky and there is not a lot of room for error. Corn planted with high accuracy guidance will have bullet-straight rows but, more importantly, you can go back exactly into same wheel track within one inch six or eight weeks later.

Some people may say: “It’s just manure, why do we have to record all that data?”

As your commercial fertilizer costs go up, manure becomes liquid gold, said Prong. There’s a tremendous value to what you’re putting on the land. If you’re going to take the time to work with an agronomist for your fields and you’re expecting a certain yield from your ground, it’s just another piece of the puzzle that the tools of precision agriculture are
going to record and track for you.

Another side of the coin is, unfortunately, the fact that manure is also regarded as a hazardous material. We need to know where it’s going down as well as setbacks from wellheads and waterways, said Prong. Every time you use a GPS system it provides an audit trail: this is how much I put down and this is where I put it down.

One of the key pieces of information is the amount of manure you’re putting down, which involves not only measuring amounts but also measuring application rates. This is where a rate controller can be useful.

For solid manure, a rate controller gives you the ability to measure load size under a dry spreader box, measuring change in weight to calculate the application rate. A hydraulic gate valve can then help regulate the amounts going on the field.

“That’s important in injected manure where you can’t see what’s going in the ground,” said Prong. “It’s amazing how a change in ground speed can spike your application rates.”

For example, at four miles per hour with a 2,500-gallon per acre target flow, you will be applying 300 gallons per minute.

Keeping the same flow but dropping to three miles per hour, that application rate is now 3,300 gallons per acre. That’s a 30 percent increase in application rate just by slowing down, and that decrease in speed can be caused by something as simple as going up a hill.

Premier Equipment has developed a creative solution that integrates an application rate control system with the IVT transmission of many John Deere tractors. As Prong explained, their rate controller actively adjusts the transmission of the tractor to maintain a consistent ground speed, which is highly critical in a dragline scenario for maintaining a consistent application rate.

“That’s a plus for nutrient management,” said Prong. When you need to calculate how much commercial fertilizer to use above and beyond just manure, you’ll have accurate data.

Whether you have a GPS in your tractor or in the phone on your belt, or maybe you take a GPS unit out on the four-wheeler to chart your fields, you’ll still need some software to process the data.

Basically, software just helps to organize your data. The detailed records you bring in from the field will need to be stored and accessible since you will need to go back and analyze that information over time, both in the short term and over several years.

A number of office software products are available to do this and more programs are still in the development stage. Farm Works software has just officially released the Connected Farm app that runs on iPhones and Android smartphones. This allows you to do field scouting with a GPS enabled smartphone.

Data can be transferred from the tractor using a memory stick, but with wireless technology, that transfer can be done while you’re still out in the field. As soon as you’re done putting manure down you can send the details in to your office desktop computer wirelessly and software will automatically recognize it and file it for you, including the geographical locations in the field.

“Quite a few people haven’t gotten there yet – they’re physically moving their data from the tractor to the desktop, but I think this is the next step in precision agriculture,” said Prong. Looking to the future, he predicts that the next advancements will be in wireless transmission and software improvements.

Related
Keeping drag hoses in good condition
From the Editor: January/February 2016
Is iron oxide the answer for manure gas safety?
Eurotier: Showing off the latest innovations