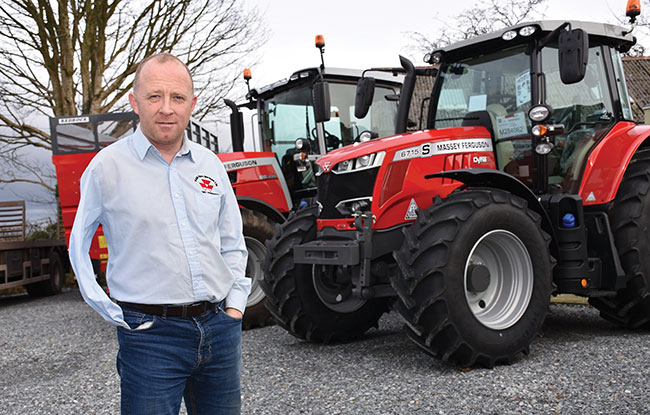 Equipment salesman William Sayers survived a farm accident at the age of 12. Now he shares his story openly.

Even though we rely on the skill and expertise of our blue light services to save lives, no one wants to see them have to attend a farm, or any other place for that matter.

Farming, sadly, is the second-most dangerous occupation in the U.K., only outranked by the construction industry.

The latest figures from the U.K.’s Health and Safety Executive (HSE) states there were 25 work-related farm deaths between April 2021 and March 2022, down from 41 deaths the previous year.

More than a third of the workers killed were aged 65 years or older, and the youngest person killed was a nine-year-old child.

Many groups around the world lobby hard to farmers, reminding them about the perils of farming and encouraging them to take a moment to ensure the task before them is safe before proceeding.

Of course, any activity to highlight farmyard dangers is welcome, but one U.K. agri-machinery sales representative who, as a boy, survived a farm accident that took one of his limbs, is on a mission to really drive the message home.

William Sayers says he was very lucky to have survived his horrific farm accident back in 1990, that saw him lose an arm in a tussle with a pto shaft. It was quite a devastating blow to the young 12-year-old boy from Donemana, Northern Ireland, but he is using his personal experience to raise awareness and help try and prevent other farm accidents.

For the past 27 years, Sayers, now 44, has worked in sales for the Massey Ferguson dealership, D & M Farm Services in Eglinton. It’s a job he adores, as it gets him out and about onto farms discussing the farmer’s tractor requirements as well as other machinery. That might be the day job but Sayers also enjoys openly talking about his accident to others and has become an ambassador to promote farm safety.

Sayers lost his arm on Easter Monday in 1990 after his coat got caught up in the PTO shaft of a slurry tanker while he and a friend were filling it with slurry. That quick moment changed his life forever, but he is very thankful to have survived with his life.

“It just happened in an instant,” says Sayers. “The next thing I knew I was lying on the ground and could see my right arm lying across the yard. I knew I had lost it but it still felt that I still had a right arm… The biggest issue I had was that I had disobeyed my father, who had told me not to go near the PTO shaft. The fear I saw in both his and my mother’s eyes as I ran up to the house has left me with an immense sense of guilt ever since.”

The shaft on the tanker was fully guarded, except for a few inches at the top. Sayers was wearing a coat his mother had asked him to put on during the last load of slurry as it was getting colder in the evening. As Sayers went to adjust the regulator on the tanker pump to help it fill quicker, the shaft caught his coat, which wasn’t zipped, and dragged him in.

“I thought I was dying,” he says. “All I was wearing after the shaft caught me was my underwear. My dad rushed me to hospital as my sister Jane picked up my arm and washed it. The hospital actually sent an ambulance out to the farm to collect my arm and later tried to sew it back on but without success.”

His family farm was a dairy farm and his father had set it up with a new milking parlor for him to take over one day. Sadly, that day never came as it was impossible to milk cows with one arm. Today, the farm is home to a few suckler cows, and Sayers still goes there to check on his father, George, who is now 85. His mother Kathleen sadly passed away a few years ago.

“I’m very happy working as a sales representative for D&M Farm Services,” says Sayers. “I am very thankful that the owners, Jim Dinsmore and William Moore, took me on all those years ago.

“It’s amazing how tractor and machinery technology has evolved over the years. I keep well up-to-date with all the new products released by Massey Ferguson, more so via online training courses these days. My job is quite varied and I never know what each day will bring.”

Prior to his accident, Sayers was right-handed and has since had to learn how to write all over again with the left hand. Driving is less of an issue. “I’ve never been affected mentally by the accident, which is remarkable. My father, who lost one of his legs in a farm accident when he was only two years old, was very supportive over the years and helped me a lot. I also lost my uncle William, who I was named after, in a tractor accident when he was only 25 years old.

“I’ve had to learn to do a lot of normal tasks like writing, tying my laces and buttoning my shirt with the left hand, but I’ve mastered them all.”

His message to farmers remains very strong: “It is your own responsibility to ensure you work [safely] and in a safe environment. There are plenty of warnings from various agri groups and bodies urging farmers to heed the safety advice. People think accidents like mine never happen to them, but they can and do. I did not heed my own father’s instructions and I paid a heavy price for that. If my story can help prevent someone having an accident, losing their arm, being seriously injured or even losing their life, then it is worthwhile for me telling it.”

In his role as a farm safety ambassador, Sayers volunteers his time to talk to farmers groups, young farmers, church groups and anyone who asks to hear his story. He also gets calls from people who have already had an accident and lost limbs and need someone to talk to.

“I’ve had a number of people call me who have lost a limb during an accident and need someone to talk to for moral support and advice. I will talk to anyone, anytime, if they want and am very happy to do so.” •

Related
Safety in motion
Lessons learned from a career in safety
Canadian Agricultural Safety Week kicks off
FROM THE EDITOR: Let’s not get ahead of ourselves
Tags