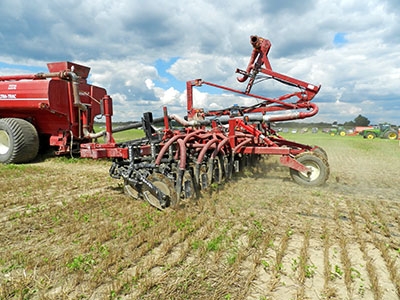 This Hydro Engineering Injection System has a Yetter coulter at a four-degree angle on 13-inch centers on a 28-foot toolbar, mounted behind a Jamesway tanker. Karen Dallimore

It wasn’t too long ago that manure was just a waste that nobody wanted. For more than a decade, Dennis Nuhn, president of Nuhn Industries Ltd., has watched manure become more appreciated.

“Manure injection and manure in general – it’s come a long way in the last 10 years,” Nuhn told the crowd that had gathered at Jake Kraayenbrink’s farm near Moorefield, Ont., for a manure demonstration day late last summer.

Nuhn has been involved in manure injection research for more than a decade. Thirteen years ago, he was lucky to be part of a multi-year project doing manure injection with Bonnie Ball and Agriculture and Agri-Food Canada. As Nuhn described, they used water colored with Freshie dye and dug it up to see where it all went.

“It really was a fun time,” Nuhn recalls. “Injection was a hard sell at that time because nobody really appreciated the value of manure so it never really caught on.”

Computerized spreading with GPS was just coming in at the time, which meant a much more accurate spread.

“All of the lines and the differences between the plots were well defined,” said Nuhn. “It wasn’t so grey as it always was.”

But the biggest change in acceptance for injection though was three or four years ago when fertilizer did the “big spike,” said Nuhn: “Suddenly manure didn’t just smell anymore and everybody started looking to get more value out of it.

“Probably the simplest and easiest way to get more value from your manure is to inject it,” Nuhn told about 135 observers at the demo day.

The 12,000-gallon Quad that Nuhn had brought to the demonstration was fitted with a Dietrich injector.

“The farmer who wants to get more bang for his buck and wants the best application possible will probably go to the Dietrich or something that puts it in the ground,” Nuhn told the audience.  “There’s another attachment that Bill (Dietrich) has come out with called closures – which is a double disc that covers the crack up.”

The trouble with injectors is that no one injector is good for every application, said Nuhn. In Iowa, Nuhn sells a lot of double disc injectors that put manure on the ground and throw dirt on top of it. The custom haulers like it – it’s fast and easy and can go through anything – but with injection each application is a little different.

Another issue with manure was when regulations came in that said you couldn’t spread it around the barn forever.

That’s where the capacity of the Nuhn Quad came in. The Quad is an integrated system, not just two tanks in line. It was a hard sell in the beginning because it was different, said Nuhn, but the train concept is growing in popularity as custom haulers get bigger and drivers realize the handling advantage of having two tanks versus one larger tank.

With in-tank mixing, the Quad provides a consistent spread too. “What I say is if you spread manure, the key is you want to get the right amount and put it on properly,” said Nuhn “If the first half is different from the last half you’re not going to get the results you want.”

A triple Quad experimental unit is now in the works in Iowa. Nuhn likes the train concept but while Nuhn’s standard double Quad is very maneuverable, able to turn in tight spaces and easy to back up, he admits this one is harder to back up and its use may be limited to larger, flat acreage.