EuroTier, the world’s leading trade show for animal production, provides an overview of the latest and greatest in manure management and processing. 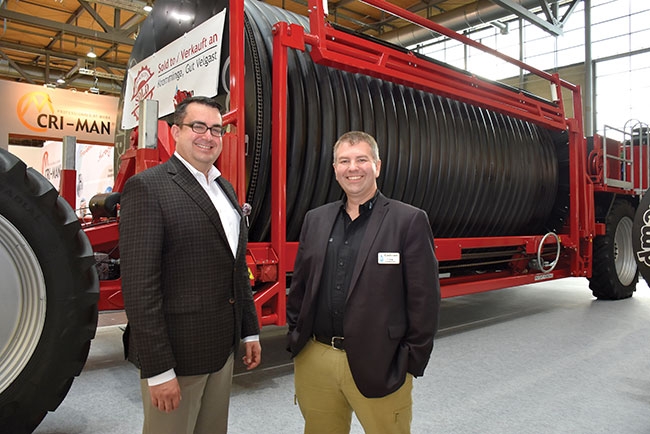 Using manure more efficiently and saving on input costs were two of the key areas focused on at the international EuroTier trade show held in Germany in late 2018.

Defined as the world’s leading trade fair for animal production, EuroTier is held every second year and is organized by the German Agricultural Society, DLG.

This year approximately 155,000 visitors from 130 countries attended the show to view the latest innovations from 2,526 exhibitors.

If farming is to be sustainable in the future there is no doubt the industry needs to embrace new technology by the horns and put it into practice. And while much of the technology at the event centred on robotic feeding, housing comfort and feed supplements, many companies also introduced new techniques in dealing with manure.

Whether it was by separation, composting or burning, visitors to EuroTier saw firsthand how they could make more use of the readily available natural resource on their farms, and even a few options to make money from it.

Composting is one of the oldest and most widespread methods of utilizing manure across the world. Germany-based company, Karl Farming exhibited its range of high-tech composters that are already being used to reduce food waste in Canada. However, at EuroTier, Karl Farming CEO Karlheinz Rieke explained how his system is now set up to compost livestock waste.

“We have four sizes of composters on the market – eight, 40, 60, and 100-cubic metres, but there is a new one being finalized with capacity of 200-cubic metres,” he said. “The 100-cubic metres model can take in 12-tons of pig, poultry or cattle manure each day and also produce the same quantity per day after eight to 11 days in the composter. Advantages with this process include no smell, no bad bacteria and a very valuable by-product fertilizer with 80 percent dry matter.”

These composters are very popular in China and Japan and are becoming more popular on North American farms.

“Our Greendragon TC range is a vertical fermenter that makes use of oxygen from the manure to make a premium fertilizer. During the process the manure is homogenized and all harmful bacteria are killed by the high temperature.”

On the Bauer stand, its latest S300 separator was in working mode. The Bauer S300 is a new design of press-screw separator, which is able to produce material with a higher dry matter content than its predecessor of up to 32 percent. It can process waste at a rate of up to 16m3 per hour and, according to the company, has low operating costs. The end product can be used as a material for bedding livestock.

Separators proved popular at the show as over on the Rotecna stand there was a Techapur solid liquid model that also improved the fertilizer value of slurry. This model is made from stainless steel, and performs the three basic operations of filtering pressing and scraping in a single unit.

It has a large filtering surface for treatment of up to 20m3 per hour and a power consumption of less than 0.75Kw per hour. This one can separate up to 40 percent of total solids and reduces up to 20 percent of the liquid volume.

This machine holds 800-metres of 5.5 inch hose and pumps slurry with a Cornell pump powered by a John Deere 375-horsepower engine. It is designed to be a one-man operation and can apply slurry to growing crops up to one-metre in height.

A tractor pulls the injector with the patented CMA swivel arm, which in turn pulls the hose away from the CMA and incorporates in 30’ or 40’ width rows. When the tractor gets to the opposite end of the field (up to 0.5 miles), the tractor turns 180-degrees and comes back down the field, incorporating another 30’ and 40’ strip. When the tractor turns, the swing arm turns to the side of the toolbar, which keeps the hose in the same row it was pulled out on.

While the operator is completing his return trip, the remote control automatically moves the CMA forward another 60’ or 80’ in order to start another pass. The empty weight of the unit is 32 tons.

Craig Cadman, vice president of operations and Scott Black, sales representative, were present on the stand and were happy to report the unit on exhibit had been sold to a farm in Germany.

A series of decanter lines were introduced by GEA technologies, which treat manure to enable the utilization of the associated nutrient surpluses. Through continuous removal of solids and the high dewatering performance, the clarified manure is largely free of phosphate and can thus be spread on land without causing any environmental problems. Most of the phosphor is in the solid phase and can easily be transported to nutrient-deficient areas.

The GEA manure decanter separates 70 to 90 percent of the phosphate and 30 to 35 percent of the nitrogen compounds and dewaters the solid particles to a compost-like crumbly consistency. This material can later be processed into fertilizer after being dried or composted.

GEA also introduced its new slurry pump that suits all pits as it can adjust to varying lengths. The Super Slider Pump is a new eight-inch, adjustable-length, highly-versatile manure pump, specifically designed for use by dairy, pig and beef farmers with multiple pits.

Belgian machinery manufacturer Joskin celebrated its 50th anniversary at the event and exhibited a wide range of manure application machinery from small tankers through to the giant manure injection applicators.

Eurotier will have the latest manure management innovations on display again at its next event, taking place in Hanover, Germany in November 2020.