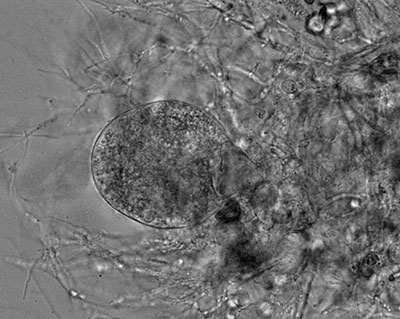 An image of anaerobic gut fungus found in the digestive tract of a horse. John K. Henske

Stepping into unexplored territory in efforts to use corn stalks, grass and other non-food plants to make biofuels, scientists recently described the discovery of a potential treasure-trove of candidate enzymes in fungi thriving in the feces and intestinal tracts of horses.

They reported on these enzymes – the key to economical production of biofuels from non-food plant material – at the 245th National Meeting & Exposition of the American Chemical Society (ACS) held recently in New Orleans, La.

Dr. Michelle A. O’Malley explained that cellulose is the raw material for making biofuels from non-food plant materials.

Cellulose, however, is sealed away inside a tough network of lignin within the cell walls of plants. To produce biofuels from these materials, lignin must be removed through an expensive pretreatment process. Then, a collection of enzymes breaks cellulose down into sugars. Finally, in a process much like production of beer or wine, those sugars become food for microbes to ferment into alcohol for fuel, ingredients for plastics and other materials.

“Nature has made it very difficult and expensive to access the cellulose in plants,” said O’Malley. “Additionally, we need to find the best enzyme mixture to convert that cellulose into sugar.

“We have discovered a fungus from the digestive tract of a horse that addresses both issues – it thrives on lignin-rich plants and converts these materials into sugars for the animal. It is a potential treasure trove of enzymes for solving this problem and reducing the cost of biofuels.”

The digestive tracts of large herbivores such as cows and horses, which can digest lignin-rich grasses, have been a well-trodden path for scientists seeking such enzymes. But in the past, their focus has been mainly on enzymes in bacteria, rather than fungi, which include yeasts and molds. The goal: Take the genes that produce such enzymes from gut fungi and genetically engineer them into yeasts. Yeasts already are used in time-tested processes on an industrial scale to produce huge quantities of antibiotics, foods and other products. That proven production technology would mean clear sailing for commercial production of biofuels.

O’Malley explained that several genes from gut fungi are unique compared to bacteria, since the fungi grow invasively into plant material. Also, they secrete powerful enzyme complexes that work together to break down cellulose. Until now, however, fungi have largely been ignored in the search for new biofuel enzymes – and for good reason.

“There was relatively little scientific knowledge about fungi in the digestive tracts of these large animals,” O’Malley explained. “They are there, but in very low numbers, making it difficult to study. The low concentrations also fostered a misconception that fungi must be unimportant in digestion of cellulose. And it is extremely difficult to isolate and grow these fungi to study their enzymes.”

O’Malley’s research group at the University of California, Santa Barbara, collaborated with researchers at the Broad Institute of the Massachusetts Institute of Technology and Harvard University. They worked with a gut fungus isolated from horse feces and identified all the genetic material that the fungus uses to manufacture enzymes and other proteins.

This collection of protein-encoding material – the fungus’s so-called “transcriptome” – led to the identification of literally hundreds of enzymes capable of breaking through that tough lignin in plant cell walls and the cellulose within. The team now is shifting through that bounty to identify the most active enzyme and working on methods for transferring the genetic machinery for its production into the yeast currently used in industrial processes.