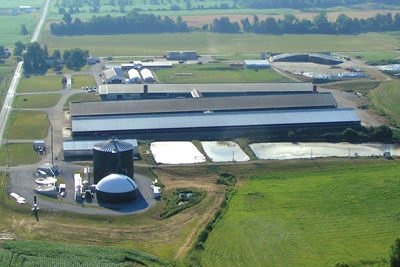 A new, three-stage, anaerobic digestion and biogas power-generation system has been constructed and is now online at Synergy Dairy farm, located about 40 miles east of Buffalo. N.Y. Contributed

New York dairy farmer John Noble is excited about the potential of a new, three-stage, anaerobic digestion and biogas power-generation system that has been installed on the 2,400-head Synergy Dairy farm he owns with a group of neighboring farmers. He says it represents a new generation of technology that extracts more methane gas from the farm’s manure and produces more power than its counterparts.

The $7 million anaerobic digester and biogas-based power-generation system, which came online at the beginning of 2012, is owned and operated by a Florida-based company called CH4 Biogas LLC.

When asked how much more methane gas and how much more power the company’s technology is able to produce, Lauren Toretta, vice-president of CH4 Biogas, says, “We assume 10 percent more because it is a complete mix system. This is an improvement on an existing technology.”

In addition to a complete mix system, she adds that CH4 is also achieving production gains because of computer controls the company has built into the system.

This isn’t Noble’s first experience with this method of manure treatment. He was among the first dairy farmers to install and operate an anaerobic digester to manage his manure on a neighboring dairy farm called Noblehurst Dairy about 10 years ago. The engine, generator and some PVC pipes from that installation were recently destroyed by fire, but that hasn’t dampened Noble’s enthusiasm for responsibly treating manure generated by dairy farms using anaerobic digestion to capture biogas from manure and then using it to generate power.

Noble says the anaerobic digestion installation at the Noblehurst Dairy did serve a useful purpose as a way to treat raw manure and as a source of power. When operational, it generated power about 85 percent of the time and the dairy was able to offset its power costs based on the amount it produced. The power generated from burning the biogas resulted in about 135 kilowatts per hour. Annually, the digester produced about 850,000 kilowatts.

The anaerobic digester tank is still functional and is being used by Noblehurst Dairy to separate its solids and liquids from 40,000 gallons of manure per day, but the biogas is not being captured. Noble is negotiating with potential system suppliers to replace the biogas collection and power-generation system to get that installation back up and producing power. Both Noblehurst Dairy and Synergy Dairy are located about 40 miles east of Buffalo.

Noble says the new, privately owned, CH4 anaerobic digester and power-generation system installed at Synergy Dairy is in a whole different category compared to his old digester. First, it is 10 times larger, capable of producing 1.4 megawatts of electricity per hour and processing 1.9 million gallons of manure and organic food waste a year.

Second, CH4 Biogas, operating as Synergy Biogas LLC, is the owner and operator of the anaerobic digester and biogas power-generation system. Synergy Dairy simply leases some land to the biogas power producer and supplies the company with its manure. Given his experience operating his old digester, Noble prefers it that way. He says that the dairy’s expertise is producing milk while CH4 Biogas is an expert in the generation of biogas from manure and production of power.

“We saw it as a win-win situation,” says Noble. “Probably the first lesson we learned from operating the Noblehurst Dairy digester was how difficult it is to operate and get hooked onto the grid as a small power-generation player.”

He adds that managing the Noblehurst Dairy digester was also a commitment that was not without its challenges to keep running.

“Our folks had some interest in engineering and it was an interesting project to pursue,” says Noble, “but the maintenance requirements were fairly high. However, we walked into this knowing full well that it would be a 10- to 15-year payback, and it was a net cost savings for us of about $50,000 to $60,000 per year in bedding for the animals and about the same amount in power costs.”

Noble describes a digester as a finicky stomach. Controlling the feedstock going into the digester and maintaining consistent temperatures are critical for achieving optimum biogas generation. Keeping biological activity balanced in the tank throughout the year when temperatures could fluctuate from -10 F to 100 F was also a challenge.

Partnering with CH4 Biogas on the new digester project as simply the manure supplier has relieved the dairy owners of that management responsibility. Noble adds that there is an opportunity to profit-share if the installation is “wildly successful”.

The Synergy Biogas LLC facility is New York state’s first biogas project that will process both animal and food wastes.
Synergy Dairy cleans out the manure from its three dairy barns three times a day to supply the digester. It converted its manure transportation system from a flush to a scrapper system because the new digester required a drier manure product. It flows into a small storage tank that feeds the digester as needed.

Toretta says that tanker trucks collect liquid food waste such as whey from nearby dairy plants and oils and fats from bakeries and food manufacturers as much as 60 miles from the Synergy Biogas facility to complement the manure provided by Synergy Dairy.

The combined slush is transferred to a large receiving tank and macerated using two submersible mixers to gain even consistency. The mixture is then pasteurized.

“The pasteurization step is unique,” Toretta says. “It kills the pathogens that come in through the waste. We then allow the right bacteria to do their job and maximize gas output.”

Pumps transfer the mixture into a 2.2 million gallon anaerobic digestion tank where the digestion process occurs over a three-week period. The captured biogas flows through a scrubber that removes hydrogen and other impurities. The biogas is then warmed in a heater and then flows to a compressor. According to Noble, the digested mixture actually proceeds through a third tank where it sits for a week to 10 days to capture even more biogas before it is separated into liquid and solid by-product streams. The gas, which is collected only in the second and third tanks, is burned in a GE Jenbacher J420 biogas engine. It is designed to run around the clock with as much as 95 percent uptime.

Toretta says because the facility is producing power almost all the time, the company is looked on favorably by other dairy farms and utilities.

Synergy Dairy benefits from this arrangement in several ways. The digester produces a treated solid by-product that Synergy Dairy uses for bedding in its barns. By not having to purchase bedding material, this saves the dairy between $150,000 and $200,000 per year. The facility will produce about 17,500 cubic yards of bedding material annually. The dairy was separating the manure previously and then composting the solids for two weeks before re-using it for bedding.

Now, it can dispense with that composting step and use the dry bedding material from the digester immediately.

The dairy is also able to purchase power from Synergy Biogas LLC at a discounted rate once it ramps up to full production. The plan is to install a second biogas-powered generator that will be used to supply the dairy. Noble believes that it will provide 100 percent of the dairy’s power needs, and will cut its power costs by about half.

The odor emanating from the nutrient-rich liquid by-product exiting the digester and stored in the dairy’s lagoon is also significantly diminished, making for better relations with neighbors. The dairy can store about 10 million gallons in two lagoons on the farm site. The liquid byproduct represents a source of organic fertilizer when it is land applied either using drag-hose systems or tanker trucks on neighboring farms. Some of the crop farmers benefiting from this fertilizer source are also investors in the dairy.

“We pay to have them land apply the manure and then they give us a credit back for the value of the nutrients,” says Noble. One of the challenges the dairy has to deal with is more liquid by-product because of the additional food waste used in the process. It may require the construction of more storage lagoon capacity.

The environmental benefits are not only producing a safer form of organic fertilizer and reducing the dairy farm’s base load greenhouse gas emissions by about 8,500 tons of carbon dioxide annually, but also by processing food waste, Synergy Biogas LLC is diverting about 1.14 million gallons of food waste from landfills and wastewater treatment facilities.

Toretta says CH4 is just beginning the roll out its system and has its sights set on other opportunities in New York.
“New York has a lot of opportunity because of the importance of and focus on agriculture,” she concludes.