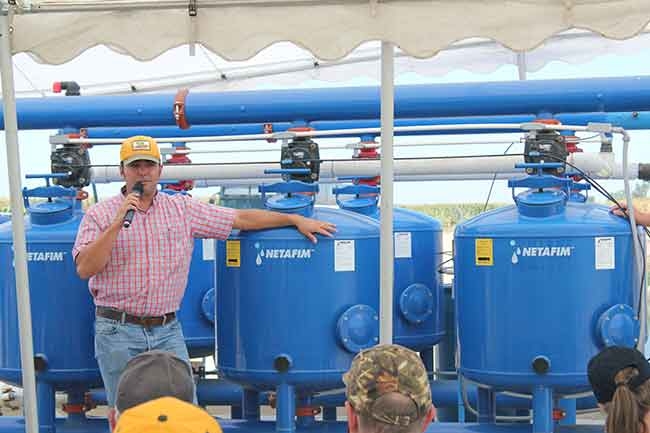 DeJager Farms manager Nate Ray is confident that lessons learned the first year of applying liquid manure via drip tape to his forage crops have shown success is at hand.

As California’s drought entered its fourth year, DeJager Farms turned to drip irrigation systems in order to maximize its irrigation water, especially on their sandy ground where flood irrigation methods need large amounts of water. Ray, however, had to purchase synthetic fertilizers because the readily available manure that the operation had in abundance would clog drip irrigation emitters. With partners Sustainable Conservation and Netafim, in 2014 Ray kicked off a project aimed at developing filtration technologies that not only allowed the use of liquid manure in drip systems, but also more precisely controlled the application rates based on the water and nutrient needs of his crop. This year the partners are refining this new system, aiming for maximum efficiency and yields.

Pushing lagoon water through drip tape sounds like a challenge, but Ray, Sustainable Conservation’s John Cardoza, and consultant Dan Rivers believe this irrigation system will not only help dairy producers boost crop yields, but it will also increase crops’ utilization of nutrients therefore reducing leaching of those valuable nutrients past the root zone.

The system set up at DeJager Farms consists of three parts: the blending of irrigation water/liquid manure, filtration and application to crop. Each is vital to the accuracy and efficiency of the system. Using liquid manure to irrigate and even sending it through drip lines is not a new idea, but Ray said complete integration of the system, with sensors and the ability to control the system remotely, provides more precise application rates and timing.

Rivers said that last year, using drip lines, they applied approximately one part lagoon water to five parts fresh water with the irrigators reading flow meters and manually adjusting valves. The application rate sometimes varied depending of the results of nitrogen tests conducted in the liquid manure source. They also calculated the amount of nitrogen applied after each irrigation.

“The proportional valve adds a whole other dimension to the design of the system,” Ray said. “It took the guesswork out.”

This part of the system is key to achieving high yields, Ray said, because he can apply nitrogen more precisely and at the optimal time during the growing season. The volume of lagoon water and the rate of nitrogen are also recorded. Supplying both to the silage crop in the right amounts at the right time gives them the efficiency they are seeking, as well as a uniform crop from border to border.

“We are going from 65 percent efficiency with flood to 95 percent with drip,” said Ray.

He said the final pieces to perfect the system lie in additional filtration of the lagoon water, possibly with a centrifuge filter.

DeJager Farm’s environmental consultants sample his irrigation water once a month, Ray said, to determine if they are on track with their nutrient management plan. He uses soil and plant tissue samples to make sure his nutrient applications are doing the job.

Once the lagoon/fresh blend is made, the water moves through a double sand media filtration system. The double capacity is to handle the higher solids content of the lagoon water. There is an automatic back flush at rates that depend on the concentration of the water. The goal there is to keep the system operating at the correct pressure.

The filtered irrigation water then is piped to the field where it goes into the buried drip lines and out the emitters. In this system the emitters have been engineered to have fewer turns where solids can accumulate.

Rivers said inspections of the drip tape and emitters have found the integrity is holding up with the addition of lagoon water. They periodically run a blend of peracetic acid and fresh water through the drip lines to clean out algae, bacteria and biofilm. Ray said that with regular maintenance, they expect the drip systems in silage crops to last as long as their drip systems in alfalfa. Ray’s strip-till practice allows the drip tape installed in fields where he rotates winter forage with corn silage to remain in place.

As he considers adding more forage ground to subsurface drip, Ray and Cardoza see another advantage to the practice. Applying lagoon water via drip irrigation helps with his fertilizer costs. Ray said it will also make him a better neighbor on fields closer to town by applying their lagoon water underground.

The feasibility of a system like DeJager’s also has to be considered, Cardoza said. He recommends any producers interested in finding out more about this innovative drip system to contact him directly at (209) 576-7731 or jcardoza@suscon.org.