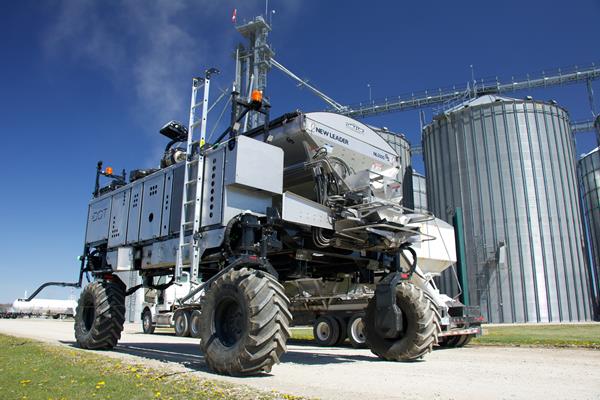 Haggerty Creek is the first Dot unit operator in Ontario. Dot arrived in Bothwell on May 13, 2020, and has already taken to the fields of Chatham-Kent to be used in commercial fertilizer applications.

Dot is a built-in-Canada autonomous farming platform that was first showcased at the 2018 Precision Agriculture Conference in London, Ont. Chuck Baresich, general manager of Haggerty Creek, attended the conference and said, “The concept of a single power unit with multiple attachments is such an exciting technology. Dot was so far along in development when I first saw them, and I have been following their progress ever since.” Baresich saw them again at the 2019 Canada’s Outdoor Farm Show, and visited their research farm in Regina in October.

The practical and immediate application is operator efficiency. The operator can be answering calls and providing service to customers while the machine is spreading product in the field. “There are other things our staff can be doing, rather than driving the machine,” Baresich said.

Dot Technology Corp., a leader in autonomous platforms, was purchased by Raven Industries in early May 2020. As a Raven Industries dealer, Baresich’s decision to move ahead with the technology was easily made. “I knew there was going to be a solid investment behind this technology,” Baresich said. “Autonomous farming isn’t coming. It’s here. Dot is the first step, and we wanted to lead the charge.”

Haggerty Creek Ltd. is jointly owned by the Baresich brothers, Chuck and Justin, and Agris Co-operative Ltd. Haggerty Creek has been active in precision farming for many years, specializing in controllers and farmer training. Now they are early adopters of autonomous farming equipment with the purchase of the Dot platform and an additional smaller unit for soil sampling and other applications.

Agris Co-operative is a 100 per cent farmer-owned grain marketing and farm-input supply company that serves more than 1,000 farmer-owners in 14 locations in Essex, Kent, Elgin, Middlesex and Lambton counties. The co-operative is a partner of Great Lakes Grain, a grain merchandising company.