How compost and sale of manure is saving space in the local landfill – and making gardeners happy. 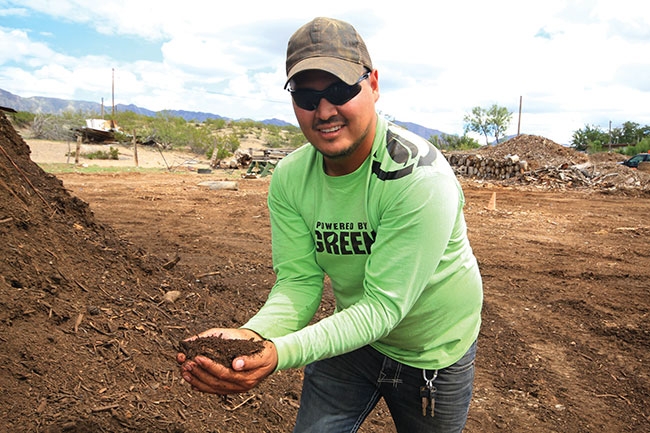 It is often the case that great partnerships are started through the involvement of a mutual friend. That was certainly the situation with the El Paso Zoo and New Green Organics, both located in Vinton, Texas. The pair has formed a relationship that has given birth to something called Zoo Doo.

“A good friend of mine, a teacher by the name of Travis, called me one day and told me he had set up a meeting with the zoo directors and that he was looking to get one or two loads of zoo animal manure for a school project,” explains Carlos Huerta, co-owner of New Green Organics (NGO). “He told me he had no idea what the logistics would be like and that he thought I could possibly advise. He invited me to the meeting and we all gathered our thoughts.”

The idea that emerged at that 2014 meeting was a large-scale composting facility and sale of zoo animal manure. Up to that point in time, the zoo’s animal manure had to be sent to El Paso city landfills by the tens of thousands of pounds every month. Nearly 1000 pounds of manure is produced daily at the zoo and, while zoo staff would have liked to be able to compost it on the property, they just didn’t have the space or time to do so. NGO, a local composting business established in 2011, seemed like a perfect potential partner. Huerta had started the business with the very idea of diverting green waste from landfill, reducing greenhouse gas emissions at the same time he produced soil-amending compost.

So, in 2014, the Zoo Doo pilot project began. NGO would handle the composting and sale of the product, and the zoo would get 10 percent of the profits. There wasn’t much doubt that customers would snap it up. First of all, the product was unique and of excellent quality – with manures from herbivores such as elephants, rhinos, zebras, giraffes, camels, ostriches, antelope and many others (along with their used bedding and food scraps) being expertly mixed by NGO with human food waste, leaves and woody debris and composted to perfection to kill any harmful bacteria. In addition to getting a great product for their gardens, customers would also be helping prevent reduction in local landfill capacity and financially supporting the zoo. Zoo Doo became available for wholesale pickup by the cubic yard and is also delivered by NGO to homes and businesses, including spreading if desired. Some Zoo Doo also goes back to the El Paso Zoo for use in its spectacular gardens and exhibits spread out over 35 acres.

“That first year, we got to see how smoothly everything would work,” Huerta explains. “The needed adjustments were made after that and all the rest of the years have fallen into place nicely. We initially had a higher carbon to nitrogen ratio than is desired for proper composting, which meant the process took longer to finish. We added more nitrogen-rich materials like zoo manure and food scraps and less carbon-rich materials like straw and wood chips until the ratio was closer to 30:1 carbon to nitrogen and more ideal for achieving desired results.”

Carlos Huerta, co-owner of New Green Organics, holds a handful of Zoo Doo, the compost he creates by combining manures from herbivores at the El Paso Zoo with human food waste, leaves and woody debris.

In terms of composting zoo animal manure versus cattle manure, Huerta says there is no big difference.

Huerta started NGO after doing his research on local and state requirements for composting. The next step was to set up a receipt program with local tree and lawn care companies to gather plenty of raw vegetative materials. Not long after, NGO began selling mulch, firewood and small batches of compost. Initially, Huerta and his team purchased a small tractor and a manual wood chipper.

As with most new businesses, obtaining financing for investing in this equipment, along with achieving fluid financial operation, were early challenges. Things changed in 2016, when NGO partnered with Wondor Eco:Nomics, a local, private financial incubator for small sustainable companies. In exchange for equity, capital was provided, allowing NGO to purchase the equipment it needed to grow. With the investment of just under $200,000, NGO bought an industrial tub grinder, large wheel loader, dump trucks, a motorized screener and also did upgrades to existing equipment. With the investment package came professional consulting from the Wondor team in the areas of sales, marketing, and business administration with a strong focus in developing the Zoo Doo brand through specialized marketing techniques.

Another milestone was obtaining of recognition for Zoo Doo through the Organic Materials Review Institute (OMRI).

“This has placed us as one of the leading, local producers of quality compost and the only one with this type of recognition,” Huerta explains. “It has also boosted our compost sales, making compost the cornerstone of our business.

“We do not say our compost is organic because that is actually a coined phrase owned by the U.S. Department of Agriculture and pertains only to edibles. In our category, which is composted animal manures, what is looked at is the process behind the actual making of the compost. How it is made determines if it is listed by OMRI.”

He adds that the exotic herbivore manure from the zoo not only has a diverse and unique biota provided by a multitude of different animals, but comes with the assurance that these animals have diets that are all natural and free of hormones and antibiotics.

The demand for Zoo Doo compost has been slowly rising year after year. According to Huerta, this is due to the good results people get in their gardens. Exposure has also been gained from a professional print media campaign launched in 2017 as part of the Wondor support package. Zoo Doo is also advertised through various social media avenues.

“It feels great” to be part of this sustainable initiative, says Huerta. “Since I began making compost, I have worked with manure, so it came as no surprise when the day came to work with the zoo and the City of El Paso. Coming together was like fitting two puzzle pieces towards achieving what needs to happen and what we need to do as a city to alleviate some of the damage done by non-regenerative practices to our Earth. To me, there are very few things more rewarding than doing what we do.”