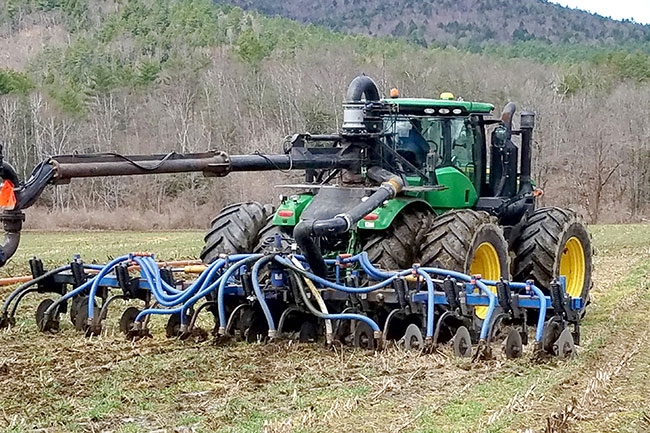 Matthew’s Trucking is doing its part to stem the tide of farm nutrients seeping into Vermont’s Lake Champlain by being among the few in the state to offer manure injection services. Contributed photo

Lake Champlain is the sixth largest lake in the United States with more than 300 kilometers of shoreline attracting thousands of visitors every year. There are also many dairy farms on the land surrounding the lake.

Given the growing frequency of blue green algae blooms appearing on the lake, State authorities were strongly motivated to try to stem the tide of farm-based nutrients seeping into the lake. These nutrients were largely being blamed for fueling algae growth.

Legislators held extensive public consultations on Vermont’s proposed new Required Agricultural Practices (RAP) in 2016, with final regulations approved in early 2017. The state now requires mandatory custom applicator certification and training, which was provided in late winter in advance of the busy spring application season. The new RAP also requires custom manure applicators to keep detailed records on where they apply manure and how much.

These new regulations came as no surprise to Matthew’s Trucking, although co-owner, Eric Severy, says it will require some adjustments and experience to become familiar with the new regulations. As many of their customers are located right around Lake Champlain, they are very familiar with the nutrient runoff issue. That was a major reason why they invested in their two manure injection systems. Today, about 70 percent of their dairy customers situated near the lake are using the manure injection method. In total, they apply about 100 million gallons of manure annually. About half is manure injected into corn crops, with the majority of the surface applied manure placed on alfalfa and grass fields.

“What lead us to injection was because we were doing a lot of surface application on silage ground and we knew it really wasn’t right,” Severy says. “We couldn’t keep the manure where we wanted it and spread the rates that the fields needed without feeling like it was going to run off.”

With the new regulations, he does expect considerably more monitoring and oversight of custom manure application activities by state authorities in future.

“Pretty much our whole business area is in the Lake Champlain watershed,” Severy says. “I’m hoping that the spotlight isn’t on us too much because we have been forward thinking and are doing manure injection on our own before the State either makes us or is really promoting it. We have a handle on it, and we are the only ones doing it on a large scale.”

Matthew’s Trucking is doing its part to stem the tide of farm nutrients seeping into Vermont’s Lake Champlain by being among the few in the state to offer manure injection services.

He adds that the regulation changes may actually help to attract new business.

“We knew that these new rules were coming, so we really strived to take action before they come into force so our employees would have the mindset to watch out for ditches, streams and waterways. It wasn’t 100 percent new to them this spring,” Severy says.

Severy owns Matthew’s Trucking along with his father, Matthew Severy. The business is headquartered about an hour south of Burlington in Addison County. They operate an extensive manure management fleet and have been in the manure application business for the past 20 years, with the vast majority of their customers in the dairy business.

They will go as far as Saratoga, N.Y., and Vernon, Vermont, which is about 100 miles from home, to provide their manure application services, but the vast majority of their business is conducted within 50 miles of home.

“We work for dairy farms from 50 cows to 1,500 cows,” says Severy, with a fairly large number of smaller dairy farms still operating in their region, but then the numbers take quite a significant jump to the 700 to 1,000 head range. This size is considered large by Vermont standards.

Before starting his nutrient application business, Matthew Severy had a long association with the farm industry, working as a mechanic and then as a transport driver for milk and feed companies.

“He bought one silage truck with a 3,600 gallon tank to also use to haul a little bit of manure,” Severy says.

The business grew quickly with the purchase of tandem trucks equipped with 4,000 to 5,000 gallon tanks and surface application bars.

“As farms grew bigger and weather challenges became more of an issue, we wound up purchasing two John Deere 8000 series tractors pulling 7,300 gallon Houle tanks, and also added a couple of semi-trailers because the demand was that big,” Severy says.

He adds that their business really requires the right combination of equipment to service their customers properly, as that area of Addison County consists of heavy, clay soil that receives quite a lot of moisture. The tractor and tanker option has allowed them to land apply in conditions where it is too wet for tanker trucks to work in the field.

At present, they own two, 10-wheel tandem trucks equipped with Diller 4,500 gallon tanks, six semi-trailer trucks with custom-made tanks equipped with pumps and spray booms, two Houle 7,300 gallon tanks pulled with tractors, and two full drag hose systems with manure injector bars. The semi-trailer trucks are particularly handy with customers further away, as they can carry more volume and work well in light, sandy soil, where getting stuck in the field is less of an issue. These soils tend to exist in the Saratoga, N.Y., and Vernon areas.

“This option is really good for farmers because it cuts down their costs quite a bit and when the soil is hard and dry in summer, we can use the semi-trucks to top dress a lot of hay,” Severy says.

Having that diversity in their equipment fleet also allows Matthew’s Trucking to work steady from April 1 up until the manure spreading ban comes into place in Vermont on December 15. After fields with crops like corn are spread in spring, the company moves to grass and alfalfa fields through the summer, then back to cropland in fall once the corn is harvested for silage.

While they tried to provide manure injection from a tank, Severy says that given the small-sized fields in the area, the heavy, clay soil, and hilly ground, a drag hose system was a better option for them. They are able to lay out enough drag hose and have enough pumping power to be able to apply manure up to three miles (4.5 kilometers) away from the dairy lagoon. However, they typically operate both injection systems at the same time but for two separate customers, with each system using 1.5 miles of drag hose. That length of hose will normally cover most of the distance required to reach each customers’ land.

PCE-brand swing pipes are attached to their tractors, which is where the drag hose is connected from the pump at the lagoon to the tractor in the field. They only apply manure on land belonging to their dairy customers.

Their first manure injection system was supplied by PCE and was purchased in 2012. It is a chisel-type injector called a John Deere, in-line, deep ripper, “and we got a lot of good feedback about that,” Severy says.

It allows Matthew’s Trucking to inject the manure 10-inches into the ground and conduct primary tillage for the farmer at the same time. Demand from area dairy farms has grown significantly.

However, in the past few years, many Vermont farmers have been transitioning to more no-till and cover crop agricultural practices, partly to reduce soil erosion, which is a farm management practice that doesn’t mesh well with the company’s chisel-type injector system.

To continue to provide their customers with manure injection services when they were practicing no-till crop management, Severy was able to find a Dietrich manure injection tool bar also supplied by Bambauer a couple of years ago, which allows them to inject the manure about six-inches into the ground in this type of minimal ground disturbance scenario.

“One great thing about the Dietrich toolbar on 30-inch spacing is that there is not a ton of ground disturbance,” Severy says. “We are either able to inject into their cover crop, or we are able to inject and our customers are able to no-till plant the field. They are able to get the benefit of manure injection and no-till at the same time.”

The tractor and tank surface application combination comes into play when the application distance is such that using the drag hose system isn’t practical.

Although not as large as some drag hose systems in other parts of the U.S., Severy says what they operate is a good match for their area because they are typically only pumping a million gallons or less per farm.

“We’re not setting up at a big dairy and pumping for two weeks,” he says. “We’re sometimes at a farm for less than a day.”