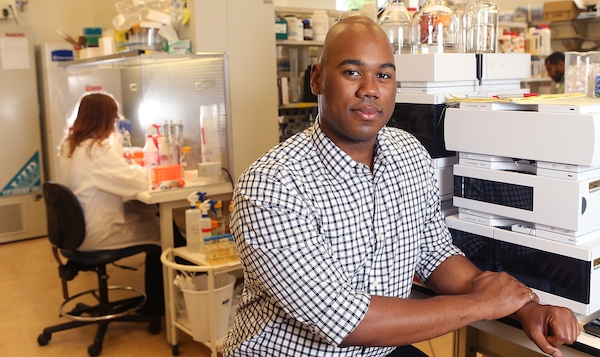 The U.S. Department of Energy's Career Award will fund Kevin Solomon's work using fungi to improve the production of medicines and fuels from biomass. Photo courtesy of Tom Campbell/Purdue.

Kevin Solomon, a Purdue assistant professor in the Department of Agricultural and Biological Engineering, plans to improve the production of medicines and fuels from biomass by using giraffe, wildebeest, zebra and horse dung.

His work recieved the U.S. Department of Energy Career Award, which supports the development of research programs by outstanding scientists early in their careers. The DOE will provide $750,000 over five years to fund his proposal, “Genetic Tools to Optimize Lignocellulose Conversion in Anaerobic Fungi and Interrogate Their Genomes.”

People use enzymes to create fuels from plants, fungi to produce antimalarial drugs, and E. coli bacteria to generate life-saving insulin. These systems are attractive because they are sustainable and rely on renewable plant biomass, but they are still wildly inefficient.

“Nature and biological processes are good at fixing carbon dioxide and turning it into biomass. But we want to break the chemicals in that biomass back into sugars that we can convert into a wide array of products,” Solomon said. “However, if breaking down trees were easy, they wouldn’t exist.”

The problem is twofold, Solomon explains. First, microbes exist to exist, only producing enough enzyme to break down as much plant material as they need to survive. To break down plant material on scales needed for industrial production requires microbes to produce a lot of enzyme. Second, scientists need tools to reprogram microorganisms so that they generate desired products such as fuels and medicines.

For years, Solomon has collected microbes from the fecal matter of sheep, cows, rhinos, horses, wildebeest, zebras and giraffes because they effectively break down the plant materials those animals consume. He’s particularly interested in a class of fungi with a diverse repertoire of enzymes.

“These animals have this microorganism in their guts that digests the food, turning those grasses into the sugars we want,” Solomon said. “If you think of enzymes as teeth, these fungi have more teeth than other organisms, allowing them to break down trees and other plant materials more easily.”

With this award, Solomon envisions developing CRISPR Cas9 gene-editing technologies and other approaches to modify these fungi to create fuel or medicines in a one-step process.

“Essentially you would feed engineered fungi grass, and out would come medicine or fuel,” he said.

The Department of Energy’s Office of Science has funded Solomon’s previous work. With the Early Career Award, he’ll leverage the high resolution systems biology resources of DOE labs and develop collaborations with government scientists and agencies.

“Kevin’s work holds the potential to turn plentiful, renewable resources into valuable products that improve the quality of life for humans,” said Bernie Engel, associate dean of research and graduate education for Purdue’s College of Agriculture.