Features
Diversity at every level

For Stuart Chutter, there’s value in diversity – in terms of cows, plants and people. 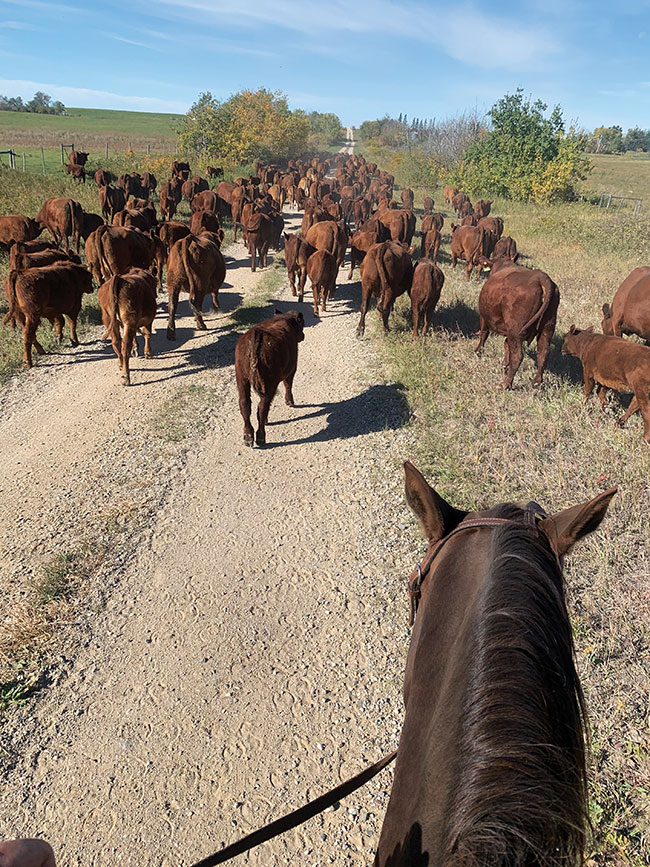 Stuart Chutter is easily recognized these days: he was a 2021-2022 nominee for Saskatchewan’s Outstanding Young Farmers program. Chutter runs a small purebred cattle and diverse forage crop operation near Killaly, Sask. Over the last two years, he’s also written and spoken publicly about his experience coming out as a young gay farmer and has been involved in discussions about how diversity on farms is portrayed.

Chutter, 36, grew up on a cow-calf ranch in rural British Columbia. As a kid, he never thought farming was an option for him.

“I didn’t have any expectations or opportunity for succession in B.C., so I set out to build a life and career for myself outside of primary production,” he says.

He earned a degree in economics and started a career in commercial lending in Alberta. Most of his clients were farmers, and as he got to know more about their businesses, he began to realize that it was possible to build a first-generation farm without independent wealth or inheritance. “Before I got into banking, I thought farmers had to be elite, special, wealthy or born into it. But what I learned from banking was that my customers were all people who just started,” he says. “Whether they moved from Europe and started a farm or sold their house and started a farm, at the end of the day they were passionate, believed in themselves and were willing to risk it all for their dream. I realized I could do that too.”

Within a year, Chutter had rented farmland and started a herd of 400 meat goat does. Soon, he realized he loved the work enough to do it full-time. He scaled up his operation with the addition of 200 ewes and quit his job at the bank.

After two years he’d outgrown his land and found a farm in southwestern Saskatchewan where he could work and graze in exchange for yardage and feed for his livestock, an arrangement that worked well. But six years in, he’d grown his herd to 1,000 breeding animals and paid off his livestock, and he was ready for the next step.

Four years ago, Chutter bought his own farm near Killaly. These days he owns 640 acres and runs a herd of 175 purebred Red Angus and Limousin cows. Both professionally and personally, he’s come farther than he ever imagined was possible.

At 33, he came out as gay, and shifted the narrative again.

“I’ve made a conscious effort to make being a gay farmer a part of my story to normalize that conversation as something of importance. Some people ask why that’s important, and [ask] why can’t I just be a farmer? But I didn’t see it growing up, and I didn’t know it was possible. I’ve heard people say, ‘You can’t be what you don’t see.’ If you can’t envision it, you can’t be it or grow into it. For me, visibility is important,” he says.

It was the dawning realization of the importance of diversity in healthy farming systems that helped Chutter realize he was ready to come out. 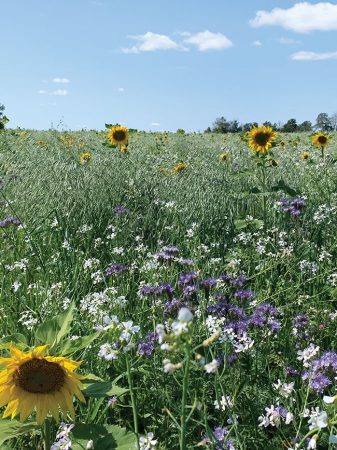 “When I started farming, I thought that if you were a livestock producer your job was to look after and market your livestock. And you do, of course, but the more I learned the more I realized that to have healthy livestock and a profitable business you need healthy grass. As I went down that path, I realized that to get healthy grass to make those livestock, you need healthy resilient soil. So my focus shifted from livestock to grass to soil,” he says.

When choosing forage species, he attempts to fill specific categories – for example, warm and cool season forages, tap roots, tubers, legumes and grasses – but says he also finds value in unplanned diversity when, depending on the growing season, “you find a plant that’s thriving or filling a gap that you never expected,” he says.

The same principle applies to animals: he’s had goats, sheep, cattle, chickens and swine, depending mainly on grazing needs. For example, sheep can take care of weeds while cattle efficiently convert grass to energy, he says. He transitioned to cattle after putting in high-value forages. “You look at the system and where there’s a role to convert that [biomass] to food,” he says.

But there’s even diversity between breeds of cattle, he adds, and value in cross-breeding them. Red Angus, he says, is a highly maternal, low input, productive mother cow, while Limousin offers high carcass and protein quality and is an efficient converter of feed to lean meat. “They’re both cows, but different breeds with very different characteristics, and by having two different characteristics is another way diversity can be used to make the farm more efficient,” says Chutter.

With his breeding herd, Chutter focuses on low-input and easy calving genetics based on a cow’s weaning production as a percentage of her body weight. Basically, he aims to run cows that are low-input, easy fleshing, moderate framed, with good feet for traveling and a high grass capacity, so he can keep them on pasture for as much of the year as possible. This also makes sense from a manure management perspective, he adds.

He sees cows as an environmental resource that’s crucial for regenerative farming, as animal impact on the land is a pillar of soil health and conservation and carbon sequestration.

He has the numbers to back up that claim. Beyond improvements to soil organic carbon, he says his farm is net carbon sequestered, meaning after accounting for methane emissions and transportation and processing emissions all along the supply chain, when a consumer eats a steak from his farm, its carbon footprint is negative.

“Consumer stereotypes on food production can be just as inaccurate as stereotypes of people,” says Chutter. “Cows aren’t bad for the environment. And gays aren’t out of place in rural agriculture spaces. You can sequester carbon and be a cow, you can be a beef producer and an environmentalist and you can be gay and take up space in agriculture.”

Whether it’s about soil health or identity, Chutter believes there’s room for the industry to advance in how it talks about diversity in farming.

“What’s important to me in celebrating diversity is celebrating diversity in its entirety – for me, [my identity as an] LGBTQ+ [farmer] makes it personal, but in agriculture we need to celebrate diversity in all ways,” he argues. “Our labor shortage issue, for example, is massive, and we’re not going to solve it if different people aren’t welcome. We can’t get our products to market without all sorts of diverse people, and we need them.

“Normalizing words like diversity, inclusion, equity and belonging – those are things we need to talk about not only from a social but an economic perspective. It’s important for us to realize there’s a business case for it as well.”

After Chutter came out, he was pleasantly surprised to find that the majority of farmers were supportive and welcoming. He’s had “amazing” conversations, particularly with young farmers, who share his commitment to diversity in farming. Agriculture can be polarizing, but Chutter believes in his community.

“There are so many moments in agriculture of people saying, ‘No, I get it,’” he says. “We’re getting to the point where we’re saying, ‘Yes, let’s make room for these discussions.’”