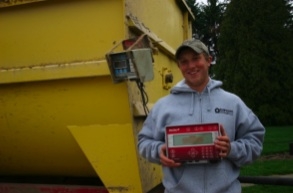 Jones was randomly chosen from the Digi‐Star Facebook sweepstakes, Why I Need a New Indicator.

Qualified entries had to “Like” Digi-Star’s Facebook page and post a picture of their current indicator with a caption explaining why they needed a new indicator. The contest drew applicants from around the country with a variety of interesting stories.

Jones learned about the contest at the WPS show in Oshkosh and entered just a few short hours before the contest closed March 31. His name was randomly drawn winning an indicator of choice valued up to $2,500.

Jones has been farming for two years on his own with 90 cows and plans to grow his business. He bought a mixer with a used scale display.

“The scale always (and still does) work really well,” said Jones. “Unfortunately, when the display and the side of the barn met, the display casing shattered.”

He had resorted to tying it to theold backing with baler twine. In addition to no longer worrying about it falling off the mixer, the new EZ 3600 allows you to batch recipes on the indicator itself and more importantly is easily upgradeable to TMR Tracker

Software, which allows the user to move away from manually entry of ingredients and recipes.

“Digi‐Star is excited to grow with this young entrepreneur as his operation expands,” said Carol Coulombe, Digi‐Star’s software sales manager. “It’s nice to be able to see and read this new scale in all light and weather conditions.”