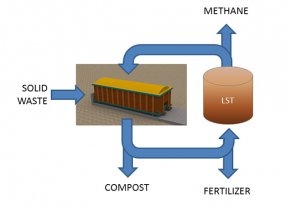 A diagram showing the flow of product through the Nexus Bioenergy system.

Many would say that solids are the most critical component to handle in a digester, but water is a critical factor as well, logistically and financially.

“There is a great deal of time and expense involved with handling the large volumes of water involved in a typical plug-flow system,” says Dr. Syed Reza, president of Nexus Bioenergy in Fort Collins, Colo. “This challenge to financial viability is avoided with our multi-stage design, which has a circulating volume that’s only 20 per cent of a typical plug-flow digester. There are no massive water storage tanks or lagoons, no tankers needed to move wastewater to the fields, and no centrifuge for processing the wastewater. The whole process is much simpler, and automated.”

Nexus Bioenergy was launched in 2015 by Syed Reza and two academics from Colorado State University (CSU): Dr. Sybil Sharvelle, an assistant professor in the Department of Civil and Environmental Engineering and her graduate student Lucas Loetscher, who is now vice president of technology at Nexus. They were initially tasked by the Colorado Governor’s Energy office with investigating how anaerobic digestion could best be applied to Colorado’s feedlots and dairies, and main barriers to adoption were pinpointed to be the relatively slow digestion rates and extensive wastewater handling requirements of existing digester systems.

“We saw early on that 30 to 40 percent of the capital expense of a farm digester was tied to wastewater treatment and disposal,” explains Loetscher. “Through much trial and error in January of 2009, I came to Sybil with a concept for a high solids anaerobic digester that has formed the basis of our technology at CSU and Nexus. Later that year, we were awarded a grant to begin researching this new concept.”

The pilot system at the CSU Foothills Campus allowed the team to gather information about overall performance and how best to scale up. Nexus is now gathering seed funding to build two commercial-scale units at two food processing plants in Colorado, one 1.5 MW and the other about 2 MW.

The Nexus Bio1 features a three-stage process. In the first stage of primary breakdown, liquid recycled from the third stage is added to manure or other feedstock such as food waste or poultry bedding. The liquid circulates and bacteria hydrolyze the biomass into a rich soup of intermediate organic compounds and minerals. This soup then flows to the second stage, a fermentation reactor where acidogenic bacteria break down sugars and other organic molecules into acidic intermediates. In the final stage, a high-rate methanogenic reactor, bacteria convert the organic acids into methane and carbon dioxide. Much of the digested leachate is recirculated back to stage one.

The optimized design of each of the three reactors, says Reza, allows the entire process to occur at maximal rates and increases throughput.

In terms of products produced in the Bio1, remaining solids from stage one are converted into a rich compost, and part of the rich stage three fluid is harvested to be sold as a high-quality black organic fertilizer – a product that fills a critical organic farming need. Reza explains that in California and other mountainous states, there just isn’t enough land or rain to breakdown plug-flow digestate, and the regulatory limits for nutrient spreading are also being reduced all the time.

“We designed our system so that we don’t require land application,” he says. “Our black organic fertilizer is being developed to be a drop-in equivalent replacement to organic commercial liquid fertilizer. It is of particular value to organic farmers because the National Organic Program-compliant commercial liquid fertilizers available on the market are just too expensive for most farms and ends up being a limiting factor in organic crop production. We can produce thousands of gallons per week from a single Bio1 system and make it available locally at rates competitive to synthetic fertilizers. The local organic commercial farmers we spoke with are quite excited at this opportunity. We aim to start field trials [this] summer.”

In addition to the low water requirements and the production of valuable fertilizer and compost, the Bio1 also provides the benefits of easily transportable components. Modules 20 and 50 feet long are delivered by truck and assembled on site in four to six weeks (compare that to 18 to 24 months to build a conventional tank-based digester). For dry cattle manure, a Bio1 unit that produces 1 MW of power takes up 2.5 acres of land and uses 150 tons of feedstock per day – roughly the output of a 30,000 head feedlot.

Through the use of different modules, a single Bio1 system can also accept and optimize the use of various feedstocks, from food waste to dairy manure to poultry bedding.

“So, it’s very exciting that a single project can accept waste from multiple sources,” Reza explains. “In addition, wastes of various solids contents are segregated into the appropriate reactors, with high solids wastes placed in the first stage, and soluble wastes such as milk processing water, run-off lagoon water or other food processing liquid wastes sent straight to the last stage.”

The ability to add modules over time, he adds, also enables projects to evolve in the face of potentially changing local conditions and reduces the financial risks in scaling up.

“Anaerobic digesters have a poor track record for financial success, but the modular nature, turnkey design and flexibility makes this system a totally different ballgame,” Reza concludes. “No food company wants to be locked into a long-term obligation. They want to be able to change their business focus, move a system to another site or relocate it on the same site, scale up or down, accept different feedstocks and so on. The Bio1 allows all that.”

“After we learn all we can from scaling up our first generation system commercially, we plan to then miniaturize our technology into a compact design to create digesters for hot water and heat production in the home,” says Reza. “A big benefit from this is the possibility of reducing trash collection and hauling costs. Most communities have at least weekly trash collection not because of volume, but because food waste starts to smell within just a few days. If the putrescible portion of waste is removed, then regular curbside collection could be reduced to perhaps just once monthly.”

Reza says that since about 75 percent of the cost of trash disposal is from curbside collection, this approach would cut down significantly on the carbon footprint from garbage trucks and could save each individual residence hundreds of dollars annually in waste disposal fees.

“Ultimately, we think our zero-wastewater technology is extremely suitable for becoming a standard appliance, easy to use with the simple push of a button,” he notes. “You’ll have your fridge, stove, microwave – and digester!”