A look at the number of antibiotic residues and antibiotic-resistant bacteria presently in manure and an update on treatments of manure that better destroy these materials. 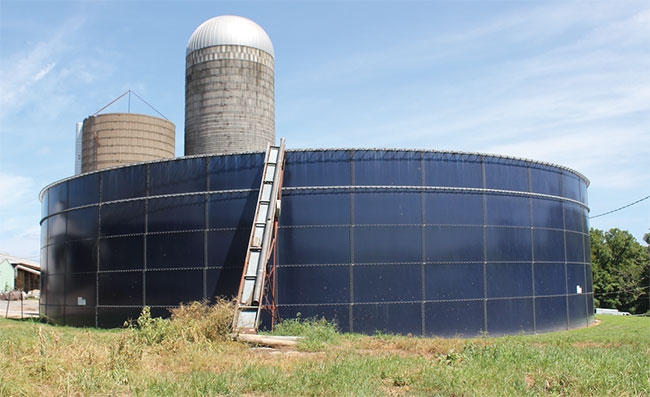 Scientists found that destruction of antibiotic residues and antibiotic-resistance genes in manure is much higher when manure is composted. Composting can be done in conjunction with anaerobic digestion, composting the solids left over after the liquid digestate is metabolized by digester bacteria. Diana Aga, proffesor, U of Buffalo

Due to regulatory changes, residue levels of some types of antibiotics have decreased significantly in manure over the last few years in Europe, North America and elsewhere.
Antibiotic use in livestock farming has been restricted to only the treatment or direct prevention of disease. However, those uses still add up to a large amount of drug residues ending up in manure, along with bacteria that have become resistant to some antibiotics.

The United States Food and Drug Administration recently published a report on how much antibiotic use in livestock farming has been reduced. The 2017 Summary Report on Antimicrobials Sold or Distributed for Use in Food-Producing Animals states that domestic agriculture sales of antibiotics important to human medicine and also approved for use in livestock decreased by 43 percent from 2015 (the year of peak sales) to 2017. From 2009 to 2017, they decreased by 28 percent, and from 2016 to 2017, sales of the largest category (tetracyclines) decreased by 40 percent. In terms of livestock species, the report’s authors estimate that most of these antibiotics (42 percent) are intended for cattle, 36 percent for swine, 12 percent for turkeys, five percent for chickens, and an additional five percent for other species.

However, other antibiotics that are not important in human medicine, namely the ionophores, are still being used in the U.S. livestock industry at levels similar to the past. They are used, for example, to treat a parasitic disease called coccidiosis that mainly targets young calves.

“There has not been much change in sales volumes over the last few years of these antibiotics and, in fact, the volume has gone up from 2009 to 2017 by 18 percent,” notes Diana Aga, a professor of chemistry at the University of Buffalo. “I can only speculate that this is because the number of livestock animals are increasing in the U.S.”

Aga has been studying the presence of antibiotic residues and antibiotic-resistant bacteria in manure for about 12 years. She adds that it is important to note that residues in the environment also result from human consumption of antibiotics – municipal wastewater and sludge contain some residues, and in some jurisdictions around the world, the sludge is spread in farmers’ fields. However, due to doctors being more careful with prescriptions, human consumption of antibiotics in many countries has been reduced. This is because of greater awareness of the problem of resistant bacteria. Initiatives such as One Health, which recognizes that the health of people is connected to the health of animals and the environment, have helped a great deal. Within One Health, scientists, doctors, veterinarians and others monitor and control public health threats and study how diseases spread at the local, regional, national and global levels.

There are two main ways that antibiotic residues and antibiotic-resistant bacteria in manure can be ingested by livestock and potentially grow within the gut, leading to antibiotics being ineffective when they are also ingested in the course of treatment. One is through manure being spread on fields, with antibiotics potentially leaching into groundwater and being given to livestock in contaminated drinking water. The other way is manure solids being used as livestock bedding, bits of which could be ingested.

Scientists found that destruction of antibiotic residues and antibiotic-resistance genes in manure is much higher when manure is composted. Composting can be done in conjunction with anaerobic digestion, composting the solids left over after the liquid digestate is metabolized by digester bacteria.

Research findings
Aga has studied two treatment systems that destroy some antibiotic residues or antibiotic-resistant manure: Advanced anaerobic digestion and reverse osmosis filtration. However, she notes that the main intention of these systems has nothing to do with removal of antibiotics; advanced anaerobic digestion is used to reduce odors and produce biogas, and reverse osmosis is used to recycle water.

“These systems are not common on pork, beef and dairy farms mostly because they are expensive,” Aga says. She notes that on large dairy farms in Idaho, for example, manure management using long-term storage lagoons and having the liquid constantly evaporate may be sufficient for most farms – odor emission is less of a concern, especially in open-lot dairy and beef facilities. However, in places like Wisconsin where many members of the general public are in closer proximity to the farm, advanced treatment systems are more common to control odor and to demonstrate sustainability.

Aga and her colleagues found that these advanced treatment technologies were not as effective at destroying antibiotic residues as expected. Both treatment technologies did little to cut down residue levels in solids; Aga and her team found that residues migrate from the liquid component of manure into the solid component during treatment. Indeed, solid manure produced after screw-press separation may contain higher concentrations of antibiotics than raw manure slurry. However, the scientists found that destruction of antibiotic residues and antibiotic-resistance genes in manure is much higher when manure is composted. Composting can be done in conjunction with anaerobic digestion, composting the solids left over after the liquid digestate is metabolized by digester bacteria.

With testing the effectiveness of composting, Aga and her team were building on earlier studies on poultry litter that demonstrated a reduction in ionophore residues of up to 70 percent can be achieved after 150 days.

“Overall, our studies show that composting is pretty effective due to the high temperatures that are achieved,” she notes. “Composting is not expensive compared to anaerobic digestion, but it’s not easy to implement for large operations dealing with large volumes of manure.”

When asked about whether she thinks many farmers will compost manure if there are no financial incentives to do so, nor regulations requiring it, Aga is doubtful.

“If they can sell their composted manure, that helps,” she says, “and public perception is also an incentive. Farmers don’t want the general public to feel negatively towards farming, and odor is a factor in that. Composting also shows that farmers are trying to be more sustainable. I think government regulation may come, but it’s a long way away. However, even if not every farmer composts manure, the ones that do will still make an impact on reducing the risk of spreading antimicrobial resistance through land application of manure. The loss in the efficacy of many antibiotics for treating illnesses is a serious threat.”

Moving forward, Aga and her team are planning research initiatives looking into the effectiveness of using grass buffer strips to prevent manure runoff when it’s spread on farm fields.

A review of current research
The Livestock and Poultry Environmental Learning Community recently presented a webinar entitled, Reduction and fate of manure pathogens and antimicrobial resistance. The webinar included a handful of presentations from today’s leading research scientists.

Zong Liu, assistant professor in the department of biological and agricultural engineering at Texas A&M University, reminds us that pathogen reduction in solid manure can be achieved through, composting (heat), the most common method, and pelletization (heat and drying).

In liquid manure, methods of pathogen reduction are: digesters (heat); lagoons (nutrient depletion so pathogens have nothing to feed on); the use of cationic polymers to make larger particles (flocks) that precipitate to the bottom for easy removal; high-speed centrifugation; specialty mushrooms that may also kill pathogens (through a biocidal effect); and treatment with active iron media.

Ed Topp, research scientist with Agriculture and Agri-Food Canada, notes that some bacteria can persist in soil for years, and he is studying how much AMR is occurring (in Clostridium bacteria) in existing soil bacteria or in bacteria added through manure application.

Lauren Wind, graduate research assistant at Virginia Tech, is studying which pre-application treatments are more effective at reducing AMR genes in soil bacterial populations. She recently tested application of composted and raw manure from cows given different antibiotics and whether type of crop (root and leafy vegetable) makes a large difference. Over time, she tested soil bacteria under the various study treatments for resistance to five antibiotics (some given to the study cows and others important to human health).

For all the presentations and the Q&A sessions from the The Livestock and Poultry Environmental Learning Community recently presented a webinar entitled, Reduction and fate of manure pathogens and antimicrobial resistance, visit lpelc.org