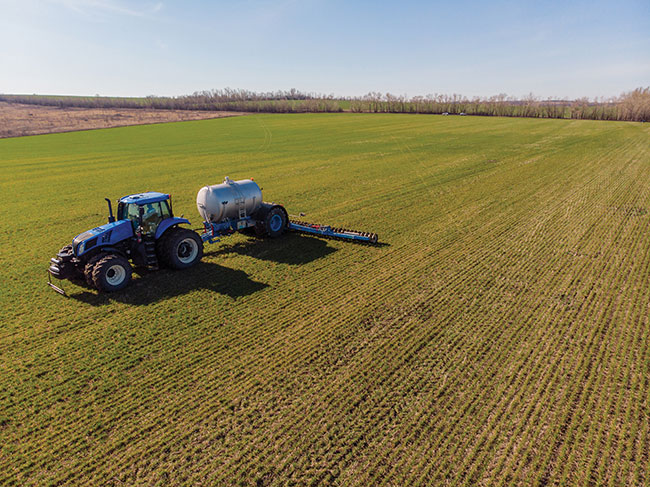 It’s a deceptively simple question: “When does spring start?”

Despite March 21 marking the official start of the season, the more nuanced determinants – temperature, precipitation, soil conditions – change from year to year. The arrival of spring, nebulous as it may be, is anything but leisurely for manure applicators. For most, it means being on high alert, waiting to pounce and capitalize on the exact right time to begin spring application. It’s a double-edged sword – the start of the season is unpredictable, but with such a small window for application, lying in wait for too long can lead to disaster.

“It’s basically a ‘seat of your pants’ situation,” says Chris Yungblut, territory manager for JBS Equipment. JBS, which exclusively sells equipment for dry manure application, specializes in producing machines that can haul large amounts of product while applying as little pressure to the ground as possible. Yungblut says spring is a time when applicators need as many options available to them as possible due to those small windows. Apply too early, he says, and “you could get into situations where you’re causing more damage than it’s worth, where it’ll sometimes take five to 10 years before that damage is reversed.”

Between applying early, applying fast and working odd hours, spring application is filled with good intentions.  But the actual conditions can scuttle the best-laid plans.

Here are some debunked myths and misconceptions about spring application, helping applicators make the most of this finicky season.

Wrong, says Robert Meinen, senior extension associate at Pennsylvania State University Extension. “Here [in Pennsylvania], we have farms that have accumulated manure all winter long,” he explains. “So your considerations actually need to start in the fall. Think of it as nutrient placement instead of application: can we properly place our nutrients in the fall to maximize our storage options throughout the winter? We’ve been in situations where we’ve gotten to the end of March and we just could not get on the field. Our manure storage got higher than we were comfortable with.”

Meinen says, from a storage perspective, some degree of planning should have started in October or possibly even September, for the sake of minimizing risk.

MYTH: Once you know what to expect, you can fall into a comfortable rhythm with spring Application
No matter how “seasoned” you are at application, there may never be a natural rhythm to spring application. The “seat of your pants” mentality plays true year after year.

“The window of opportunity is so short,” Meinen says – not just in terms of the days on the calendar, but even the time of day when application is most effective. “There might be six hours within a 24-hour period where the ground is firm enough for us to travel. It might be two days out of a week when the soils aren’t saturated from a rain or snow melt. It might be that one week in early May when we haven’t had rain, but the soil temperature has increased enough. That can be hard, because you’ve got a farmer saying, ‘I want you here now, because it’s going to rain next week.’”

Besides adjusting schedule expectations, equipment adjustments may need to happen. While some companies specialize in machines that are built to minimize compaction – one of the most crucial aspects of spring application – most applicators still find themselves in precarious positions regardless of what type of machine they own.

“While part of your planning involves looking at your weather forecast and knowing what it’s going to do, you also have to look at how much your equipment weighs and how much it holds,” says Erica Rogers, environmental management educator at Michigan State University Extension. “If you have to absolutely spread that day, you might have to go out with some lighter loads. Flotation tires can sometimes help out with that, and I know some applicators who will even take air out of their tires.” While not everyone does it, Rogers says she’s seen it used as a way to get away with carrying a little more without compromising safety too much.

Pair that with the odd hours spring work requires, and there are some very real risks that are unique to the time of year, Meinen says.

“I talk to a lot of haulers who say, ‘I’m going to start working at 2 a.m., and as soon as the sun hits the field I’m done,’” Meinen says. “It’s pretty common in a scenario where a custom operator is providing that service to a farmer who wants to minimize the risk of damage to his soil. The best option is to get it on the field when the soil is frozen.” But that also means long, odd hours, sometimes overnight work: all situations where Meinen says the worker is more prone to accidents. “You’re tired, you’re facing sleep deprivation. A lot of things come into play with that type of scenario, and it can be very stressful for the operators.”

In the Midwest and Northeast, Fronczak says, road conditions are also horribly unpredictable at this time of year. “In Michigan, we might see 60 degrees one day and then the next, we have three feet of snow. Road conditions can get very dicey, very quickly. When you get big pieces of equipment on the road, that presents a different scenario than other manure safety issues we talk about.”

MYTH: It’s all or nothing
Despite talks of tight windows and pulling all-nighters to get the job done, in some areas, Fronczak and Rogers argue there are options to do a split application. Fronczak says she sees application most typically split into three parts, often in a knife application method.

“The idea is that you take the nitrogen, which would have typically been put on in one shot, and apply it when the plant needs it the most. You’re spreading it out and not losing it,” Fronczak says. “Only a minimal amount is going into the environment, so you’re getting more bang for your buck.”

The flexibility to do this will depend on storage capabilities, but in Michigan, where permit farms are required to have at least six months of storage, it makes sense. Rogers adds that this isn’t as feasible for smaller farms, but for commercial farms that are designed for such storage, it’s much more cost-effective.

MYTH: You’re destined to bicker with neighbors
Manure application isn’t typically associated with positive neighborly relations, but Rogers says there’s more that can be done than one thinks.

A study out of Pennsylvania State University found that social and psychological factors can play a major role. “There are, of course, some very real smells,” Rogers says. “But the study found that essentially, if a neighbor has a good relationship with the farmer, they tend to notice less odors than those who don’t. And if a farm is more aesthetically pleasing and cleaner, the neighbors notice the odor less.”

Rogers recommends the simple act of approaching neighbors. “Tell them, ‘We’re going to be spreading this season, are you going to be having any parties?’” Other recommendations include incorporating manure in order to mask the odor slightly, or planting tree lines to eliminate the sight of manure heaps. “People smell with their eyes,” she adds.

Spring application is still complex – there are a lot of dos, a whole lot of don’ts and a surprising number of “depends.” As Yungblut puts it, “you’re pretty much at the mercy of the gods.” But experts agree that the more you can get under your control ahead of time, the less turbulent it will be. •