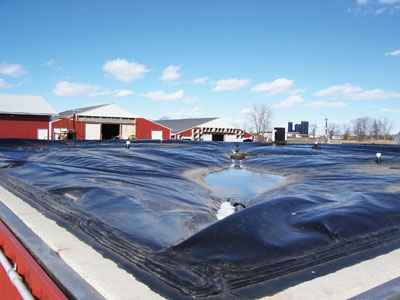 RCM is celebrating 30 years in business in 2012. The California-based business has anaerobic digester installations around the world, including this digester at Patterson Dairy Farms in Auburn, N.Y.

RCM turns 30 years old this year, making it one of the most established digester manufactures in the field.

President and agricultural engineer Mark Moser recalls those early days, when it was just two guys and a vision.

“Not much was known about digesters in the commercial sense,” he says. “There’d been laboratory work and there were municipal digesters, but ag digesters just weren’t available. So, I got out of Cornell (University) and convinced them this would be a cool idea.”

Mark made his case and was soon building digesters for industry leaders willing to work with the new technology. As expected the first couple of digesters had some bugs, but the third one was “pretty good,” says Mark. “In fact, it was good enough that it’s still running today.”

Today RCM has more than 85 digesters in operation on dairy and hog farms. And, being one of the original companies in the market, RCM can also lay claim to the oldest digester continuously running. In its 30 years of operation it’s been running almost flawlessly. The engine has been rebuilt five times, but it was only down once 17 years ago to be cleaned.

Challenges
As the industry matured, the ongoing challenge was to produce a better, more reliable digester.

“One of the focuses was creating a digester that worked well with minimal supervision, because that’s what farmers need.

Back in the ’80s and into the ’90s, everything was manual operation. With today’s computer technology, this is a great time for automatic operation. Not that it can run itself, but it has gotten to the point where if there is a problem, the digester will call you and you can get out your iPhone and see how the engine is running.”

EPA comes calling
There have been plenty of highlights for the company over the years. For Mark personally, it was in the mid-’90s when he was selected as the senior technical advisor of the U.S. Environmental Protection Agency’s agSTAR Program.

“At the time, 80 percent of the digesters failed and 20 percent of them worked and it just happened that the 20 percent were ours.” That led to Mark’s invitation and his involvement in the program over the next five years.

“We were able to create an education program and develop demonstration digesters that allowed people to believe that digesters were reliable,” he says.

The program was a success. Through it more successful digesters were introduced, more companies entered the market building reliable digesters, and the industry grew.

Digester dollars
RCM has digesters operating worldwide, including Japan, Chile, Ecuador and Mexico. In fact, RCM built the largest hog digester in the world in Chile that handles 238,000 pigs and has been running since 2003.

The reason farmers turn to digesters is the simple fact that it makes them money, says Mark. Energy produced is used to run the hog or dairy farm and the excess can be sold and put on the grid. A dairy with 1,000 cows could save/earn a $100,000 in electricity.

“We’re working in mostly states with high electric costs, because that’s the easiest cash value for an owner to realize.”
For that reason RCM does a lot of business in states like New York, Vermont and Pennsylvania.

Many benefits of digesters
Although creating power is the primary reason to purchase a digester there are numerous benefits once one has been installed.

Somatic cell count – Two years ago in Pennsylvania, RCM conducted a study of top dairymen. All reduced their somatic cell count after switching to digester and solids bedding, and a lower cell count results in better prices for milk.

Odor control – Odor is eliminated through the digestion process. “In New York, in order to get a dairy built near a town, the owners decided to put in a digester to mitigate the animosity from a nearby neighborhood,” says Mark. “We took a busload of residents to another of our digesters that was about 30 miles away. As they stood beside it, we asked, ‘If you’re 500 feet away from this, is this going to be a problem for you?’ The neighborhood opposition was satisfied and that dairy got built.”

Manure spreadability – Manure that’s been through a digester is thinner and doesn’t clog machinery as much. “And because of the change in the manure’s characteristics after digestion, you can haul it shorter distances because you don’t have to avoid the neighbors,” says Mark.

Heat – In colder areas digesters can offset a good amount of building heating. One farmer was able to heat his home because the digester was nearby. “We provide heat and hot water at most all of our dairy installations. We also have people using the waste heat to dry corn and pasteurize milk,” says Mark.

Designing the digester
Today, RCM employs about 14 people. It’s headquartered in Oakland, Calif., and has offices in Mifflintown, Penn., and near Clymer, New York. They partner with local engineers and equipment suppliers to take the products to the farmers.

Because each farm is different, RCM believes each digester should be tailored for the operation.

“Our goal is to integrate the system so it works with the farm versus being an appendage” says Mark. “We work to design it into the farm and make it easy to operate. That’s the key to success – easy operation. An operator doesn’t want to walk an extra 100 yards just to look at an engine.”

Of course some farms offer more design challenges than others. For example, if manure is headed from the barns in different directions, it’s a more complex design than if the manure is already being collected in one spot. Topography can also create unique challenges. But designing the right digester also requires looking and planning ahead – installing a system that will work for the farm 30 years from now.

“The majority of our clients are family farms in the U.S.,” says Mark. “They are people who are going to stay in business, who believe in farming as a lifestyle – not just to subsist, but to prosper.”

The clients are also the larger farmers. With this kind of technology there is no “smaller size” says Mark.

“It starts to make sense at 400 cows. The sweet spot in dairies is about 1,000 cows. That’s where all the equipment is optimized. Bigger than that, it gets a little better, but from 400 to 1,000 the return on investment rapidly improves. And with pigs, about 10,000 finish hogs is the sweet spot.”

The next 10 years
As RCM turns 30, it’s hard not to look ahead and wonder where it will be when it turns 40 in 2022. Ideally, Mark would like to see a couple hundred more digesters out there – in the U.S. and abroad.

Over the past three decades, RCW has learned that sales depend not only on the economy, but on the country too.
“Sometimes the economy isn’t so good in the U.S., but it’s great somewhere else. For that reason, we have lot of international work, but the majority of our work is still here in the U.S.”

At the end of the day though, Mark says for him it all comes down to installing the right technology for the farmers.
“We build four different types of digesters depending on what the owner needs. We look at what works for them, and the best economics. We can build a complete mix, a plug flow, and even covered lagoons. We can do that because it’s our own technology that we developed. We understand it and know how to apply it.”

He doesn’t believe he’ll ever get tired of watching the day it all comes together at the farm.

“It’s always a big day. We’ve been working on construction for a year and then suddenly – shazam – it’s making gas.

That’s when they believe.”